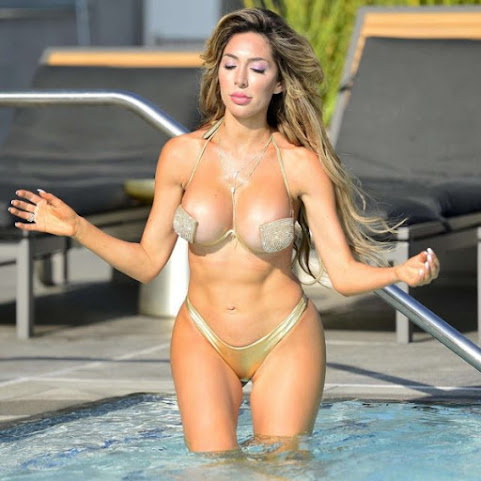 Just a couple of pop culture news links that offer a peek at the world of celebrity . . .

Saw1st: Farrah Abraham Booty in Bikini Photoshoot at a Pool in Los Angeles

Closer to home, these are the nicer news items that are also on our mind . . .


How do Bird's new Cruisers fit into KCMO's approach to disruptive innovation?

With a cushioned seat for two, the new Bird Cruiser's potential arrival in Kansas City this summer would ride within KCMO's approach to emerging technologies and disruptive business models. Featuring 20-inch wheels, the electric Cruisers travel uphill in areas like Kansas City's downtown with ease, according to Bird, and are a new take on the shared fleet concept that debuted in summer 2018 in the metro.

RIP, McDonald U.K.'s "Kansas City Stack" burger-England hardly knew ye. Your double bacon cheeseburger-which allegedly featured a "smokey steakhouse sauce"-came and went in the blink of an eye across the pond. But it was just long enough to enrage an entire city who found your marketing of the sandwich to be disingenuous, disconcerting, discombobulating and...


Tax subsidies for downtown KC office tower with no tenants? That should be a hard no

An ordinance in Kansas City authorizes city manager Troy Schulte to work on a development agreement on Strata, a new office tower in the Power & Light District. It would be the first major new office development since 1991.

The Salvation Army and KCP&L will hand out 600 fans to people and families in need to get them ready for the summer heat and humidity. The fans will be distributed on a first-come, first-served basis Thursday from 8 to 11 a.m.

A firsthand experience with a mysterious Craigslist seller served as fuel for Kansas City-listed startup Swappa's latest innovation of the local marketplace: Swappa Local. "I exchanged money with the seller, we both drove off, leaving the parking lot at the same time," recalled Ben Edwards, Swappa founder and CEO.

The name you are born with isn't always how you are known. Such is the case with Moving Arts, which began existence as the Kansas City Dance Festival and now, seven years in, has evolved into a dual-city summer company: a four-week residency with performances in both Kansas City and Cincinnati.

(KCTV) - It's heating up across the area, and the humidity is also rising. It's a great set up for severe weather in parts of our region, namely northwest Missouri, far northeast Kansas, southeastern Nebraska and southwestern Iowa. A severe thunderstorm watch is in effect for Atchison, Holt and Nodaway counties in Missouri until 10 p.m.

Yes and getting back to fundamentals there are many city's in this country that have bad leadership, and KC leadership obviously ranks in the top 5 worst of all of them.

In about four years the conditions on KCMO's Streets will starting looking like the "Slums Of Mumbai, Delhi,... & Manila"

The democrats are trying to turn the U.S. into a third world shithole.

They have already succeeded in California, once the land of milk and honey, now a wasteland of highest taxes in the nation, free health care and education for illegals, high crime rates, homelessness, drugs, needles, defecating on the streets. The wealthy elites all live in gated or armed patrolled areas and do not have to deal with the results of their programs.