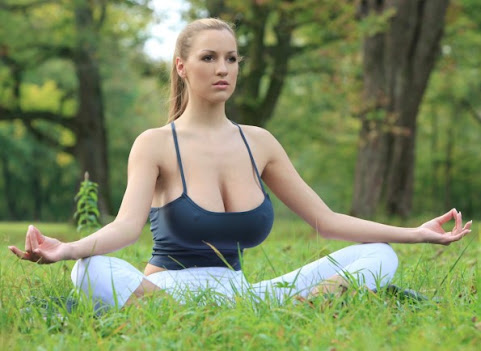 In the spirit of today's historical implication but with a vision of the future, we take a moment on #TBT to remember that hottie Jordan is our favorite German import of all time despite the fact that she has toned down her classic chesty game (as seen above) and focused on fashion and fitness for her 2-MILLION Instagram followers.

Similarly, we offer these pop culture insights to ponder:

Fast Company: I took a 30-day meditation challenge. Here’s what it taught me about managing anxiety

PsyPost: Study -- 15-minutes of meditation associated with similar effects as a day of vacation

Close to home we consider these local news links, take a look:


First, They Ousted The Superintendent. Now Center School Board Plans Search For A New One

Newly elected school board members for the Center School District hadn't been seated for even a week this spring before board president Marcie Calvin called for a closed meeting. That session set in motion the unexpected and forced departure of district Superintendent Sharon Nibbelink.


Chris Harris transformed a blighted neighborhood; now his effort is hitting the road

Teaming up with America's car clubs is driving a local community change effort to a nationwide scale, said Chris Harris. "I don't want to stop here," said Harris, owner and operator of the Harris Park Midtown Sports and Activities Center - officially shifting gears to a "Phase 2" after seeing the positive change caused by work to erase blighted land from the Ivanhoe neighborhood on 40th and Wayne.

The National Weather Service said that in more than 120 years of tracking weather, this is the wettest year on record for Kansas City.Only half of the snow pack has melted, meaning water levels in some places likely will still go up, even if it stops raining.The Missouri River has already set all-times records this year."This is a chart by the (Army Corps of Engineers) that shows how much storage is left," said National Weather Service hydrologist Scott Watson.Watson works as one of only four hydrologists serving Kansas and Missouri.

BUCKNER, Mo. - Recent flooding has Jackson County health officials warning people to get their tetanus shots. Officials say people dealing with recent flooding and storm clean-up are at a greater risk for tetanus, also known as "lockjaw." "You've got to be careful if you get into that river water.

Jordan sure has some nice big titties. I would like to screw her real hard and deep.

Jackson county residents need the tetanus shot because KCMO had sewer lines, failed infrastructure, break in the west bottoms and are releasing raw sewage into the Missouri river. This, in turn, causes tainted and turbid drinking water which the 25 million anally tourists consume by the gallons.

Whoa! You're jumping right in WITHIN TWO MINUTES of the comments, proving you are a sorry, bigly triggered troll bitch. What. A. Weiner.

No. Your mouth is.

MilesMotown said...
Jackson county residents need the tetanus shot because KCMO had sewer lines, failed infrastructure, break in the west bottoms and are releasing raw sewage into the Missouri river. This, in turn, causes tainted and turbid drinking water which the 25 million anally tourists consume by the gallons.

Why is sLIE continually spending millions on failed ideas to get people to ride toy train? How much money will he spend on this “art in the loop” bullshit? I can’t wait for his drunken fat ass to be gone.