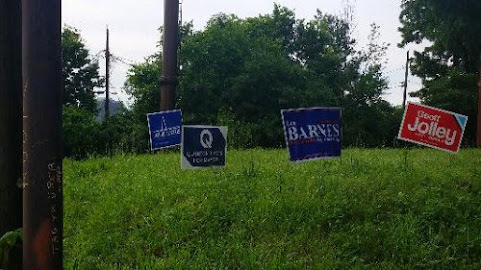 Campaign signs litter an abandoned and overgrown lot near the urban core is most accurate KCMO silly season metaphor.

And so, here's the Sunday morning collection of news links we're checking. Take a look:

Guide To June In Kansas City


June 2019 summer activities- something to do every day

Summer is special in Kansas City. We want to help you make the most of it. So we've compiled the ultimate calendar of events and activities with something to do every single day this summer, beginning on June 1 and stretching all the way through Labor Day.

Gov. Mike Parson and a bipartisan group of local lawmakers celebrated the signing of the "Border War Bill" that will end tax breaks for companies moving from Missouri to Kansas, and vice versa, if both states enact the rules. .

Leaders of Symphony in the Flint Hills, an organization whose main event is an annual outdoor concert by the Kansas City Symphony that draws as many as 7,000 people, canceled the event this weekend after storms damaged the site of the performance.

Down To The Wire

KANSAS CITY, Mo. - City Hall will look a lot different after Tuesday's election, which will turn over multiple city council seats and choose Mayor Sly James' successor. With the finish line in sight, 41 Action News followed both candidates for mayor, Jolie Justus and Quinton Lucas, on Saturday as they made a final push for your vote.

Kansas City artist Ryan Wilks' new exhibition at the Leedy-Voulkos Art Center attracted a group of women who formed a circle and prayed. It's not uncommon, Wilks says, for Christians to offer help with eternal salvation. Wilks used to be offended by the behavior, but in this case it only provoked a shrug.

In case the details have become a bit fuzzy over time, here's why Cleveland Browns running back Kareem Hunt is no longer a member of the Kansas City Chiefs: Video of Hunt kicking a woman in a Cleveland hotel surfaced via TMZ in late November 2018.

Soggy Week In The Works


Sunday morning rain south of I-70, rainy pattern ahead

Hide Transcript Show Transcript IN TERMS OF OUR WEATHER TODAY, WHAT IS IN STORE FOR DADS? PETE: IN STORE FOR DADS? GREAT FOOD MAYBE. KELEIGH: CAN THEY BARBECUE? PETE: I THINK WE'RE OK. ESPECIALLY THROUGH THE EARLY PART OF THE AFTERNOON TOWARDS THE METRO AREA NORTHWARD. ACTIVITY. WE HAVE HAD SOME THUNDERSTORM ACTIVITY.

To everything Turn Turn Turn
There is a tax incentive