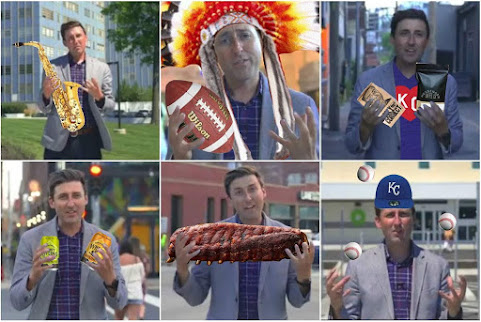 The 4th District Kansas City Council contest should be fun. If the newspaper can't win an in-district council race in Midtown then they don't really matter anymore . . .

NEVER MIND THAT JACKSON COUNTY PROPERTY TAXES HAVE NEARLY DOUBLE BUT THE  SO-CALLED PAPER OF RECORD HASN'T MADE A PEEP!!!

And so, this pick will make or break Kansas City print media once and for all. Or at least extend their death spiral.

The contest is still anybody's game.

In the primary the margin was razor thin:

TKC doesn't make endorsements. We only serve to provide snarky info slathered in cynicism with a side of hotness . . .

In essence, this vote is:

A fight betwixt a developer-friendly cycling activist who helped destroy Armour Blvd and wants HALF A BILLION BUCKS FOR BIKE LANES AGAINST A firefighter friend of Congressman Cleaver who likely wants to keep the City Hall PENSION GRAVY TRAIN running.

Meanwhile, the newspaper desperately wants to play kingmaker in a contest decided by less than 200 votes.

Good thing Jolie got out, she would have lost this race in the primary.

Proving once again that in KCMO "politics", it's not the cream that floats to the top.
Out of a population of over 460,000, it's just impossible to find even a couple regular folks who want to contribute to their community by serving in public office.
Grifter central!

Tell me this is just a terrible nightmare, there is not one good choice for any clowncil district, not one. sLIE set the bar so low that now any and all the crooks are muscling out the honest and decent people. Thanks sLIE, you lyin crooked bastard.

Whoever the Star endorses, I will vote for the other candidate. In this race, both of them are unacceptable and unworthy of a vote.

Its time for MO to put none of the above on the ballot. If NOTA wins the office becomes vacant and the two losers cannot run again.


Here's the funny part about this....That women in Hyde Park who was bitching about her taxes going up so high had a Bunch sign in her front yard, I guess she doesn't have enough brains to know he's a silent partner in the raising of taxes and all of the other schemes in KC. Now that's funny! Suck it up lady, you're going to pay big!

How much KC Tax money has Bunch stolen already through that phony-assed "Bike/WalkKC" fiasco he runs?
Now he wants to get his hands on HALF A BILLION more?

Which one's the bike advocate so I can vote against him?

Oh sure, the Falling Star is silent on taxpayers' pockets getting dug into deeper, while they're not paying their fair share.


Jolley will be scamming taxpayers for yet MORE overtime and pension bennies for Democrat greedy Firefighter union slobs.

Before urging more debt for more bike Lanes let's just focus on cleaning up the ones we have. Debris and glass and sand all over them. I think 90% of the money for bike Lanes or the whole"multi modal transit" fad is sucked up for salaries and consultants and community development non-profits.

-radish on a ten speed, swerving a broken bottle

All Bunch wants is the $400 million from taxpayers for his bike stuff.

Putting this guy in is not very smart.

Jolley is a smart, dedicated guy who is willing to give up his jobs as a firefighter and as a Congressional aide to SERVE on the Council. He is the opposite of flashy -- and he is not likely to go off and spend hundreds of millions of tax dollars on an experiment for bikes and scooters.

He is the kind of guy who notices that "protected bike lanes" like those on Armour will always accumulate debris and snow because streets ALL slope to the curb. DUH! And he notices that forcing cars to park in the middle of the street to create those lanes reduces the ability of emergency vehicles to respond. (Ladders cannot reach as high from out in the middle of the street. DUH!)

Of course, REALITY doesn't matter when you really, really want something, does it?

P!ease spare us more of the naive bike boy. One dimensional supported at Bike KC with our tax dollars. If you like Armour Blvd, he will give us lots more.