KANSAS CITY SOCIAL MEDIA DEBATE: IS THIS NOOSE IN WALDO A THREAT AND SHOULD HOMEOWNER CALL POLICE?!?! 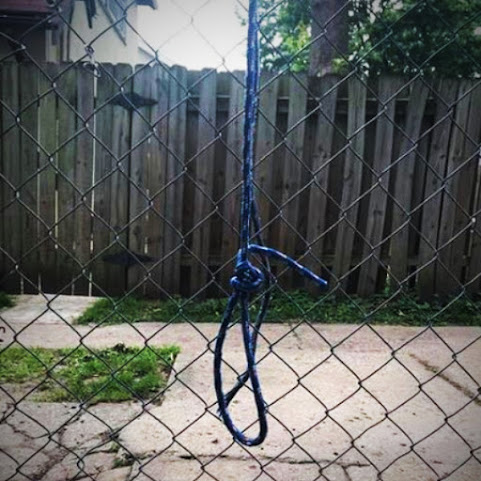 A bevy of local online group debate, fear and suggestions have emerged on one of the more popular Internets hangouts after some bungee cord was left hanging on a fence.

Here's the sitch from friends of the homeowner who believe the rope constitutes a threat . . .

"I need advice. I just got home to find a noose hanging from my back gate. Do I call the police? We’ve been harassed about not getting rid of a non-working car the last week and even received a nuisance letter. Don’t know if that has anything to do with it. What do I do? Non-emergency number?"

So far the consensus is that security cameras might solve the problem and bring the homeowner some piece of mind.

NEIGHBORS NEAR WALDO REPORT THAT THEY'VE ALSO BEEN THREATENED BY ROPE TIED AROUND THEIR HOMES!!!

HAVE HATERS LET LOOSE WITH NOOSE TERROR IN KANSAS CITY?!?!

The discussion might be more neighborhood gossip than news but still points to rising suspicion, fear and politically charged debate in this neighborhood that's coping with an increase in crime like many other parts of Kansas City.

Could be a threat, these residential situations get out of control very easily. Generally people should stay off others property and in places like Waldo that don't have many fences but the homes are very close, that has always been a problem.

Waldo is such a dump, not the place is used to be by far.

What you do is take the rope and use it to tie things. That's what a rope is for.

Just take it down and go about your business

It is a shy person inviting you to go bungee jumping with him.

That's not a noose, hangman's noose or noose knot. A tautline hitch more like it, but it really appears to be something an amateur would put together to hold a stray dog, or something left on a sidewalk that someone else tossed up on a fence. NBD either way, I'd save the rope and move on (or get your POS car out of the yard, I move mine every time the POPO comes by and chalks my tire location).

lol someone posted this pic on social media because they felt threatened. We live in weak times

More than likely put there by some SJW to stir shit up.


Imagine feeling so afraid of this shitty rope you feel the need to call the police. Weak.

^^^^ Agree. I think we have to look at it as a hoax until it's proven otherwise, that group TKC is talking about is notorious for getting tricked.

Social media is nothing but hoaxes.... I would a shoved that rope hitch up whoever bitched about my old car

Look closely, it's a threat to any local dog hanging around. Waldo is really going downhill.

It's a piece of rope, so get a fucking lie and stop being such a pussie.

I saw Jussie with that rope last night.

RUN! RUN YOU MFer RUN! RUN down the Middle of MLK BUT RUNNNN


Get a camera so you can see who does it then call police with pictures and get a gun.

I don't think it's a threat. Although, you should hang yourself with it you stupid pussy.

Waldo is such a shithole that a piece of rope on a fence should be the least of your worries.

Maybe it's not a threat but a suggestion.

One person's noose is another's leash.

The responsible thing for you to do is to put your head through the loop and then fail your legs like a gator on a limb line. You’re welcome.