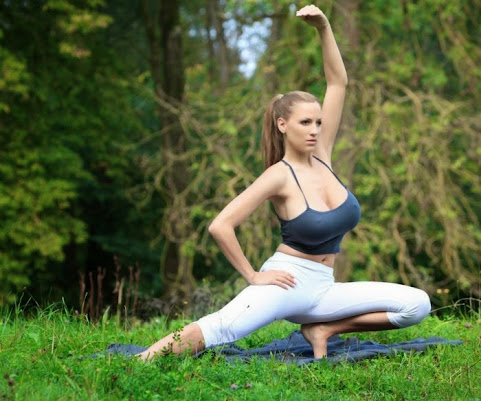 With respect to hottie Jordan we offer a quick review of exercise routines to start the weekend. Take a peek:

History.com: Yoga Landed in the U.S. Way Earlier Than You'd Think—And Fitness Was Not the Point

Closer to home, here are more than a few nice links this morning:

The night of his high school graduation, Daniel Edwards and his friends looked out at Kansas City from a fourth-floor window at Lincoln College Preparatory Academy on 21st and Woodland. They could see vacant property in every direction, and as they prepared to head off into the world, they joked about coming back as grown-ups to buy an empty block and start their own neighborhood.

A woman was killed Wednesday afternoon during a large argument outside her home, Kansas City police said. It is unclear if she was involved in the altercation. The homicide was reported in the 5000 block of Chestnut Avenue. A suspect is in custody.

U.S. Immigration and Customs Enforcement is expected to begin arresting and deporting thousands of migrant families in 10 cities across the country as early as Sunday, according to sources familiar with the planned raids.

Strange lights over Kansas City, Missouri, Thursday evening had locals - and even the National Weather Service - stumped for a while, according to reports.

KANSAS CITY, MO (KCTV) -- Royals fans haven't seen much of Salvador Perez since the catcher is spending the season recovering from an elbow injury. Despite that, Salvy shared a video on Instragram of a gender reveal party at his home. He is clearly excited to be having a little girl.

CLOSE UMKC Roos (Photo: Logo) The Roos are coming back to the Summit League. Summit League commissioner Tom Douple announced Thursday that the University of Missouri-Kansas City will rejoin the conference on July 1, 2020 with all 16 of its sports slated to compete in the Summit League beginning with the 2020-21 season.

Saturday afternoon will be warm and dry. Strong to severe storms are possible by evening.

That’s fine and dandy that they want to restore an abandoned area, which was initially created by Bank of America almost twenty years ago, they abandoned the project but I digress, they are heavily funded by the city and seeking more money from the city, I’ll give you a hint...... reed and Lucas are involved.... where did you think all that money for 18th and vine was going?

18th and forest too.

AOC invited her folks to Earth.


Let's hope the space aliens will like our Bar-B-Q.