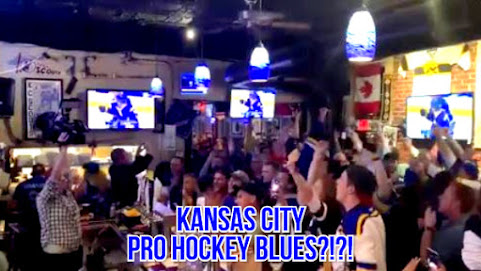 Apropos for #TBT, the KCMO hockey fans celebrating last night should've stopped by the graveyard where some of the most loyal supporters of former Mayor Kay Barnes most are buried, dug them up and asked them about the pro-hockey team promised for the $300-MILLION Sprint Center. Instead, cowtown hockey chumps partied at a local bar under the false pretense that KC has any love for STL.


Get it straight, Kansas City will always dislike the town on the wrong side of the Show-Me State and any "celebration" is simply to make lives of quiet desperation just a bit more entertaining with an appearance on TV broadcast news.

Nevertheless, here's a quick glimpse at headlines from the moderately big game just in case some lost fanboy stumbles upon this post.

KANSAS CITY, Mo. - Kansas City's was on full display Wednesday as crowds of fans gathered inside the Blue Line in River Market for Game 7 of the Stanley Cup Final. Patrons packed the bar and others sat on chairs outside for the winner-take-all battle. Brock Schults is from St.

ST. LOUIS - At 9:41 p.m. Wednesday, "Gloria" played to a packed Enterprise Center as thousands cried, danced and hugged complete strangers. The St. Louis Blues were more than 1,100 miles away in Boston, but the moment they won the Stanley Cup for the first time, it felt like they were home.

ST. LOUIS (KMOV.com) -- It's all real. It actually happened. The Blues just won the Cup. With a win over the Bruins Wednesday night, St. Louis captured its first Stanley Cup title in franchise history. Blues hockey, a tradition dating back to 1967, just delivered a moment only thought possible in the dizziest daydreams of its supporters.

The Blues frickin' did it. After sloppily face-planting in a Game 6 clinch opportunity at home, the St. Louis Blues bounced back and won Game 7 in enemy territory on Wednesday night by a score of 4-1. In doing so, captain Alex Pietrangelo hoisted his franchise's first-ever Stanley Cup since the Blues were established all the way back in 1967.


Hochman: Blues' Stanley Cup is for Plager and Hull, Charles Glenn and Laila, fans and families

This is for you. This is for St. Louis, the city whose team won the Stanley Cup, a sentence that seemed unfathomable as 2019 began - and now, 2019 will be forever remembered as the year of the first championship. This is for, of course, the players and coaches and executives and everyone who contributed to this year's Blues.


The Real Story Behind That Ozzy Osbourne Blues Jersey Mugshot

You never know when a night out will go from wild to legendary. But in Ozzy Osbourne's case, one crazy night in 1984 became infamous. Osbourne was in the middle of the years-long Bark at the Moon tour in May 1984 when a night of drinking in Memphis, Tennessee, led to one of the greatest mugshots of all time.

Hey!
KC has THE streetcar, dragon boat races, and million dollar arts festivals.
You can't have everything.
Oh, and 25million tourists every year.
A vibrant, diverse, and inclusive fantasyland on the plains.
And with lots more heavily subsidized and debt-financed momentum just around the corner.

"I'm open to the possibility of having a conversation, at a date yet to be determined, regarding the hypothetical potential of Kansas City acquiring a major league hockey franchise."

"There was a game? I must have been drunk."

I would’ve been able to afford going to hockey games if we had one but now that some idiot former kcps and now appraiser for Jackson county made my property tax go through the roof I can’t afford anything anymore. The blacks have ruined everything. This sounds more like revenge on whitey since the hood didnt get one penny added to their taxes. Sounds really really racist to me.

WHAT I POSTED LAST NIGHT IN THE POST ABOUT DANA AND PARKS:


I will beat Tony to this one using his language and attitude:

6:39 butt hurt much? You sound highly offended, don’t worry Dana, Chris will take care of you when you’re out of work...... forever.

^^says the pathetic little geezer who has nothing better to do.

I'm happy the blues won and I know nothing about hockey. Watched a few playoff games. If you're not moved by this amazing team (last to first, first championship ever) then you don't like sports at all and maybe you just don't like people in general.
-radish in