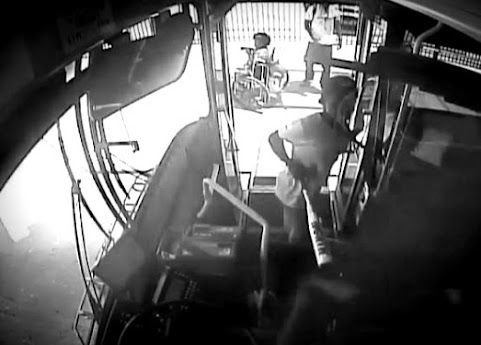 Quick peek at transit trouble for the late night and as the warmer weather makes the local commute even more treacherous.

"The moment a bus driver was fighting to protect herself from a passenger who was beating her with a baseball bat was caught on camera. The entire attack was captured by surveillance cameras inside the bus. We want to warn you that the video is disturbing."

And we take a brief pause here as we journey toward the GOTV weekend.

The bus can get rough but if you really look at it's much safer than other cities similar in size. An just think that there isn't much protection for riders. Whereas with the streetcar you've got police protection on nearly every train during the hours of operation. I wish we could make things more equal and get more protection for bus riders. Obviously things have the potential to get out of control.

Does nobody carry handguns so they can kill this Filth?

Why are blacks so damn violent and murderous? They get free everything and don’t have to work so what’s the problem with them now?

^^^ The same damn thing that kept all of sub=Saharan Africa at a level of Stone Age savagery, lack of evolution up from animal behavior.

Ah, witness the vibrancy of these enlightened people of color!

It’s currently illegal to carry on a bus or train in Missouri .

He got more hits than the Royalettes did last night.

Mud people. Will never evolve. Darwin would have classified them as a sub species.