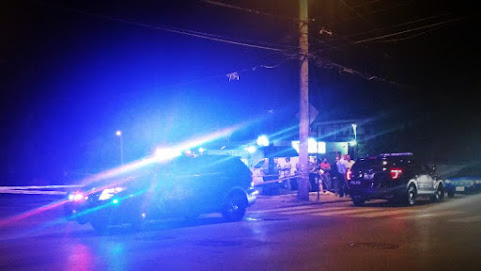 This was an exceptionally violent night for Kansas City with several gunfire instances reported throughout KCMO.

Here's the round-up and the lead photo is a TKC original taken on the way back to basement HQ:

A son shot his daddy in during a disturbance that occurred about 6:40 p.m. Monday in the 5900 block of Blue Hills Road. The victim is expected to survive.

Police were dispatched to the 2500 block of Kensington Avenue on a report of a separate shooting. A 21-year-old victim with a gunshot wound to the lower back was found in the yard. A report notes the victim is stable, silent and unwilling to cooperate with police.

Finally, Midtown Kansas City suffered another instance of deadly gunfire just one block away from the future path of the toy train streetcar extension down Main st.

The killing was right next to a local flop house that's one of the worst in KCMO and the source of constant trouble -- It's one of the many reasons the nearby Walgreen's is nearly unusable despite its convenience.

KCTV5: One person killed in shooting in Midtown

FOX4: One person killed in shooting in Midtown near 39th and Wyandotte

Glad that at least this is a big part of the discussion of who will be the next mayor and not just another local problem casually ignored by the people running for reelection.

Strange, I haven't heard Quinton Lucas or Jolie Justus mention much about it.

Pretty sure that was a joke, a$$hole. But I don't blame you for not hearing much from the candidates about it. This election is all about "housing" which is really just a trick to make poor people think they have influence over developer subsidy policy.

One more 135 murder year, probably more. Kc council doesn't care about murders because they're just hoping to bump up their resume.

Prediction should be 152, they won't let it go higher or it makes everyone look bad.

This wouldn’t have happened if we had bike lanes.

Baltimore has 128, but their hood rats aren’t clowns like ours

Blame sly, Frankie boy and petersucker, they don’t want to put the murderous blacks in prison, besides, petersucker is the worst at her job. She loves her big black cock.

^^^ Gramps is on his over to fill you up sonny.