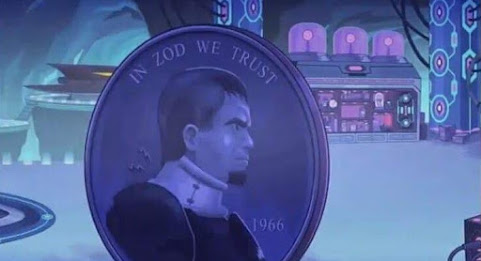 This morning we take a quick look at Kansas City's most prolific faith-based writer who explains this legal battle over currency, tradition and equity under the law as one important phrase could soon disappear from American currency.


In the grand scheme of things, very much like classic cartoons reworked, the proposed change might not be important but still offers a sign of the times as the nation steps further away from its roots and many believe the sordid topic of coin seems more important than traditional values.

Earlier this week the U.S. Supreme Court turned away a case in which the plaintiff wanted the government to get rid of "In God We Trust" on American currency. The case was brought by a man well known for fighting...

But then, silly posts like this one are the best you can expect from a small-time blogger who uses "faith" as flimsy camouflage for his lefty screeds

Bill would support a change to “ In Allah we Trust”. Allah sucks goat dick. All Muslims suck goat dick.

It's a nonsensical phrase that doesn't mean anything.

Why bother to remove it? Just ignore, it like so much noise.

It's a nonsensical phrase that doesn't mean anything.

That’s bLIEron to a tee right there, why do you hate god so much bLIEron? Are you mad at him because you wanted to be a woman and you got stuck in a dumb, blind ass old man body? Or that you ended up in a family that didn’t want you because youre a retard?

Yup that explains Byron for sure.


Byron has no idea what money is he never ever tried to earn any in his life. He has just crawled from one scam to the next.

It is only June 13 and Byron has spent his whole welfare check for the month. That means we will be seeing his retarded posts for 3 straight weeks.

"AMENDMENT I
Congress shall make no law respecting an establishment of religion, or prohibiting the free exercise thereof; or abridging the freedom of speech, or of the press; or the right of the people peaceably to assemble, and to petition the Government for a redress of grievances,"

Both the use of the phrase in question and the 1954 addition of the words "under God" to the adopted Pledge Of Allegiance are in violation of this Amendment to the Constitution.

Of course, in this Country, "The Law" means NOTHING except how it is applied and enforces by the Courts in any particular instance.

I agree that the phrase on our currency means nothing, just as "the full faith and credit of the United States" does, but there can be no question about the unconstitutionality.

@6:08, goats are a lot cleaner than the syphilitic homeless alcoholics you bring back to Mommy's Basement every night, perhaps you should consider switching to Islam.

I would consider switching to Islam but I just can’t bring myself to bomb innocent people like they do. Or suck goat dick like Muslims everywhere do.

Oh gosh! Was Timothy McVeigh a Muslim? The things you learn from KC's intellectuals. It's just amazing.

Billy loves to bash Catholics and Israel, but he bends over backwards to defend Muslims. Even though THEY KILLED HIS NEPHEW! Weird.