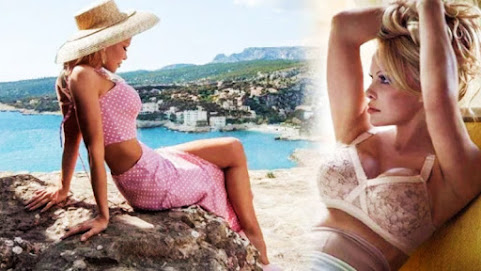 Our quick tribute to enduring hotness along with related pop culture news links . . .

Pamela Anderson wows in sexy swimsuit and stilettos at age 51

This woman lived on her own until 107; expert says care in community key to aging population

Closer to home, these news items dominate our reading into tonight . . .


Some Northland residents say creek washing out their backyards

Some residents in the Northland say a creek is washing out their backyards.On a dry day, Burlington Creek behind Northwest 60th Street can be beautiful, but not always. A rainy spring has contributed to the problem.

overland park ring doorbell Some Overland Park neighborhoods are on alert after reports of a man who appeared to be wearing a hazmat suit was seen ringing doorbells in the middle of the night. Ring video doorbells captured footage of a man dressed in white with his face covered, wearing a backpack.

KANSAS CITY, Mo. -- Artists and work crews Thursday began erecting a new sculpture at the redeveloped Linwood Shopping Center to celebrate the anniversary of the city's urban renewal project. The public display has special significance for those on the east side.

MISSION, KS (KCTV) - Rock Creek is a stream that's frustrated people in Mission for years. As more and more water flows through Rock Creek, it's eroded away at some of the surrounding homes and parking lots. Now, hope might be in sight for those living near the water.


Stranger Things' Star David Harbour Visits KC For the First Time and We've Got The Scoop! - In Kansas City

When we sat down to kibitz with Netflix's Stranger Things star David Harbour, he had officially been in town less than ten hours. He hadn't even had a chance to pig out-well, not yet anyway. "I got in at two this morning," says Harbour. "I want to eat barbecue.

Thunderstorms are expected early Friday morning, which could produce damaging winds, damaging hail and heavy rain. Friday will be hot and humid, with a high ne...

How about a bucket of gasoline above the patio to surprise Mr. Hazmat?
Then throw couple of lit Black Cats at him.

He will find a new hobby, toot sweet.

I’m offended that’s the white people paying for the blacks to exist is not included in the statue (which by the way will be destroyed and sold for scrap by the same people it supposedly represents) since when do we pay the one percent for art to a project like this?

White people are not paying blacks to exist. Get over, yourself.

Where did you go to school, retard?

The Klan got a deal on hazmat suits....allows them to parade incognito.