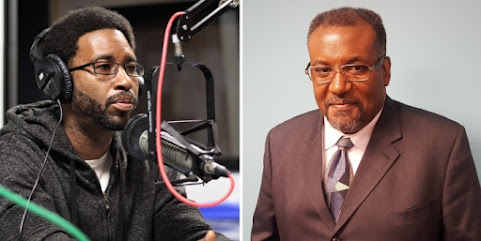 A news report from this weekend covers familiar ground for longtime denizens of the local political scene on the topic of a State Rep. and a goofy old photo . . .

Most of the back story does a decent job explaining the sitch that dates back to an attempt at a hip-hop career. Fact is, Brandon Ellington was a pretty good rapper but he's a better elected official.

Rev. Wallace Hartsfield II is a prominent member of the clergy and represents the legacy of an exceptionally powerful East Side family.

Missouri State Rep. Brandon Ellington is an avowed progressive who has spoken in front of thousands in support of Bernie Sanders and rose to statewide prominence during the Ferguson, Missouri riots where he attempted to mediate and bring peace.

Full disclosure, this blog has always believed that Mr. Ellington is one of the most promising and forthright elected officials in Kansas City. He has tirelessly supported his district while remaining independent from both Freedom, Inc. and/or social justice warriors. Example: During the gun rights debate in Jeff City he exercised his open carry rights as a demonstration of CCW complexity but also spoke of the danger that illegal gun owners represent to the urban core. Without a doubt, Mr. Ellington is a thoughtful, young elected Representative and he has found fans on both sides of the aisle.

But here's where things get interesting . . .

VIA SOCIAL MEDIA WE NOTICE MANY 3RD DISTRICT FAITH COMMUNITY DENIZENS PLAYING DIRTY POLITICS AND GOSSIPING IN SUPPORT OF THE REV!!!

The story about the old photo recirculated online is just one example out of many with many more allegations that are mostly catty and haven't gained traction outside of Sunday bake sales . . .

Of course, all is fair in love and politics but the hypocrisy of these "church folk" is notable as the election comes down to the wire.

Rep. Ellington held the lead in the primary and seems to be campaigning a lot harder than his opponent via online tech and community outreach beyond his bubble.

Still . . . Supporters of the Rev. Hartsfield haven't answered criticism of their gossipy tactics and don't see to be tech savvy enough to realize that most social media channels aren't "private" at all and members from their own ranks have been just a bit disturbed by the malicious politicking of these so called people of faith.

Not that shocking that church folk can be disgusting. Just look at the Catholics. Sorry, T.

If the fat fake rev gets elected no money will be spent anywhere outside of the hood, it will all go to an area of 25 blocks around his church. Just wait, you’ll see. This fat fake rev won’t be able to separate church from government either, he’ll only vote based on his and his alone religious beliefs. I guarantee it.

If it doesn’t put money in his pocket it won’t happen.

The at large race will have an impact on all of kC. Another tough choice, a bernie bro or one of the revs. I know clay wants us to vote but the choices are tough for people who actually want to know whats' going on in KCMO.

Damn good post @9:20! No more Revs. The way they behaved in the MLK Blvd situation was unethical and wrong. They have betrayed all of Kansas City and do not deserve to hold office.

9:18 the Catholics get a bad rap when every other religion is just as bad, especially the mooselimbs. Why don’t we hear about them as an example? All the Baptist, Episcopalians, Presbyterians and the rest hide their rapes and child molestations. If we could only get billy Tammy to dig into their failures instead of just one. Just sayin.

We want to sell them $Millions worth of military weaponry!

We ignore the facts and claim to be pro-Israel while we make deals with the sponsor of the vast majority of Islamic Terrorist Organizations in the World.

Saudi Arabia killed 3,000 Americans on 9-11, but we still do business with (and Stable Geniuses still borrow money from) them.

Insulting Muslims may soon be tweet-pronounced as "Treason"!

Shame. Like the mayoral race, lesser of two evils. Progressive (pronounced "Libtard") idiotic Bernie policy supporter, whose ideas would bankrupt this country like they have KC

Hood Poetry II? Man I bet that was a hell of an album. Did he go platinum?

Don't like either choice but I'll be damned if I go with a Rev. who will just give more kc cash to the King family.

"Saudi Arabia killed 3,000 Americans on 9-11...." This will be valued information to our national security establishment. Please forward your proof of Saudi Arabian government's involvement in the attacks ASAP! Oh, and let us know too. Otherwise it will seem like you're just blowing smoke out your ass.

Everyone knows that Mossad was behind 911 in order to bring the US military into the Middle East. ISIS was the largest Army ever created by Mossad to be a buffer between Israel and Iran.

Took about 2 seconds for this discussion to go from a city council race to “the mossad was behind 9/11”. Gotta love internet discourse.

P.S. not a kcmo voter but radish hopes Ellington wins. He’s a serious candidate. He’s a substance over symbolism guy. Those gun pics are silly for his opponent to use. How many redneck cracker candidates have hunting rifle pics?? Plenty. And recall greitens had a machine gun Dbag ad too. Pics are stale too. Ten years old.

^^^ You have your tin foil hat on right?

Tony, make sure and have your blue dress dry cleaned after your last interaction with Brandon Ellington. Man crush much?

The fat fake rev is also responsible for the $11,000,000 dollars for the grocery store that’s one block east of his church, suspicious? You bet.

What is menacing is the conglomerate known as the Revs... their perspective is always about money and wielding power, despite claims that they "help" people and a super-dwindling congregation. These Revs should cease their rhetoric... they are nothing but glorified prostitutes and pimps. One is kicking people out of homes they have owned for decades just so he can build a private community center and this one is seeking public office so he can his personal beliefs and ideals that the masses are turning from. He thinks God is going to give him this council...may God have mercy on his misguided soul... or not.

If Brandon's crazy ass mother wasn't involved with everything he does he would have more respect. But that chick is nuts.

Brandon did a good job in the house, he should run for a Missouri senator position. I feel that the Rev. Hartzfeld knows our community much better.