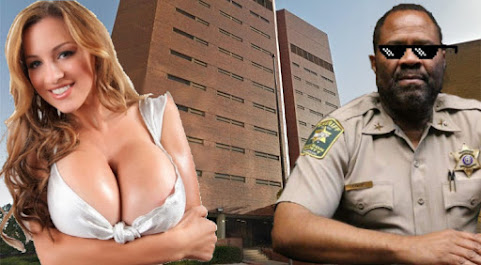 A cadre of lady lawyers pushed for change after a protest and spillover into a stacked Jackson County public meeting today.

However, and this deserve mention because our blog community of insiders noticed this one but nobody else did . . .

WHILST LADY LAWYERS COMPLAIN ABOUT BRAS, A POLICE OFFICER ATTACKED AT THE JACKSON COUNTY JAIL THIS MONTH HAS ALREADY BEEN FORGOTTEN!!!

Sure, it's not as "sexy" as lady professional potentially going bra-less in court but some dude nearly choking out a police officer during an escape attempt might also merit public conversation -- So far there has been very little transparency about security protocols that also confront tough questions amid an ongoing and dangerous human rights crisis at the jail. 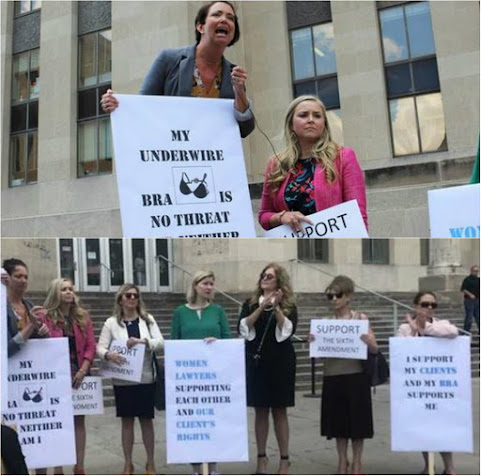 Here's the aftermath of the great bra debate the media squeeze that led to an upcoming date that may or not include dinner and movie . . .

After Sheriff Darryl Forte sent a string of messages on Twitter, insisting he was standing his ground to keep jail employees, inmates and visitors safe. But the new protests and a special legislative meeting may now spark change.

"This policy is discriminatory against women and infringes on our clients' Constitutional access to counsel," attorney Tracy Spradlin said.

The attorneys have wanted a meeting with Forte and jail director Diana Turner. But when that didn't happen, they took to the streets to make their concerns heard -- loud and clear . . .

The Jackson County Legislature wanted to hear those concerns on the record. Attorneys, the sheriff and jail director all spoke to a packed public meeting Wednesday.

After the display the Sheriff agreed to the meeting with the the county human rights commission acting as mediators.

Looks like the Sheriff has the situation firmly in hand.

Watch put for that sneaky Forte' he might just be setting another booby trap.

What about women with three breasts?

Sheriff Forte goes undercover at the Shady Lady and asks, "If I ask you to remove your bra, would you hold it against me???"

Forte and his merry band of black rapist

These women are hysterical. They don't need to be taking up all of the county's time with this non issue. There are alternatives to underwire bras. We all shouldn't have to bow to their fashion choices.

I wonder how her Honor the Mayor of Independence feels about this. It's a cinch Dolly Parton would never get in.

The sheriff's office also runs security at the courthouse. Forte isn't trying this crap over there. So is that place secure?

^^^^^ Different standards, not an apples to apples comparison.

Forte isn't showing much regard to these complaints, for an elected official he seems very confident that voters will forget his behavior while in office.

Those women are very mad. Maybe taking their bras off is the right move. They might not be the right size. Definately need to loosen up.

Just another Jackson County special interest. These women lawyers are actually just looking to drum up business and seem tough to clients. It's a promotional show at the County's expense. Good thing the Chief is standing up to them!

I support the Chief and I support the deputies and guards. They are doing good work that nobody else will do.

Jesus Christ just look at the rage on that broad's face!

Talk about getting one's panties all in a bunch!

Hey, a couple of those lady lawyers aren't bad looking! I'd do them!

The picture looks like a bunch of used up, street tough, whores.

How do all the sub lawyers get in with their chastity cages on ?

Protesters would be better off if the media focus was on the special session of the county Legislators. Forte acted like an idiot and so did his corrections director.

^^^ At one point he actually said, "Sue me." Tough talk when it's the taxpayers who'll be paying the legal bills.

I find most of these "all of a sudden" problems perplexing.

The solution is simple.

SHOW US YOUR TITS.