Stacey Johnson-Cosby is trailing in the polls, fundraising and name recognition in her 6th District At-Large council race.

More than any other council candidate in this otherwise BORING-ASS election cycle . . . She has been AGGRESSIVE IN CRITICISM OF HER OPPONENT. Even better and because this is TKC: Stacey Johnson-Cosby has effectively used political comics to take on Andrea Bough and mock the wife of federal judge . . . Thereby risking a trip to Guantanamo Bay -- Sorry, that joke never gets old for me.

Is it identity politics? Yes.

Does the negativity rub many voters the wrong way??? Absolutely.

Is it effective??? Maybe. In terms of social media shares and likes . . . Stacey Johnson-Cosby is drawing much more attention than MOST of the other forgettable council contenders.

Here's a glimpse at the comic for those who haven't seen it yet. 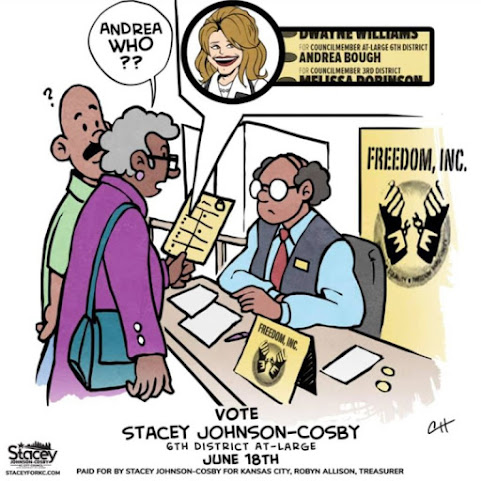 More to the point, call it progress that AMID THIS NEVER-ENDING SILLY SEASON an elite African-American political leader can openly mock and call out the "barbie doll" look of her also elite competitor proving that election struggles often employ petty, culture war and racial identity rhetoric whilst the ruling class fight over money and power.

negative campaigning rarely works in kc. That's just not the way to do it.

I guess beauty is in the eye of the beholder.

Stacey is hurting herself with these childish cartoons. Why did Freedom Inc. endorse Bough and not Stacey? Maybe because Bough is the better candidate? Smarter, more dedicated, not mean-spirited and not reliant on childish cartoons? The cartoons detract from the issues, and say a lot (negative) about Stacey.

Freedom has always made it's endorsements on how much money you can give them. No secret, just the way they do business.


The candle went out a long time ago on either of these two being Barbie dolls. Just more dead weight the taxpayers don't need trying to spend their tax dollars in a wasteful manner

Do not like these tactics. They should debate on the issues, not looks.

Stacey has nothing but her skin color to campaign on, so what do you expect?

Andrea's husband Steve Bough openly lied and double crossed Freedom Incorporated when he said he wouldn't run for chairman against Terry Riley. Freedom Inc should be ashamed at themselves for picking a white candidate whose husband blatantly disrespected the African American community and now Freedom turns their backs on a woman of color but as 7:09AM said, "Freedom has always made its endorsements on how much money you can give them. No secret, just the way they do business." Very sad.

Stacey has been putting her yard signs on rights of way all over the place and a few were on Metcalf, um, in Kansas. Really ?

She is putting Andrea is "white face" interesting strategy. This might work in an in-district race in the 3rd or 5th but is a tough sell city wide. It's not exactly progressive. Kinda mean.

It's all about "no good" Freedom, Inc.

How about a cartoon of her cuck liberal husband. He sucks worse than his stupid wife.

Now if the white woman called her something similar that would be racist right?

^^^ calling her “Barbie doll” is code for cracker in the hood