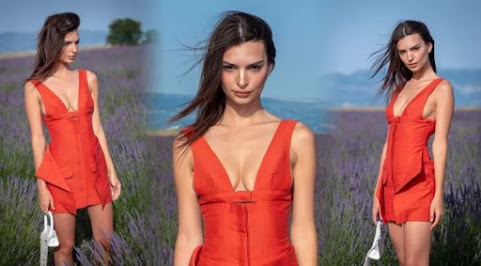 Normally, she's a bit more revealing her social media shares but this hottie still looks good in a more conservative wardrobe choice as she inspires a bit of pop culture consideration:

BBC: How Women's Workwear Has Evolved

GRANDVIEW, Mo. - Cities across Missouri are preparing regulations for medical cannabis dispensaries before the state approves the facilities. In Grandview, city leaders will meet at 7 p.m. Tuesday to review the first draft of a proposal regulating the businesses. Thursday, leaders in Kansas City will host a second meeting on drafted regulations.

OLATHE, KS (KCTV) -- A kitten that was stuck inside a drain in an Olathe family's window well with no way out, was rescued by two plumbers and an IT consultant. A camera system that is sent down below to help solve all sorts of plumbing problems can also save a life, five feet to be exact.

The crispy chicken thigh entree at Tannin Wine Bar & Kitchen. Two Kansas City restaurants have joined some of the most famous restaurants in the country on a prestigious list - the Top 100 Wine Restaurants as named by Wine Enthusiast Magazine.

KANSAS CITY -- It connects Kansas and Missouri, and now a developer is dreaming up a tall order for the Kaw River Bridge. The plans focus on a railroad bridge that is more than 100 years old. Mike Zeller hopes to breathe new life into the area by creating something that's never been done before now.

Entering Monday night, the Royals found themselves firmly placed in the basement of the American League Central. Sitting 24 games back of .500, their road woes and inept bullpen have resulted in a poor first half for the most part. However, for the Cleveland Indians, the winning record is far from indication of how 2019 has progressed for them.

KANSAS CITY, Mo. - The owner of a Marlborough East property at the center of a neighborhood dispute appeared in municipal court Monday. Between property and probation violations, John Michael Oyer currently has 45 ongoing cases with the city. He was arrested last month after failing to appear in court several times.

Hide Transcript Show Transcript NICK: MISSION ACCOMPLISHED. I DO NOT WANT TO TALK ABOUT MORE STORMS. RACHEL: ONE MORE ROUND. NICK: ONE MORE TONIGHT IN THE WE GET ALONG GREAT FOR THE WEEK. THERE IS A SLIGHT CHANCE THURSDAY MORNING. IT IS A LOW CHANCE. TONIGHT'S CHANCES IS THE HIGHEST CHANCE OF THUNDERSTORMS THE WEEK.


How ya miss this news bloke?

Go out and enjoy some frosty vibrant world class donuts.

^^we will because we go out. You on the other hand, will never leave your shitty trailer in Frogville. Thanks for the advice..it's beautiful out! Not that you would EVAR know.

And be sure to enjoy Shake Shack on The Vibrant Plaz'

^^why are you always on here? Why don't you have anything else to do?

Can someone let the Royals know that writing about how badly a team that beat them played is not the way to boost themselves?

Talking to yourself again I see.