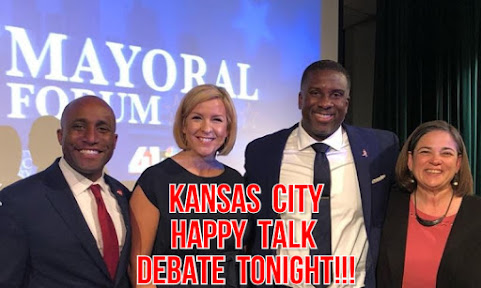 As we slouch toward the anti-climax of the 2019 Kansas City mayoral election the only thing that's certain is a nearly universal disdain for the litany of forums that didn't really answer any of the more serious questions posed by voters but instead served as a promotional tool for local legacy media.


KC mayor candidates share their hopes for the city

KANSAS CITY, Mo. - The two candidates, Jolie Justus and Quinton Lucas, vying to be the next mayor of Kansas City, Missouri, took to the stage Wednesday night for one last public forum.

Quinton Lucas and Jolie Justus, both sitting members of the City Council, faced off in the fourth mayoral debate hosted by The Star on May 30 at Ruskin High School. syang@kcstar.com Less than a week out from a highly competitive election for Kansas City's next mayor, one candidate still has significant sums of money to burn.

Jolie Justus has built her mayoral campaign around pragmatism and the idea that Kansas City needs a mayor to focus on issues like affordable housing and crime - and focus on growing the city's profile on the national stage. And, as it turns out, she's also pretty darn good at throwing axes.

Quinton Lucas has tried to position himself as the progressive candidate for Kansas City, Missouri mayor, taking bold stances on tax incentives and criminal justice reform. To get a better look at Lucas on a more personal level, KCUR's Lisa Rodriguez went to Ward Parkway Lanes with the mayoral hopeful to talk about spending time in Hutchinson, Kansas, his (rusty) Spanish and more.

KANSAS CITY, Mo. - The Kansas City mayoral race is heading into the final stretch between Councilman Quinton Lucas and Councilwoman Jolie Justus. There are several issues that matter to Kansas City voters, and 41 Action News narrowed them down to five: public safety, roads, housing, the Troost Avenue divide and development.

The debates were somewhat useful. But to an extent I agree. It was mostly about the reporters posing for their own cameras. Everybody wanted to do station promotion. I notice the community newspapers were left out and that's unfortunate, a lot of people still get their news that way.

Jolie is the underdog. I think that works to her advantage. She functions best on a personal level and has a lot more REAL friends in Kansas City than Quinton. We haven't given up on her yet!

Quinton won but that's overstated. Look at Jolie, she hasn't ever won a real election in her life. She has always snuck in and didn't really compete for the job.

The debates are useful not because of what they say but because of what they don't say. There was some talk about the airport but that disappeared quickly when it was pointed out that Quinton basically voted along with Jolie Justus. He made a few overtures otherwise but went along with the crowd with the Edgemoor deal. The conversation about affordable housing gets a lot of attention but not as much as stuff that KC residents really care about like more police on the streets and taxes.

If you listen closely, you can hear that BOTH candidates plan to raise taxes when they take office.

Blues won the Stanley Cup tonight. Can we ask when Kansas City will finally get the professional NHL hockey team we were promised???

Of course Quinton won, Jolie is a worker and not a performer. Which one would you want for mayor? Seems like the last guy was a circus act, too.

@12:39, you must be talking about a different Jolie Justice than the one I've had the misfortune to have as my Fourth District City Council Representative!

The one I have hasn't done shit for her District, and if you do manage to corner her long enough to ask a question, the stupid shit doesn't even know that she has ANY constituents (only 20%) north of the River.

The only times she's been found north are the one "Dog and Pony Show" Edgemoor put on pre-KCI and a recent meeting with the ridiculous farce of "Northland Neighborhoods Inc."!

Skip the box when voting. Don't vote for either.

Q: Hey Holmes, when it's time to pay Du bill, who picks up the check?

A: Quinton says, "I was born to a single mother, and we were homeless at times, so I shouldn't pay."