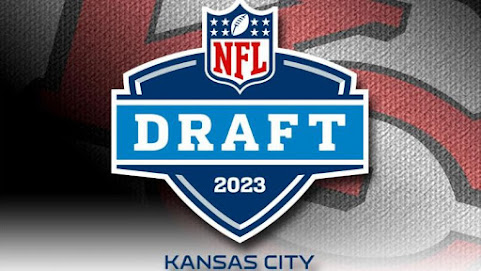 A recent announcement about the NFL auction of college dudes created a great deal of hype but not a lot of concern about the COSTS Kansas City taxpayers will incur as a result of the vaguely homoerotic festival of big money footballers.

While there's no doubt the draft should bring a great deal of attention to Kansas City. The better journalists in Nashville reveal the hidden price tag of the NFL draft is in the MILLIONS.

Some of the complaints about the hype regarding the event:

They don’t tally up all the costs, including government, business and entertainment closures; traffic congestion; and expenditures on police and security.

They skip over how much spending — especially on hotels — ends up in the pockets of distant corporations.

Newspaper: Chiefs president on landing NFL Draft in KC: Lamar Hunt is ‘looking down and smiling’

Huge get! DT Baseball Next!

Got a job lined up to serve big gulps for this!

Slie had planned on using the pre-K tax to help fund this boondoggle.

In any major city this wouldn't even be news.

Are the 800,000 that came out for the Royals parade coming to this event too? I wasn't aware that it was even that big a deal. No more so than Game Day going to Columbia.

The hotels and chain restaurants, all with out-of-town ownership, will all do fine.
And the local swells and hangers-on, including KCMO and Jackson County politicos, will do their best to cash in and take as much credit as possible for something they really had nothing to do with.
The NFL and the television networks will of course bring all their own people, so the notion that all these jobs will be created is just the usual baloney.
And regular folks in the metro will be lucky to even get to actually see much of anything and instead will be treated to yet another opportunity to purchase grossly overpriced beer and snacks.
The real question remains: Just how much taxpayer money has been committed to "support" this event.
Given that the locals are "negotiating" with the NFL, it's a good bet that the politicians left the meetings wearing nothing but their socks and big smiles.
It never changes.

This is so cool!

Of course it would be more cool to have working infrastructure, functional school districts, and not to be #5 in murders. But what the hell, bread and circuses for all!

This is good for kc a city without much typically going on. Nashville already has plenty so their hotels would be full regardless.

Wouldn't it be wonderful if the city actually GOT that kind of money?
There should be some kind of accountability for pure blarney.

They shouldn't base anything on Nashville. Nashville has a lot more entertainment and interesting things to do than K.C.

I'll bet the NFL is requiring KC to be #1 in homicides and #1 In child and spousal abuse by NFL football players by 2022 to get this deal. Well on our way!

Tony seyz- stay in your mom's basement, don't ever move out & start a blog!!! Shame on people who want to do something with their lives and make money! Also, Tony Botello seyz- FUCK YOU KANSAS CITY!!!

Don't be fooled by the shiny object in the story. Yes, this definitely is a great get in terms of P.R. and visibility to the city. But these large sums of money that the city and NFL keep floating around is fools gold. City coffers will see very little of that. So when all the politicos say, "$200M of economic impact...." if city coffers get more than 100k to 200k of that when it's all said and done I'd be shocked. And what little the city does profit will likely have to go towards prep for the event and clean-up after it's gone.

The way this is good for the city, and it's very significant, is the fact that the NFL Draft is the most popular non-sporting event in the world. And it'll shine the light on KC for the better part of a week and culminate in a heavily viewed, national event. That's where the "profit" is. The dollars that the politicos and NFL are throwing around is fool's gold and the city will see very little of that when it's all said and done.