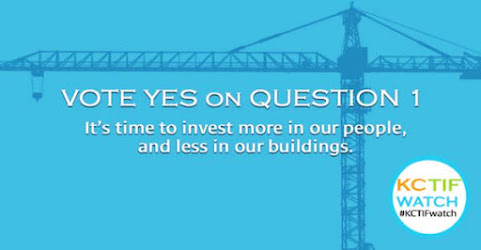 Insiders and developers are afraid this effort will kill tax breaks for local construction projects.

Neighborhood advocates Question 1 could put Kansas City back on track to funding neighborhoods and affordable housing rather than luxury living space.

Meanwhile, people who really know how 12th & Oak works realize that an "ordinance with an accelerated effective date" is just one of many way to circumvent and nullify well-meaning but ultimately clueless citizen initiative petition.

And so we offer a glimpse at the latest campaign e-mail blast and a quickie movie on the topic. Take a peek:

KC TIF WATCH: What we can do next to help public schools.

When City Hall tried to give Shirley Helzberg a $4 million dollar TIF, you were on the front lines with us advocating for our public schools, public libraries and our mental health fund. You got us this far and now we're ready to take the next steps.

The Coalition for Kansas City Economic Development Reform has been working since 2015 to create equity in Kansas City, specifically by trying to educate the public about the overuse of economic development incentives and their long-term devastating impact on our most vulnerable citizens.

Since that time, we have watched, year after year, the city of Kansas City and the entities that were created for the purpose of incentivizing development including the Tax Increment Financing (TIF) Commission, the Land Clearance for Redevelopment Authority (LCRA), the Planned Industrial Expansion Authority (PIEA) and the Port Authority give 100% property tax abatements for luxury development in the downtown area.

We have watched as these projects have continued to be approved regardless of the obvious lack of blight, apparent lack of oversight and review and pressure from voters. We have worked, year after year, trying to attend meetings, write letters and even driven to Jefferson City to petition our law makers for some level of control.

All of this to stop the constant hemorrhaging of our public dollars to private luxury development.

After all of this, we are finally in a place to call in the troops! Our ballot initiative to cap incentives at 50% (instead of 75% that it is currently) and to make all of the economic development authorities follow this cap, will be on the ballot on June 18, 2019.
We still need your help!
Developers and their lawyers are already using deceptive push-polls to make people think we are funded by out-of-town billionaires and the corporate chicken-littles are already telling voters that the sky is falling and Kansas City will no longer be developed without these incentives.

We have created an informative video to explain what Question 1 is and what it will do for our public services. Please watch and share it with as many voters as possible.

Of course the site across from the Kauffman Center is blighted. See all the weeds in that grass field? It absolutely deserves millions of dollars in city backed incentives to help an out of town billionaire build a hotel there. Never mind the fact that we have bad infrastructure, poor schools, high taxes on the poor, and such. We need to keep throwing money at downtown because that's where the real people are.

Now that we're done with the sarcasm, let's get down to the nitty gritty. Jolie Hustle-Us, Quinton Puke-Us and all their cronies are against them because it'll hurt their relationships with their rich masters (private developers). Studies have shown tax incentives to private development does not help the community. In fact, it's quite the opposite and is a drain on the community. S'lie will have you thinking that the land that the development would be built on wouldn't be generating tax revenue if the developer didn't build on it. I'd say it still doesn't help the community if the money generated on the property isn't going to the people like our taxes are.

Speaking of, where is my city backed funds to build my new house?

I'm not anti-development. I don't think anyone is. It's the method by which these developments come about that is the problem. What sense does it make to continuously give people like JE Dunn, Loews, Cordish, etc all these millions of dollars in tax breaks to help them be even more profitable when we have children who cannot get a proper education, bad infrastructure and people who can barely make ends meet financially due to being over taxed? We've been more than generous incentivizing these vultures. Time for them to start paying their fair share like the rest of us do. But that'll never happen because our local government is bought and paid for by corporations. It's New-Aged Slavery. So yes, absolutely vote yes on Question 1 and let's put a dent in the madness.


Only a racist would use a phrase like "New-Aged Slavery".

^^^ Byron, only a racist would see racism everywhere he looks.
Stop hating on all White Folks, they're the ones who died to free your ancestors.

I will vote YES on Question 1.

@Byron Funkhouser....I think it's really cute that you can find racism even in the most darkest corners....so you think.

Even cuter is your issue with "S'lie" seeing as how the term is used by many in various outlets in reference to our "great" Mayor.

You don't even know what you know you don't know. Don't worry about what that means. It'll make more sense in a week or two.

Byron is just mad at everyone because he ran out of money last week and his monthly welfare check that he mooches off us taxpayers won’t arrive until next week.

Has anyone heard a good reason NOT to vote for this?

Funny how a Hotel was built downtown without TIF and all the others need money from the city to build . Years back they said TIF would stop because of all the improvements. But the greed keeps going .

@1:14 PM - Nope, other than the scare tactics used by the anti-question 1 crowd that it'll supposedly halt development (which is complete and utter bullshit).

@1:18 PM - And therein lies the problem. TIF isn't being used for it's intended purpose. Maybe to some degree it was in the beginning but even that was a stretch. It's certainly, without a doubt, now being abused to the Nth degree. And the parts of the city that could actually use TIF and incentives aren't getting it.

The city has poor fiscal policy. Why are we having to continue to spend millions from the general fund to finance garages for Cordish? The Cordish deal was rotten from jump. And we have Queen Kay to thank for that. Yeah, we have a shiny entertainment district downtown. But it's going to cost us millions upon millions upon millions of dollars for years to come. Think of all the roads we could fix with that money, teachers would couple pay, pension we could pay, etc....

Whenever you want to determine what to do for a given ballot measure, look at who's for and against it and evaluate their motives. What do the people supporting Question 1 have to gain? Better fiscal policy? More money for basic services? Sounds like a fair and valid reason to me. What do the anti-question people have to gain for Question 1 failing? More carte blanche to throw more millions at developers? Perhaps some kickbacks from said developers for given them millions to finance their private projects? Which is the more just reason? Sounds to me like passing Question 1 is the right move. Developers have run ragged over this town for too long and the gravy train has to end and we need to get back to basics. No one is against development. If Hilton wants to come in here and build a hotel on top of Barney Allis Plaza, great. They can finance it themselves. Hilton has a bigger budget than the city if KC does and can afford paying for it themselves. We cannot afford to keep propping up private development. So I'm supporting Question 1. Besides, wasn't our shiny new street car supposed to be the final thing needed to spur development downtown?

However the vote comes out won't make a bit of difference, as usual.
Whoever becomes mayor and the clowncil members will bow to the will of the usual "developers" and their connected insider attorneys and, if the TIF statutes need to be "expanded" to meet their requirements, those changes will be made at either the local or state level.
Just like the abuse of the CID statutes that "allows" hotels to use that "tool" or the TDD statute that enabled THE streetcar.
Money seeks its own level and if you think any of the KCMO electeds have the guts to stand in the way, you haven't been paying attention for about the last twenty years.
For KCMO residents/taxpayers, if you don't see the mark at the table, it's YOU.
It never changes.

I still say if we have to give away the farm just to get somebody to build something here then what’s that tell everybody about killa shitty?