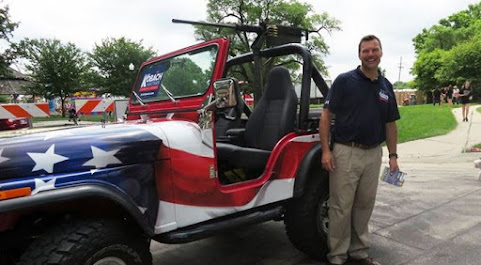 After pushing a tough guy image and bringing a toy gun to a local suburban neighborhood parade, Mighty Kris Kobach suffered an embarrassing defeat to a moderate Kansas granny. Then, very recently, the national media blasted his list of leaked jobs demands that included access to a private jet.

Now, with his back literally against a wall, Kris Kobach makes a bold last stand in what is the culmination of a career spent touting tougher immigration rules.

KRIS KOBACH HELPS TO MAKE THE BORDER WALL GREAT AGAIN WITH MONEY FROM THE INTERNETS!!!

A roundup of news on the Kansas crusader now helping to beg for cash on the Internets like many bloggers.

Daily Caller: We Build The Wall, a privately-funded campaign that aims to build a wall between the U.S. and Mexico, broke ground over Memorial Day weekend.

To be fair, the group can build faster than the government but that's not saying much. Also, the wall is very tiny.

"The new wall is an 18-foot bollard barrier that stretches ABOUT A MILE LONG near the Texas-New Mexico border. The project costs about $6 million to $8 million. It is the first-ever privately funded wall built on the southern border, which is planned to be sold to the U.S. government for $1."

Now, this project has had its share of problems and recent outcry about the building delay preceded this construction boom.

However, such an ambition endeavor is bound to hit a few roadblocks.

And so, here's Kris Kobach talking up his new construction project about half a year after he was universally rejected by voters throughout Johnson County.

Kkkobach is a xenophobic racist that sucks Steve Bannons and Steven millers dicks.

So you are pro child trafficking... good to know.

The ugly underbelly of capitalism comes through the ports of entry with the rest of the commerce & not across the open desert.

If it costs %6 million to build a mile of "The Wall", why is our Beloved Leader insisting that he needs $10.85 million a mile?

Using the math that "We Build The Wall" has proven, the $1.72 billion Congress authorized in 2017 plus the $1.5 billion "Beloved" has told the Pentagon to divert from our Combat Troops should be enough to accomplish what he has been promising over and over and over and...

If "We Build The Wall" raised $20 million, and they spent $6 million to build this "almost a mile", why are thy saying they're broke and need more contributions to "keep going"?

Where's the other $14 million? Oh wait!
Bannon and Kobach were involved... never mind.

We get it, you were propagandized into it being a scam, because after 3 years of MSM lies, you keep taking the bait and never learn. Thats ok, I pray that eventually all the haters wake up to the lies you are being force fed.

Kristina, your TWS is showing.