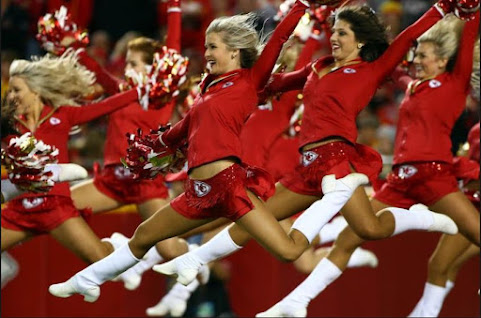 Because Kansas City has already given up on baseball season and current mayoral campaign has turned off most locals . . . Credit to the the Chiefs front office as they provide a nearly half-hour commercial for their fans who are desperately waiting for the new season that might or might not live up to a great deal of hype that has been underway since the last season-ending disappointment.

What local MSM won't tell the viewing public: Let's not forget that this documentary refocuses fans on football fantasies rather than the horrific allegations of child assault, domestic abuse and the growing wealth disparity betwixt billionaire owners, millionaire players and their broke-ass legion of acolytes.

Anybody who lives long enough realizes that vindication is overrated and it's really anticipation and "the tease" which lures in suckers throughout time immemorial. But I digress . . .

And so, the circle of life continues . . . Check the description:

"Go behind the scenes of the team in the first installment of "The Franchise". Head Coach Andy Reid recaps the 2018 season, we travel to Orlando with the Chiefs Pro Bowlers, go inside a film session with General Manager Brett Veach, and welcome in new additions to The Kingdom."

Shhhh. Nobody is allowed to mention Tyreek Hill's problems any longer. KCTV5 was told to STFU and everyone else has followed along.

It was a close one, but KC managed to cover the spread!!!

I've watched 5 minutes and so far no hot ass. For shame.

Chiefs will probably go to the playoffs. I think Andy reid needs to get a Chiefs Super Bowl I just don’t see them being stacked like last year.