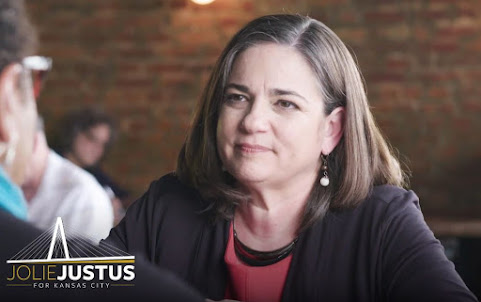 She's trailing in the polls as the election nears.

Insiders tell us she's just a bit more short-tempered and pressed for time as the election approaches and that's not necessarily a bad thing.

CHECK THE JOLIE JUSTUS AD BLITZ FOR KANSAS CITY MAYOR!!! AND THEN TELL US WHAT YOU THINK!!!

Overall, the pitch for "Kansas City's Neighborhood" mayor is what most people want to see and hear and the testimonials might be a bit cringe-y but still worth sharing in a campaign that's not trying to inspire but forge a connection among an electorate that is increasingly opting out of municipal politics.

Here's the word and then the clips:

Kansas City, MO - Today the Jolie Justus for Kansas City Mayor campaign unveiled its first ad of the general election which will begin airing on Monday on network and cable stations in the Kansas City media market.

The ad, titled “Ground Level,” features some of the Kansas City constituents with whom Councilwoman Justus has worked to tackle the everyday problems they face. The upbeat ad features scenery from across the city with residents talking about her accessibility, effectiveness, and focus on problems at the neighborhood level.

Justus holds weekly office hours for constituents, in addition to office hours in City Hall on Thursdays, to allow folks to meet with their city councilwoman in a less formal setting. Dating back to her Friday morning coffees with constituents when she was a Missouri state senator, Justus has always made it a priority to spend more time in communities than in an office.

Putting neighborhoods first has been at the core of the Justus campaign’s agenda. The campaign recently released its Neighborhoods First Agenda that details Justus’s plans for strengthening and supporting Kansas City neighborhoods. No one in the race has spent more time in all of Kansas City’s neighborhoods. Starting in January 2019, Justus walked the entire length of Kansas City, starting at 163rd and Prospect and finishing at 144th and Interurban road, north of the airport.
#################

First up is a friend of the blog -- A local who once had his own talk late night talk show and and is still very active around the metro . . .

No Latinos in her advertisements. But she represents that West side and Northeast where a large population of Latinos reside. Seems like a bit of an oversight for people who really know the 4th district. If she wanted to show neighborhoods, she should have started with her own.

I had to laugh.
The lady who said, "You can handle trash".

Cringe doesn't even begin to describe this one. It's a gut fest and Jolie's friends will be her undoing as a political candidate.

Jolie is talking to people in KC. Quinton's campaign is just about Quinton.

Where is the River Club ad? "I'll give you the Airport deal, just buy me a drink".

The only issue Jolie and Lucas have verbally supported is anti life which they spin as abortion.

If she is so proud of her work on the airport, why doesn't she ever mention it in her advertisements?

It looks like she's trying to be something that she's not. She had these bar meetings but they were mostly her supporters and staff. I don't see that as a real listening session or anything close to a neighborhood candidate. Most of her work was on the airport but I haven't seen her talk about it much. She was following Sly's agenda and I think most people are tired of that.

The rating for the advertisements: B-

Very mediocre and the same thing we've seen from most campaigns. Looks generic and doesn't speak to KC. Really wish Kander would not have dropped out.

She's not perfect but still better than Quinton Lucas. He seems very unfriendly to business and jobs and neighborhoods. He is the candidate who will increase property taxes the most.

Quinton Lucas will handle the public side of the job, and Caleb Clifford will use his expertise to set policy. The business community will have nothing to fear. There will be a Dream Team.

She may handle trash but she won't handle junk.

This "Neighborhood Mayor" business is total BULLSHIT!
One in five of her Fourth District residents are located north of the River, but we have never been able get her to attend any meetings north, including the one Mayoral Debate, which she blew off completely.

She is only interested in her own little circle of supporters, and simply cannot be trusted to have any concern for the City as a whole.

At least we have Councilwoman Shields in the 4th, and that is who should have run for mayor. She warned Jolie Justus about the River Club meeting but Jolie's lust for power and booze got the best of her.

Just more of the "amnesia" campaign.
Neither of these clowns seems able to remember how little they did during their tenures.
And they're clearly hoping that the voters don't either.
What a joke!

She is just another Demo-rat

Jolie is her own worst enemy. The ads are okay but she has a lot of work to do. This isn't going to cut it. She needs to say something more substantive. Maybe talk about her real plans and not just spew the company line.

Jolie is winning this race with a big margin. Think about it.

Don't really look forward to voting for either of them. They both strike me as arrogant and out of touch with most people living in KC neighborhoods. Hope somebody better replaces them.

She and Lucas are both the same. All being equal...vote against the fat one.

I'm sorry man, these are YIKES! Canned and boring.

This "Ground Floor" commercial is amateur level at best; all I learned is that Jolie is a terrible actress.

She just sits there nodding like some sort of broken bobble-head. Somehow she even manages to make that look contrived.

(it would be amusing to see a debate between a Lucas and Loie bobble-head . . . though I guess his would need a Bud Light in its paw).

An ethics complaint against Councilwoman Jolie Justus should have never been dismissed.

Also if she is elected you're going to have to look at that so called thing she is married to all the time. You all thought Gloria was bad, just you wait.

TO TELL THE TRUTH

5 short video clips, all of which stink, because they are clearly offering false praise, nodding in agreement, or feature a candidate who's held office for years claiming that she has new solutions.

NO JUSTUS IN KCMO

She's lazy.
She does't like to do difficult things.
She ignores large chunks of her constituency.
She has accomplished very little, just like her time in the MO Senate.
She can't even work well with her co-council member from the Fourth District, let alone guide the entire City Council.
She doesn't pay attention in meetings, preferring to spend time on her tablet and her phone.

The ads are sophomoric. They're embarrassing.

Lucas is no better, but he's not the topic.