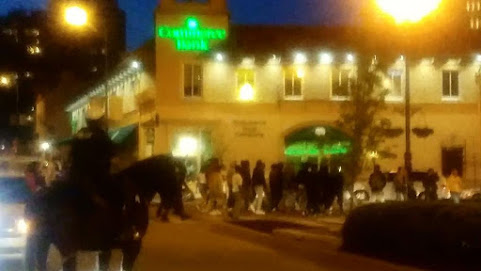 FIRST WORD comes form from denizens of our blog community on location . . .

WITNESSES DESCRIBE KANSAS CITY POLICE CRACKING DOWN ON YOUNGSTERS ON THE STREETS OF THE COUNTRY CLUB PLAZA!!!

"Just finished some delicious Chicka-Chicka Boom-Boom Enchiladas at Chuy's on the Country Club Plaza and as we walked back to the car we witnessed a KCPD Patrol Car come dangerously close to a half dozen teens across from Fogo de Chão."

From the images sent our way we can see see mounted patrol on the street and jockeying for position among throngs of teens walking through Plaza streets. 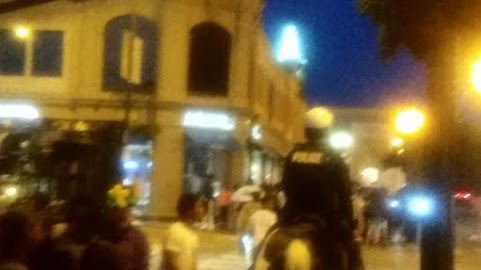 So far there's no word of violence but neighbors report a MASSIVE POLICE PRESENCE ON THE PLAZA SATURDAY NIGHT along with sirens blaring through the area well after midnight. 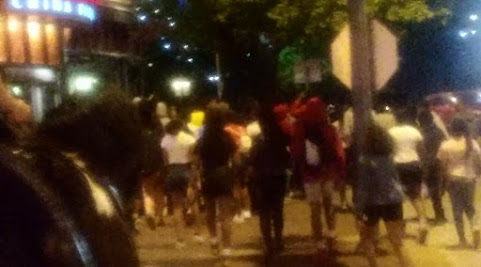 From some of these photos we witness youngsters blocking street traffic and mounted patrol attempting to corral the youngsters. Apparently, the dearth of Springtime pizza party activities might have sparked this outing . . . Or not. 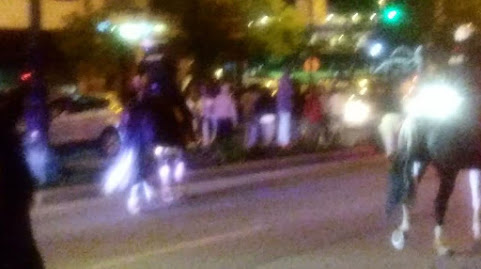 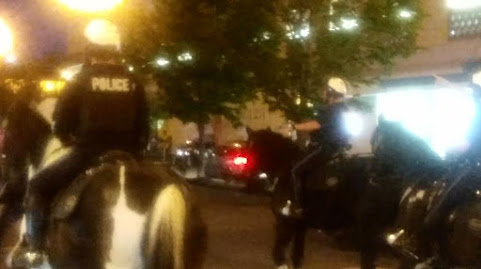 IS THE SEASON OF PLAZA TEEN TROUBLES GOING TO GET EVEN WORSE AMID ELECTION SEASON 2019?!?!

The problem continues. I can only hope the the coming of the curfew will help curtail some of this lawlessness. And maybe prevent unsupervised young people from destroying the last of the KCMO shopping districts.

THIS is why we need to keep the mounted patrol! Case in point.

Get a better photographer, but I get the point. Lots of unsupervised young people. What is good is that things didn't get out of control, even if it might have been chaotic at times. KC police getting the young people home safely is the most important aspect of last night's incidents.

Hope closing down the movie theater will help this.

8 years later and this is one of many problems that Sly's mayorship didn't solve. Every bit as bad as now as when he first came into office and had to duck in the bushes to save himself from teen gunfire.

The Po-Po need to dress up like ghosts.
The Boons are scared of ghosts. They will run back to Troost like a pack of striped-assed monkeys.

Never go to the Plaza too dangerous.

Mayor Sly is going to have another pizza night. Problem solved.


There are plenty of places to go eat and have a night out without going to the Plaza. The Plaza is a has been.
These kids don't have any parents and our city Gov. panders to them. They should be in juvenile homes. Thanks to people like Sly James and his wonderful son our city is way to dangerous, they even hang out in the link at Crown Center. Besides The Plaza is cheap and tacky now not what it use to be.

The plaza is a has been place.
Never go there anymore.
Too dangerous.

^^^ you left out the worst prosecutor and even worse human being, it’s name is petersucker.

Spending the weekend in Branson- yesterday in Silver Dollar City.
Thousands of young teens hanging out- going on rides and competing against other schools for orchestra and singing events.
Everyone was orderly with no fear of crime. Some kids spotted “Young Republican Club and Proud” T-shirt’s.
What an amazing difference between that and KC.
Everyone well behaved and respectful.

The koloreds think they can do whatever they want whenever they want regardless of all laws, thanks to bow tie the clown sLIE, shitty clowncil and petersucker, they can and will continue to do so. They ruin everything and it’s time to put an end to it and them.

Fine dining with the smell of tear gas and pepper spray.
With the background of teens screaming and shouting.
Life is good.


World Class Progress at it's finest.

Starting to look like Westport when it's descent into hell began.

there is concern about your cursing, i'm at church.

Good. I hope they are like New Orleans cops on horseback and ride in with Billy clubs thumping heads. I bet there were tons of well-behaved white prom kids down there last night. Only one race of people fucks up everything they touch.


We need to start the reparations process to all whose ancestors were slaves. That is the only way we are going to have equality and peace in our society.

Chief Sitting Sharice should go there and do some Jiu Jitsu on those crowds.

That would work.
Hire some Indians to ride them horses with tomahawks and spears showing.
Start lopping off that brown steel wool off a few of them and they'll get their asses back to Prospect where they belong.

^^^ They not like’m brown steel wool, too brittle, it falls apart when cut off! Hahahahaha!

At first glance I thought maybe they dropped off a few busloads of illegals on The Plaza for Sly James and his Motley Crew to process last night.

Schools out for the summer

"Hope closing down the movie theater will help this." Which theater is closing?

Why aren’t the fat fake revs teaching these kids how to behave in public?

They’re the ones causing all the problems to begin with, preaching hate for whitey and destruction of anything related to whitey is what they teach in black churches today.

Make the curfew all year long and ENFORCE IT !!!

One of the great wonders of Kansas City that sly James let evolve under his “leadership”. Bunch of black kids ruining the plaza like they do the zoo on free day or at worlds of fun. 10 years ago I used to look at living on the plaza. Can you imagine living there now? There is no way in hell I would.


The rest of you who know this is a problem are justified in your complaints, but geezer/diaper boy loser will try to pretend it’s nothing and the reason you don’t like what you see is because you are afraid to go out in public.

Anyone notice how Coprophilia boi chimed in right after the mention of who is actually responsible for all this mess killa shitty is in? Once the fat fake revs were called out for their hate speeches against whitey in church was mentioned he suddenly and grossly “woke”

I think he actually wants whitey eliminated once and for all.

Oh you mean the dummy who posted at 9:34? Yeah, complete beta male. Making fun of this situation like it’s make believe. Reminds me of the progressive queer male boyfriend types who buy former crackhouses east of troost to remodel it. Then go around telling everyone how hip they are for living in a retro area.


Realist: “People get gunned down on this street”

Progressive: “yeah but look at all the diversity and culture”! “They won’t rob me because I love everyone and life is fabulous!”

Condemn the Plaza via Eminent Domain.
Bulldoze it.
Build a stadium.
Problem solved.

I just paid near a million bucks for a view of The Plaza!

Proof the greater fool theory is alive and well.

The Playza is where it's at.

Anything white people build and enjoy the blacks throw temper tantrums, scream racism where none exists, protest and burn things down and then what evars left they turn the hoodrats loose to finish it off.

Killa shitty is just one of many democrim runs cities that proves just that.

Next time we go to war with a foreign country all we need to do is move our whole population of black people to that country and in no time they will destroy it and that country will be surrendering to us and begging that we take all the black people back.

It's a much cheaper version of warfare and would be extremely effective.

The plaza has gone to shit. Everyone knows what the problem is, but is too chicken shit to talk about it.


You think Quinton Lucas is going to do a damn thing about it? Hell no hes not. Jolie?

Give the cops polo horses and polo mallets

Hey! I’ve got an idea! Let’s spend this beautiful Sunday inside online talking about those darn kids! This will accomplish two things, first it will make us all feel better about being a bunch of scared little rabbits, and second it will help us all feel less lonely! Everybody else is out enjoying the beautiful weather, and we can while our day away on here, scared, lonely and bitter.

7:28 you are correct. It's starts with parenting. It seems IN urban areas There is so much anger .And the parents pass that along to the teens.

12:02 quinton is pushing the racist aganda, he’s aligned with the fat fake revs and their racist ways. Lucas has forgotten that white people payed their blood sweat and tears tax money so he could get everything free, schooling, jobs and probably got his ass out of a dui too. Hey Lucas, don’t bite the hand that feeds you...... do you really think the fat fake revs are gonna give you everything for free? Don’t count on it.


I guess to be fair Kansas City Missouri public schools are bad. Plus I can’t even imagine the brainwashing that goes on in each of those classrooms. Remember the Obama video of the kids stomping and chanting “alpha...omega” and shouting “because of Obama I am inspired to be the next this or that”.


Here is the thing. Obama wasn’t the first black president. He was the first biracial president. His white mom went off a whoring with a Kenyan. He’s not black. He’s white trash.

1:06---That's if she even knows who the daddy is. That's why Fathers Day is the most confusing day of the year in the 'hood.

Mike Obama got to be THE FIRST First Man! said...

1:06, and Hilly didn't get to be the first female POTUS, so, Billy didn't get to be THE FIRST First Man. Or, put another way...the former first lady's husband, a past POTUS, didn't get to return to the scene of his sexcapades where cigars as sex toys, and stains on a young intern's blue dress was part of the many reasons the Clinton Crime Cartel made 1600 Pennsylvania Ave known as THE WHITE TRASH HOUSE!

2:21---Like your idol Orange Jesus is some kind of saint?

The second photo shows a business that closed two years ago.

Somebody's feeding you a fucking line and you don't even bother to verify it?

Plaza management pr spin. You tried this with Westport fights too. There are a lot people in KC who don't want you to know the truth. The Plaza was a fudging mess. No denying it.

Holy shit you're right! These well behaved young people are all just waiting to hurry back to their scholarships and stable households!

2nd photo is grainy as fuck but it OBVIOUSLY shows the shape of the UNTUCKit logo. The store just opened. Get a grip PR hack. The plaza is a shithole and nobody believes your spin.

You guys feeling any better or are you all still scared? How about getting outside for awhile? All your fears and insecurities will still be here when you get back!

Good practice for the 2020 libtard riots after Trumps landslide victory.

Michelle is the first tranny in the White House!

Nothing but a bunch of worthless ghetto savages! The pitiful parents needs to be arrested for letting those names with no meaning, hair-hated, belligerent, foul-mouthed miscreants roam the streets unsupervised! On the other hand... dogs DO begat dogs!

This type of shit makes me fuckin' sick!

That's why I always carry on the plaza. Never know what is going to happen down there and I will not be a statistic. If they start something, they will regret it.