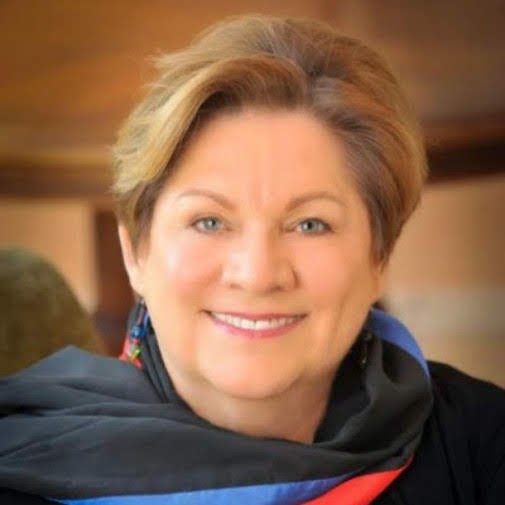 First a statement that we've declared told insiders and needs to be written down  . . .

KATHY SHIELDS IS THE REAL MAYOR OF KANSAS CITY!!!

She has more viable connections than anybody on the council, she's a part of at least three coalitions among the different factions on the council and her network of friends, supporters and donors extends all the way from this cowtown to the nation's capital.

And don't forget the time she beat the Feds regarding some weird mortgage deal and then danced outside of the courthouse afterwards.

Quinton Lucas pushes back against Jermaine Reed backing Jolie Justus with this nod from the strongest lady on the council.

"Endorsement Alert! I am thrilled to announce that Councilwoman Katheryn Shields, 4th District At-Large, has endorsed me for Mayor.

"I have represented Midtown for nearly three decades, and I am endorsing Quinton because I know he will preserve our historic neighborhoods, fix our streets and sidewalks, and build progress in every part of our city. Quinton Lucas has the energy, the focus and the determination that our City needs to embrace the future!” 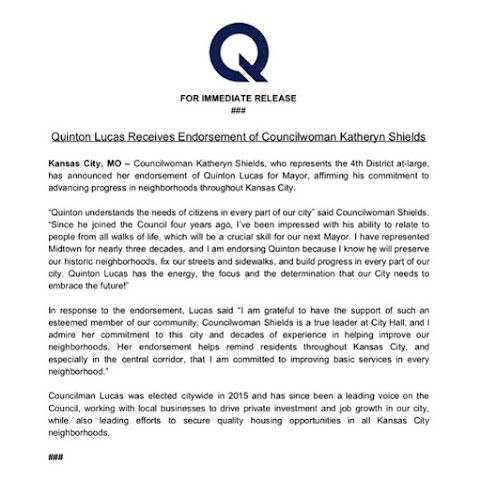 Yes, she does have a lot of influence but even in a "weak mayor" system, the Mayor has a stronger bully pulpit.

Jolie +5. And don't overlook her national support from the Human Rights Campaign which will give her just as many connection to D.C.

^^^^^^^^ Wrong. Quinton is ahead in the polls and he has more voting blocks supporting him. Jolie has Midtown but that's about it.

Who is the best write-in candidate?

Apparently, we're all supposed to forget that Shields and her husband were indicted on mortgage fraud charges when she was county executive.

Crooks liars and thieves are all we have left and they all endorse each other, (birds of a feather flock together) sadly there are no knights in shiny armour to save us anymore.

They win, we lose.

Dividing up the spoils and it's not even June yet.,
Dig deep, KCMO taxpayers.
Mama needs a new pair of shoes!
The laughingstock of the entire country.

Whoever is the next mayor is going to have to deal with mobs of antifa, feminazis, and unhinged progressives going crazy in the streets when trump wins the 2020 election.


There are now 23 people running for President for the Democrats and they are all clowns or weirdos. 23!

23 different opinions makes for a bunch of mad dummocucks, they couldn’t get on the same page if their life depended on it, itll be an end of the world event if they evar do. What an effing disaster.

SHIT for choices. Wish we could write in Clay.

Shields is the puppet master. Lucas is the puppet. Justus comes in a distant second. And this isn't the Kentucky Derby. Second place means you lose.

THIS HAS BEEN A DONE DEAL FOR SOME TIME NOW. QUINTON GETS ELECTED, FIRES TROY AND SHIELDS BECOMES CITY MANAGER. THEY DISEMBOWEL THE POLICE AND FIRE BUDGET TO FUND MORE MONEY TO FRU FRU PROJECTS...

Stop posting this 20-25 year old picture of Katheryn Shields. Start showing what she really looks like.