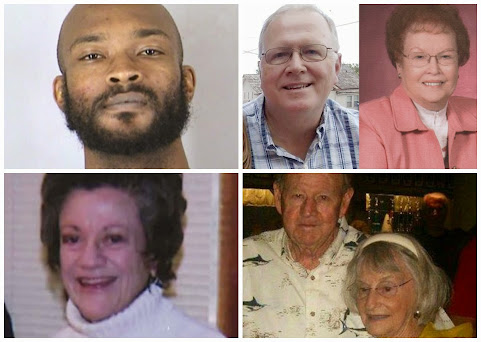 The convicted killer was found guilty by a jury of executing five innocent people in one of the worst rampages KCMO has seen in a generation.

Jackson County prosecutors promised to push for the death penalty.

Here's the word from the prosecutor's office attempting to highlight the lifelong ward of the state. Take a look:

According to court documents, Howell tried to steal a vintage Jaguar from the residence of Ann and George Taylor, severely beating the elderly county. They died later at the hospital. Howell allegedly shot and killed the Taylor's neighbors -- Lorene Hurst and her son, Darrel Hurst, and Susan Choucroun -- as Howell drove off in one of the Taylor's vehicles, a Toyota SUV. He was later arrested near Interstate 29 and Barry Road in the Northland.

At today's sentencing hearing, at least one representative of each victim's family told the judge of the irreparable loss that the famlies have suffered. "Nothing can take away our pain," said Kara Taylor, granddaughter of Ann and George Taylor.

Assistant Prosecuting Attorney Lauren Barrett asked the judge to run the sentences consecutively to ensure that the defendant never is released from prison. "There can be no chance .... that Brandon Howell is able to receive a parole hearing to be a free man in our community," she said.

Assistant Prosecuting Attorneys Jamie Hunt, Michael Hunt and Barrett prosecuted the case on behalf of the state of Missouri.
########

This is Kansas City. He'll be back on the streets in less than 10 years. Probably get his crime pardoned by the next President.

THIS is why our murder rate is so high.

Black privilege at work: even if you slay five innocent people, you won't get the death penalty because dat be rayciss n shee.

Racist murderer kills five WHITE PEOPLE and gets life...... if this was a white that even murdered one black he’d have gotten the death penalty, effing pussy judges.

I thought you were Pro-life.

I guess you just hate women, & are therefore, anti-choice, but you really don't believe in the sanctity of life, even though you make a show of being Catholic.


Five consecutive life sentences is not a disgraceful sentence.

What's disgraceful is your blood lust.

The only good thing about this is petersucker couldn’t give him parole, most worthless dumbass prosecutor evar.

This asshole should have been hung in public!

3 hots & a cot for life. Not a bad deal, better than he ever would have done on the outside.

5:02, Petersucker is just another misogynist sharing his hatred of women with us.

This piece of shit doesn't hide his hatred of blacks, either.

Poor pitiful bLIEron has spoken, you do know the difference between an unborn baby and a grown ass racist murdering black don’t you?

Doesn’t matter dipshit bLIEron If petersucker did her nobody would hate her but since she’s incapable she’s fair game, I don’t care who’s prosecutor, man or woman, if they suck at their job I’m calling them out and since when is pointing out facts about a racist black mass murderer racist? Only in your sick ass world it is, no one else’s, loser.

5:17 Byron lacks the mental capacity to explain anything, he is so filled with hate he is no doubt probably legally insane.

Perhaps we can get Arya to put him on her list.

Jean Petersucker Baker is the weakest prosecutor ever. At least he didn’t get probation.

You must kill more people than Timothy McVey, of Oklahoma City, to get a death penalty.

He killed them over an old 1981 Jaguar sedan that is worth nothing, those are lemons, hard to sell, worth maybe $1,200 if you can find a brave buyers that wants to tackle the lucas electrical system that shorts out daily. $1,200. A lawn tractor coast more.

We need to get rid of the liberal cocksucker judges along with Jean Petersucker Baker.

Wrong, retard. I don’t hate women. I have several that I fuck regularly. I do not care much for most blacks, though.
I don’t hate Jean Petersucker Baker. I just wish we had a good prosecutor instead of her. She is incompetent

Don’t know if Byron is insane. He is a retard for sure.

Who was the judge? They are all on the mayoral ballot June 18 to be voted on to retain or not. If we know the name we can vote the judge out.

Remember these names and when possible vote these liberal jerks out of office. How many times do you just check the box “yes” when asked on the ballot, “ shall .......be retained in office?” Do your homework, make your vote count, dang I wish Kansas City had a legitimate agency to oppose these travesties.

what happened to hate crimes?

This sucks. Not Justice, not right and something that in the end makes it more dangerous for everyone living in Kansas City. This was a serious case and I'm surprised to see that this dumb blog is the only place that talks about the death penalty option that was circumvented. Other media Outlets should do the same so at least criminals know that the public is watching and will hopefully convict and give the death penalty in other cases.

I guess none of you idiotic racist backwoods hicks can read....the families of the deceased met with the prosecutor YEARS AGO and agreed the death penalty should be removed as an option. Death is too good for this scum bag. Let him get butt raped and beaten till he dies in prison or offs himself. The families are OK with the sentencing so shut up!!

The judge and prosecutor should be absolutely ashamed. I don’t care what color the killer or victims are, anyone who kills multiple innocent people in cold blood does not deserve to live anywhere but hell. There are far better things to invest our tax dollars in than keeping this disgusting piece of trash alive for years to come. Hopefully he gets shanked in the pen.


Well the new thing is blacks and muslims don't pay for crimes like a withe person does. Maybe he will get wacked in prison. What goes around comes around look what happened to Jeffrey Dahamer. This guy is no different.

Oh yeah, Donnie Trump is really paying for his criminal history. But let me guess he does not count cause he is orange?
You are a moron.

Absolutely agree with @8:26. To He'll with this racial junk, ANYONE who kills 5 people like this should face the death penalty. Anything less endangers the law abiding citizens of KC.

He got the death penalty. Another 60 plus with the shit bags..... I would beg for a needle.

Brandon Howell also spoke during Thursday's sentencing, painting himself as the victim because he wasn't allowed to testify in his own defense.

8:22 be interesting to see if they still believe that after this scumbag made that statement in court. Kathy Hurst didn't have anything nice to say about this killing asshole. Fire ole smoky up again and start lighting these killers up again and make it very public so these gangsta wannabes can see where they are headed if they choose to kill someone.

Eye for an eye!

I agree with you. Mayor SLie has burned enough of our tax dollars. Don't burn more on killers like this. Too bad it's too late for the family to push the prosecutors to seek the death penalty. This guy definitely deserves it.

I notice the judges name was never mentioned. I will be voting NO on all the judges on the June ballot.

I know one of the victims’ family members quite well. They were consulted on whether to seek the death penalty and chose not to. This was not the call of the prosecutor, not the judge’s decision - it was the wishes of the loved ones of the victims.

If I trusted the system to do what it says it is going to do, I would be fine with Life Without Parole. We know from experience that even 5 life sentences does not mean this guy won't be released thanks to some judge, governor, parole board, or something else. I just don't trust our criminal justice system to deliver the justice that we and this criminal deserve. He will be "truly repentant" for what he did, come to Jesus, and become the most saintly prisoner in the system. Sociopaths usually do.

Obviously our lives if snuffed out, wont be worth a death penalty to the perp

And, Hilly Billy aren't paying for their long list of crimmie shit. So, let's just guess. They don't count because the are wiggers of the worst kind?

You are wayz tarred, so ask Hilly for some hot sauce she keeps in her purse.

“I believe that more people would be alive today if there were a death penalty.”
― Nancy Reagan

“You look at the crime and you look at the criminal. If it's a dope dealer who guns down an undercover narcotics officer, then he gets the gas. If it's a drifter who rapes a three-year-old girl, drowns her by holding her little head in a mudhole, then throws her body off a bridge, then you take his life and thank god he's gone. If it's an escaped convict who breaks into a farmhouse late at night and beats and tortures an elderly couple before burning them with their house, then you strap him in a chair, hook up a few wires, pray for his soul, and pull the switch. And if it's two dopeheads who gang-rape a ten-year-old girl and kick her with pointed-toe cowboy boots until her jaws break, then you happily, merrily, thankfully, gleefully lock them in a gas chamber and listen to them squeal. It's very simple. Their crimes were barbaric. Death is too good for them, much too good.”
― John Grisham

Lame Jean is weak on crime. This loser will be watching cable tv and eating candy in prison.

I notice the judges name was never mentioned. I will be voting NO on all the judges on the June ballot.

Hey 9:09..... Make it a habit on voting day never retain fat-cat judges. Always vote them all out. It helps to keep clean the gene pool of corrupt pieces of shit that were voted in last year.

Death would be too good for him.

Locked up for life is punishment.