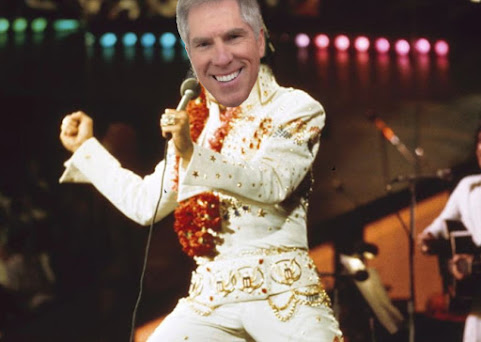 For background and context, here are just a few apropos fun facts for Sunday night from the world's most accurate encyclopedia . . .

"My Way" is a song popularized in 1969 by Frank Sinatra. Its lyrics were written by Paul Anka and set to the music of the French song "Comme d'habitude" co-composed and co-written (with Jacques Revaux), and performed in 1967 by Claude François. Anka's English lyrics are unrelated to the original French song. The song was a success for a variety of performers including Sinatra, Elvis Presley, and Sid Vicious.

Sinatra's version of "My Way" spent 75 weeks in the UK Top 40, a record which still stands.

Here's the press release word that threatens to upset the local system of mostly rigged politics . . .

Or, others could get in the mix. Short, easily spelled names of at least semi-known politicians will work best. Paging, council members Cindy Circo, Jim Glover or Scott Taylor?".

So the Star evidently concluded from city charter language, write-in general election precedent and perhaps the okay from City Hall that James could run as a write-in candidate in the general if worse came to worse and the only two names on the ballot were me and Vincent Lee ("the general"). No one at City Hall, nor the Kansas City Election Board (KCEB) nor any other establishment figure, said otherwise. But now that Clay Chastain, or perhaps others, want to run as write-in candidates in the up coming general, City Hall and the establishment say lo siento!

Ah, the old establishment double standard: You can only run as a write-in candidate in the general, if it works for them!

Now read this bully powers that be: I am going to run as a Mayoral Write-in Candidate in the general because it works for democracy! And, if the KCEB does not count my write-in votes they are in violation of state election law.

So, unlike Jolie and Quinton (who have not been specific on any issues, are uninspiring and are jointly responsible for many of the problems we now face), let me once again clarify for the voters my specific stance on the following controversial issues:

No to expansion of the streetcar south;
No to all future TIF tax giveaways (0%) to wealthy developers;
No to the earnings tax which clobbers the working poor and keeps our City in the economic doldrums;
No to anymore rigged, manipulated or misrepresented elections sponsored by City Hall;
No to changing the name of the Paseo unless approved by voters or the majority of residents living along the boulevard; and
No to anymore taxpayer funding for 18th & Vine or the like.

Yes to initiating an immediate, pragmatic and measurable plan to greatly reduce (and prevent) the horrific level of Kansas City homicides;

Yes to refocusing City Hall priorities away from glitzy projects and onto improving inner city neighborhoods, city streets, public transportation, infrastructure and growing our City in population and revenues;
Yes to re-examining the costly and less convenient and secure new airport ((and possibly an alternative plan ("ALT 30") for remodeling KCI)) and integrating into our new airport selection a new green (quick, quiet and clean) citywide transit system (to replace the ATA's failed $100 million a year diesel bus system) that includes connecting KCI to the northland, downtown and a regional multimodal transportation center at Union Station;
Yes to creating more affordable housing (via my innovative transit-driven approach) without raising people's taxes to subsidize it; and
Yes to examining whether it makes sense to shut down the City's stigmatized, failing and expensive public school system and replace it with a cost-effective charter and private school system: and most certainly...

Yes to flushing out secret insider dealings at City Hall, reducing its over reach and installing a new honest open government that works in behalf of the taxpaying public!

So Republican, Independents and sensible Democrats (all part of the 85% of voters who did not support either Jolie or Quinton in the primary) come one come all on June 18th to make history by writing in Clay Chastain for Mayor. Then you can wake up the next day and be excited about your City's future, "for once."

Finally, some good news around here.

This guy could fix the city. It will never happen though.

Can anyone explain why write-ins should be allowed in a general election, after the primary (with write-ins) narrowed the field to two?

If write-ins are allowed in both, what is the point of the primary?

Another KCMO election with:
Drama!
Intrigue!
Surprises!
Buffoonery!
Clown Shows!
Losers!
Which of these people who couldn't run a one-car garage gets access to $1.7 billion of YOUR money?
You really can't make this stuff up.
And the rest of the metro just sits back, pops another beer, and laughs.

Sounds good to me. A Minnie Me Trump.

Clay has the campaign platform that this city needs, but with additions:

Yes, ro firing the City Manager and all of his cronies who vviolate state, federal and municipal laws and regulations.
Yes to having an EXTERNAL forensic audit of all the City Departments and accounts, especially the Water Department.

The city will make sure there are not enough paper ballots for people to write on.

The only way Clay can win against the corruption that is endemic in Kansas City Politics, is if he could play by the same rules that Progressives do and receive an "Adversity Score".

Well, since I CANNOT vote for either of the 2 primary winners, I will indeed write-in Clay Chastain!

I was always gonna write clays name in, he does need to get out and pound the streets to get needed attention.

Anybody but Lucas or Justus


Write in a vote for Clay it's the only chance to save KC.

This isn't triggering my emotions for some reason.

So, I’m guessing TKC got drunk and banged some hot slut last night and is sleeping in.

6:11 here. There is actually... You don't have to vote. If you can explain that difference, have at it.

But you had that opportunity to vote for him in the primary by writing him in. Everyone did. And he did not finish in the top 2. He, like everyone else not named Justus or Lucas, lost.

He doesn't live here...why should he be the mayor?

Here's an idea the clay open up the door for anybody to be written in on a ballot how about Charlie wheeler former mayor. Or even Crosby Kemper the third would make a great mayor anybody but Julie Justice or Lucas who basically think alike act like I'm probably even take a shower together just kidding.

@11:48 - Sly James, Jolie Justus or Quinton Lucas don't actually live in Kansas City, so what difference does it make?

Clay has done some good e.g. the efforts for the bistate tax to save Union station but he's kind of embarrassing himself by not moving on. We've all done it before when we lose our minds going crazy for someone and just can't see it til years later and then we cringe when we think of our behavior