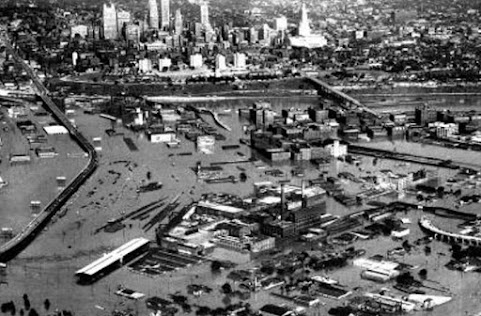 Let's start with an overhead shot of the GREAT FLOOD OF 51. Right now, we've bot a bevy of mostly bad news to share right now, as rain continues and locals pretend to work at their b.s. jobs

OVERLAND PARK, Kan. - Collecting double deposits for apartments, having no intention of ever returning them and failing to pay vendors: these are the guidelines multiple property managers said were routine business practices for the owners of some Kansas City metro apartment complexes. One of those complexes is the in Overland Park, Kansas.

Standing near the corner of his property in southeastern Reno County, Nick Egli looked east and pointed to the proposed locations for several 500-feet-tall wind turbines. Egli is standing on a grass airstrip he's spent the last 10 years building. He pictures a few more homes, some hangars and, eventually, a residential community for pilots of small planes.

KANSAS CITY, Mo. -- Kansas City Police are investigating after a 3-year-old died from a shooting. Investigators said the incident happened Friday night when the child got a hold of the weapon and unintentionally shot himself. Now, safety advocates are urging gun owners to lock up their firearms if there are children around.

OLATHE, KS (KCTV) - A local jury is now deciding the fate of a Shawnee Christian school leader accused of being wildly inappropriate with his students. Dennis Creason's trial has lasted more than a week and has been very emotional. Jurors heard from five families who claim their children were inappropriately touched a molested by Creason.

Mike Coughlin and Angela Laune, the father and sister of the late figure skater John Coughlin of Kansas City, are speaking out for the first time about the allegations made by SafeSport against him. John Coughlin took his own life in January.

John Coughlin was a pervert and took the chicken shit way out in life. He would have been a hell of a pass around toy in prison and he knew it. If Angela Laune's daughter had been the one sexually abused she be trying to organize a lynching party for John.

Plenty of people kill themselves over false allegations and figure skaters tend to be weird and dramatic in the first place. Would have liked for him to have stuck around to fight it since everyone is just going to pile on him since dead people can't defend themselves


She was in trauma therapy and didn't have access to the internet??? BS! She wanted to ruin his career and she did just that! This should have come out years ago. His life is over is that enough for her?

No. It will not be enough.
If he had one penny in his estate (doubtful), she will try to get it.

It always about the fucking dollars.

Uh, 10 people have accused him of this. That's a helluva conspiracy if you can pull it off.

He finally got around to recognizing March flood damage. Only 2 months late. I guess it's still better than the treatment Puerto Rico got. Except, Trump still hasn't signed an actual disaster relief funding bill.

The good news is there isn't much left save. Trump's taxes have already eliminated a good chuck of Missouri farmers. Bye-bye shithole rural communities.

3:23 do you have any idea what’s involved in just preparing a proposal from the state before it can be sent to Washington? Didn’t think so dummy, you just don’t call Washington and say hey, we got 13 counties that need money, can you send us some money? Don’t work like that, somebody actually has to prove everything they’re requesting money for and then somebody in Washington has to review and approve it. Don’t act like we are the only state asking for emergency money either, you can’t be that stupid can you?

The entire Missouri delegation sent a letter to Trump last month asking him politely get off his ass and approve this. I know he's got a full plate with all that cable news watching, tweeting, flying to MAGA rallies, and rounds of golf.

Obama's White House got approvals out within hours.

Trump separately also screwed disaster relief funding just before Easter weekend when he said a House bill had too much money for Puerto Rico and a fast track bill with national funding for Missouri, NE, CA, TX, FL and several other states was tabled.

A renegotiated bipartisan bill (with Sam Graves vote) was finally passed on May 10th. The Senate hasn't acted on it since Trump is still complaining about Puerto Rico and Graves has been force to admit he doesn't think Trump will sign it.

This group of clowns can't make the most basic functions of government work. They are a disgrace, and so are you for excusing and lying it.

When I think about these heroes I think about the Concert For Chad at the Arvest Midland Theatre where the entire pedo came out for their brethren who had to leave a church gig in Jefferson City because Chad was dating a 15 year old girl? In spite of what may have or probably did transpire to get Chad fired as a Youth Minister the jogging community came out in full force with song and praise of Chad the Pedo. The rest of us who detest pedo's will remember Chad who died liquefied in the porta shitter off I 35 a few days after his wife finally had the courage to move out.


SHE HAS HAD MENTAL PROBLEMS FOR YEARS AND NOW WANTS THE LIMELIGHT HAD NOTHING TO DO WITH john …. WAIT TILL SOMEONE DIES TO MAKE ACUSATIONS AGAINST THEM IS bullshit.