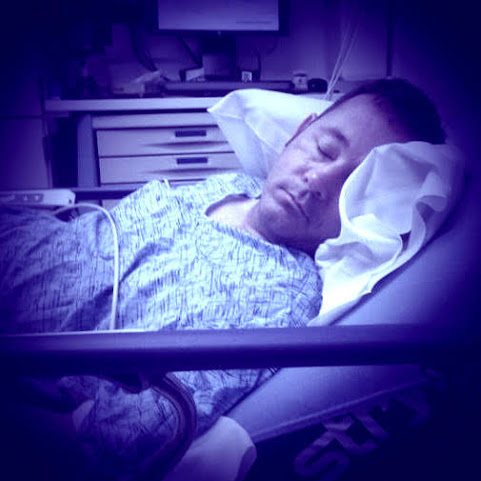 In the grand scheme of things, terrestrial radio overall is becoming a dinosaur among fading legacy media. Audiences are moving over to satellite and streaming services as the beloved form of local communication is now an extreme niche.

Recently, we discussed this trend and the implication.

We waited a beat and then got a very angry note from Scott Parks demanding apology. We advised him not to hold his breath waiting for it.

What I'm hoping is that it's all a ploy to get more attention in order to lift his saggy numbers. It's Saturday so I don't mind playing along.

I don't want to get into many specifics but among the denizens of radio it's very clear that Mr. Parks has a quick temper and on-air he has shown his angry side more than a few times.

AMID HOUSE CLEANING AT KMBZ, REPLACING SCOTT PARKS HAS BEEN RUMORED FOR QUITE SOME TIME AND HE DOESN'T HAVE ENOUGH FANS TO KEEP HIM ON AIR FOR LONG!!!

Again, we'll qualify this statement: In fairness, Mr. Parks has lasted longer than most local talkers but his recent lefty flip-flop angers longtime fans of BZ and generally the dude just isn't fun to listen to if only because he always seems kinda peeved . . . That might be fun for awhile but enduring the inner-conflict of a flyover country radio dude might be too much for peoplewho are mostly listening for traffic news, background noise at work or because all of their friends at the retirement home are dead.

As always, we wish Mr. Parks what Quakers call "peace at the center" as every dude must inevitably resign themselves to career change.

Don't get a swollen headh though, those contracts aren't worth the paper they're written on.

kc media is a tough game and it wouldn't be worth if if the pay was decent. Sad.

Trump Derangement Syndrome is the newspeak term for what used to be called Common Sense.

I listened to 98.1 a while back then bought a new car with satellite radio. So many options now. Scott Parks is such a Trump crybaby. What does he want? Some ol career politician like Jeb Bush? Maybe a candidate that drinks Guinness all the time?

Only in the delusional mind of Scott Parks does anyone think that Parks is still relevant on KC radio. Maybe Parks should run for Mayor, he'd fit right in on that freak show.

Washington Post Headline:
No Mueller, no McGahn and stalled investigations leave House Democrats frustrated.
So what is pissing of Parks and other media is the tables are turned.
Hillary is finally being investigated along with Obama operatives. Prison will be a given to many.
The media can’t believe the dossier and fusion Gps were lies. For two years the media pedaled lies and had only one goal- to get rid of Trump. And now it’s the Democrats who will be serving hard time instead.
And Scott Parks ... what say you? Boo hoo

Yeah... Parks is as pissed as a fly on a toilet seat.
He is as frustrated as a legless Ethiopian watching a donut roll down a hill.
He is as mad as a car load of queers getting pulled over for doing a 69 in a 65.
Like a tic on Dracula’.. he is mad.
And now he is scary like a porcupine in a balloon factory.
Parks should buy a drone and team up With Baloonzo Washington and solve some Democrat crimes!

Parks has to keep up the Trump Derangement or Dana won’t let him motorboat the fake fun bags anymore. I spared my ears from these two loons soon after Shannon retired.

Dana Wright is and always will be the worst on air personality that ever lived, she’s a big reason the show sucks. if Scott got rid of her maybe just maybe he could survive but he has to get over his anger issues that’s for sure. I liked him a long time ago but he changed and I tired of it and quit listening.

Is he rich yet after using the Online Trading Academy method? He says people approach him all the time and say they swear by it.....

I gave up on those two long ago. I used to listen when Mike Shannon was on there. But I can't take that Parks stupidity and Dana's laugh hurts my ears.

God, can you image being married to that? She's the kind of woman that could drive a man to drink.

Parks gets so many hate texts they don't even read the text line anymore. He is the worst.

Parks is a bigger bitch than Dana, and that says a lot.

Scott had been all for open borders, free healthcare for illegals, and abortion on demand, until he had to go to the ER and was told he'd be the last served because of his white privilege!!!

Let’s call in to the show Monday and troll scott

"We waited a beat and then got a very angry note from Scott Parks demanding apology."

No kidding, I feel like I am missing part of the story.

Your comments relating to the well known demise of terrestrial radio?

What is he pissed off about?

As his time on the radio comes to a close, I think his emotions are "a countenance more in sorrow than in anger".

I for one hope that his anger really is an act. That guy seems almost unhinged and yes I have read his tweets to President Trump and they are some of the silliest content I've ever seen online. What is he so angry about? A democratic election? I just can't see anybody being that mad about an agenda that half of the country voted to approve. I know that there is great division in this country, but people like parks often make things even worse bringing their personal animus to the table.

I quit listening to DANA and PARKS about four years ago when Parks went dumocrat. Now I sleep soundly at night. KMBZ can kiss my white privileged ass, and can start with PARKS.

Parks is a loon ... like the weird guy in the neighborhood that everyone tries to avoid. And Dana is the loudmouth everyone remembers from high school. Their show is a stale piece of toast that should have been cancelled before now.

Yes. Because other races never get angry, and women are always in control of their egos.

False. Trump Derangement Syndrome is the nonstop crybaby freakshow of the left, impotent rage at the outcome of a free and fair election.

Well, this is a good point. They're fixated on Trump, but their real rage is directed at the half of America that doesn't agree with them.

Parks is an idiot

Drunken socialist with a microphone

It's interesting that Dana and Parks make negative comments about people all the time but when TKC does a story about their show he blocks them. That's so hypocritical.

Narcissists, in this case Parks, will never admit guilt. They are fluent in lies, excuses and bullshit. They will deny everything, shift blame and then try to cover up with more lies. Never expect truth from a narcissist. They are pathologically incapable of truth especially if truth threatens their fantasy.

Basically, it's ok for Parks to say anything he wants but if anyone says something about his show he demands an apology. What a snowflake.
He obviously needs a safe space.

Dana and Parks is the lamest talk show over there. They spend too much time talking about themselves and their personal issues, BORING. I quit listening over a year ago. The other shows are liberal, smug, whiny 30 somethings with no earned life experiences to back their views other than they aren't living in their parents basements anymore and they can toilet by themselves.

Something happened around the time he split from girlfriend/fiancee formerly known ad JBJB. Never did hear what happened (I wouldn't expect to normally, not my biz, but their show was always about living real on the air). Prior to the breakup he was fun on Twitter and FB. He used to respond to listeners and fans, post funny content, etc. Now he ONLY posts outrageous Trump news bits asking for "Trumpeteers to defend". Not sure if Trump unhinged him or if he got unhinged and is single-mindedly focusing anger issues on Trump. He just doesn't sound like he's enjoying life right now. He has said in the past he struggled with depression. Maybe he needs a tuneup?

I remember Parks talked about getting a home with JBJB. And then a few days after he moved in. He never brought it up again. That's fine. But he talked about it on the air for months. Then all of a sudden nothing. Then a few months letter he starts saying some new hoe.

My guess is JBJB learned Parks was cheating with this new Hoe.

I confronted him on it via Twitter and like Tony he said, "Fuck You. Really" and blocked me. If Parks get fired it couldn't happen to a nicer guy.

8:09 pm You are on the money. The Corrupt Obama administration,players will be doing jail time for Treason. And Hillary was the one That made the Deal with the Ukraine. To influence the Election. ENJOY THE SHOW

Dang it. I farted and poop came out.

I had Obama PTSD and I got over it.

I just pooped myself

Dang it. I did it again.

If anyone needed more proof of the DUMBING DOWN of America, they need look no further than scotty parks.

Parks is a VERY angry man all he does is go off on twitter.

Parks suck and Dana doesn't ! I turned it off when Shannon left!

As far as Ex fiancee JBJB, they got a house together and then the next thing you know he's back in Roeland Park, the current GF Kelly who looks older than him in pictures, Supposedly was a set up from one of his friends. Just heard him talking now, (cuz I only wanted the keyword to cash) He supposedly has so much money that he's going to see his lawyer tomorrow, he wants to make sure his 2 kids and Kelly are taking care of when he dies...So maybe they got married, nothing in JOCO court pages to say that though.

Scott Parks has a job for life. Please don't confuse him with other former Kansas City talk show hacks out there.

I've worked with Scott for many years. Sure, he's comically, and makes me think about what Ted Knight would look like if he worked in radio for 60 years(Scott is 210 years old, but has aged well. Think a bottle of vinegar)

Sales are good. What real competition is out there in radio. Aww, wait please tell me you think the internet radio station with 5 listeners is going to rip money out of Entercom's hands? I'll hold my laughter until the gas rips through my pants so you may catch me downwind.