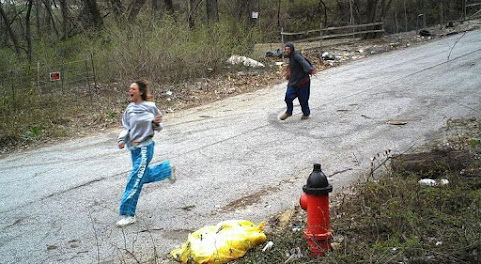 Based on total numbers without playing stat geek, a close look at the image proves that, sadly, white on white crime still dominates Kansas City.

There's a tendency to take pity on these somewhat lovable scamps without realizing they are people in crisis who won't take help from local shelters often because of horrific drug problems.

IS KANSAS CITY GETTING READY FOR A HOBO CRACKDOWN?!?!?

From bleaching their food to attempting to push them off city streets by way of legislation -- KCMO has a longstanding war against the homeless and this latest not so cleverly placed item should signal more anti-hobo ordinances coming soon amid the season of street begging ramping up.

The money line of this report was buried in the copy but it basically proves our point:

"Both the city and police believe the suspect in the picture lives in a homeless camp in the woods at the dumping site. They are working to identify him."

Welcome to life in KC that doesn't make the visitor's guide.

I guess this guy didn't get the memo about those great job numbers. Too bad. I'm sure some of that "affordable housing" that Jolie and Quinton are pushing will solve this problem.

White on white crime still dominates Kansas City? Show us the statistics. One incident does not make a trend.

Do your own homework. There are more white people and they commit most of the crime. Don't believe it. Please take a walk to meth town or the dog patch. Preferably late at night.

Meth is a hell of a drug

The KCFD will gladly hose them down and then lie and say they didn’t do it. The KCFD would rather sell them some guns if the are felons, but the bums don’t have any cash.

And why should we continue to dump millions into the Jazz District when just a couple of blocks south are some of the worst neighborhoods in KC?

Friends of Byron's no doubt.

^^They're probably your friends, since you live there, coward.

You're one of those stalkers who call me a stalker.

^^You’re one of those stalkers who calls me a stalker all the way from virginia right.

LOL, no lie Byron is a stalker.

There's a lot of scary urban woods in KC. Godspeed to those city employees and involved citizens trying to do something about this crisis of litter and dumping in this town. KC had a major major liter problem and the homeless undeniably are one of the prime sources.
-radish

If you are an illegal dumper you are a piece of shit. Anytime I’ve seen news articles or photos online of dumpers getting caught red handed in the metro they always drive a shitty truck and look like they haven’t showered in a month.

Sure, the 150 murders a year we have in this city and the cities all over America are all white killers.

Here in KC, where there is about a 45% close rate on murders, it is even higher and the easy extrapolation is that the rest of the killers are just as black as the ones they catch.

Trump is really cleaning up that American Carnage.

Remember - Sly, Jolie and Quinton all want to take your guns away. This is why CCW exists. These folks need to go. Get a one way bus or freight car and send them to San Francisco or LA.

They only want to take guns from dangerous people. If you don't beat your wife and kids, you should be OK. Oh, I see the problem...

Pan handling is a city ordinance, its illegal to panhandle in KC, yet there is a cardboard holder on every corner. Once you dont see that anymore, the city leaders and the cops might be FINALLY doing their job, but until then it will be the same dismal shithole called KCMO! Sometimes the overlooked little things can give you the pulse on whats truley going on!!

The hobos better watch themselves. If you recall, Scarlett O’Hara was attacked while driving her carriage through a homeless camp, and Ashley, Frank Kennedy and other local gentlemen burnt the shantytown down. KCMO would be wise to follow that lead.

But frankly Scarlett, I don't give a damn.

Why not corral them all up and put them in a forced labor camp? They could start by cleaning up all the dumping grounds around KC. 3 yr mandatory. At the end of their indenture, KC could offer them job/housing placement and a 10k payout. They'd be off the sauce by then, too. Win/win!

Seriously, that guy stole that purse and was like "WTF, there's nothing in this thing"

whatever happened to Melissa Coon and her son?

what news reports are true when you consider the melissa coon story?