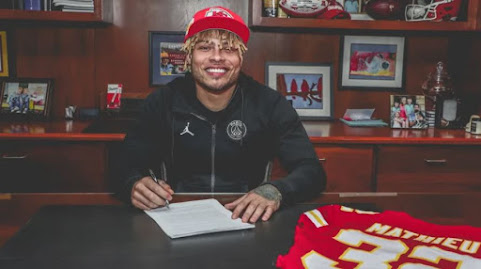 Actually, this video is before a recent trade when the local star played for The Arizona Cardinals. But it's worth a quick throwback look:

Kansas City, Mo. — Dozens of dogs die each year after being left inside cars on hot days, so Kansas City Chiefs safety Tyrann Mathieu sat inside a parked vehicle with the windows rolled up as the temperature inside soared to 120 degrees for a PETA video released ahead of National Heat Awareness Day (May 31). Sweating and gasping for air, Mathieu flees the vehicle after just eight minutes. But as the video points out, unlike most humans, dogs can't escape these oven-like conditions by themselves—and they can succumb to heatstroke in a matter of minutes, even on a mild day. "If you see a dog in a hot car, remember that every second counts," the video urges. "Dial 911 …. Do whatever it takes."

"I seriously couldn't imagine leaving my dog in a car like this," says Mathieu in the video as the heat starts to set in. "If you're going to make a dog a part of your family … [d]on't treat him like you wouldn't treat someone you cared about or someone you loved."

PETA—whose motto reads, in part, that "animals are not ours to abuse in any way"—urges anyone who sees a dog locked inside a hot car to call 911 immediately and stay with the vehicle until the owner or the authorities arrive. If neither respond in a timely manner and the animal's life looks to be in imminent danger, try to find witnesses and take other measures to free the distressed dog from the car.

That's actually a really good PETA campaign. It's not like he's wearing a meat dress or something.

Nobody gives a fuck!!

Keep the message out. Its sad people leave their dogs locked up in cars in the heat. Its still shocking that in 2019 moms are leaving their kids in the cars like that too.

Go, Tyrann! It can't be said enough: Hot cars kill. Never leave a dog (or any vulnerable being) in a parked car.

Thank you for helping raise awareness about this life-threatening issue, Tyrann! It is absolutely wrong, and deadly, to leave dogs in hot cars.

That "Do whatever it takes" slogan at the end, translates: If the cute k9 is baking in a nice burb setting, call 911 fast, then just stand by sweet talking the pup for a couple minutes. Officers with a lock jimmy are soon on scene. The owner is going to be getting a stern warning, and maybe a citation.

If the hound is getting cooked in the hood, call 911 fast, then wait on HOLD until dispatch gets around to answering. If the pooch is going all guard dog badass, best wait until that beast fatigues from all the barking, drooling, and biting at the glass before you even think about breaking a window. Park real close, stay in your car, break a window out, then bust a move! Or, may be best to let the popos decide....if they show up in time.

This is a very important demonstration of what an animal in a hot, locked car experiences. Thank you, PETA, for bringing this to attention! Never leave animals in locked cars, please!

Good for him! I don't even cheer for the Chiefs, but I'll cheer for him now!

I like this guy for doing this. Also at least he isn't beating up women and kids.

Anyone who knows you said...