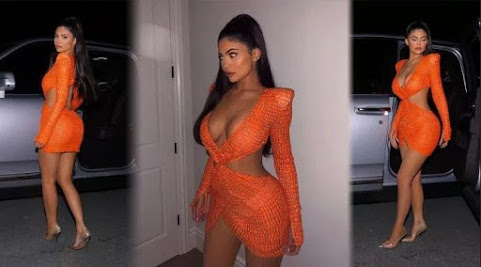 Hottie Kylie inspires this quick update on all things pop culture and worth a peek:

PI: Instagram and self-harm: 1 in 3 youth who see cutting images try it themselves, study suggests

Closer to home, here are more than a few news links worth a look right now . . .

You've seen his work from Southwest Trafficway to downtown. The spray painted mural art has made Kansas City unique and is sort of a love letter to the city. Meet

FAIRWAY, KS (KCTV) - Severe weather coverage pre-empted parts of CBS prime time programming Tuesday. The 7 p.m. and 8 p.m. encore episodes of NCIS were pre-empted. Since they were repeat episodes, KCTV5 will not re-air them. They will be available on CBS.com. The 9 p.m. episode of Blood & Treasure aired as scheduled.

Flamingo 492, as the bird is known to the Sedgwick County Zoo of Wichita, Kansas, is flaunting its freedom. According to The Wichita Eagle , the crafty flamingo escaped from the zoo with another flamingo in June 2005. Flamingo 492, who had recently arrived at the zoo, was able to fly away thanks to "strong storm winds" and "not-yet-trimmed flight feathers."

Demonstrating that the follies of youth aren't the exclusive domain of humans, a young bear spotted earlier today bounding around Eureka, Missouri, now appears to be trapped in a Catholic middle school, and, like many a youngster before him, is probably having a real bad time.

Hide Transcript Show Transcript ABOUT THE REASONS WHY. >> NUMBERS ARE VERY IMPORTANT TO LISA TAYLOR, ESPECIALLY SINCE SHE HAS REQUESTED AN AUDIT OF THE SCHOOL SYSTEM. >> WE'RE QUESTIONING WHAT IS GOING ON AS FAR AS THE FINANCES. >> SHE IS CONCERNED SINCE THE DEFICIT OF $1 MILLION THIS YEAR.

Kansas City Actors Theatre brings together an ensemble of gifted stage veterans for its thoughtful production of Paul Osborn's gentle 1939 comedy "Morning's at Seven." And the results are what you might expect: detailed character work, great timing and a level of commitment that actually elevates the material.

We've seen some pretty bad first pitches over the years. Some that don't even make the plate, some that go sailing well over the plate, and some that just made us laugh (we're looking at you, 50 Cent).

Stay away from the batters box and on deck circle.

Royals need to stay away from the field.

They should have her find the keys to the batters box.

Kylie Jenner is as big a freak as her dad is. But then she is as big a whore as her mother is. Almost as fucked up a family as the Funkhousers.


These people are just starving for attention. This poor girl looks like she is wearing colored bandage gauze. But I guess people like geezer hater can look at her and cream his jeans for free.

Bitch showed zero concern at all for the guy she just drilled with the ball.
Went right into ME ME ME selfie mode.
Goddamned whore.

^^easy fatty, you're misogyny is showing itself again. Look, it's YOUR fault you're fat, bald, ugly as shit and can't fuck. You have only yourself to blame for your virginity. Nobody wants to fuck an asshole baby. Do better!