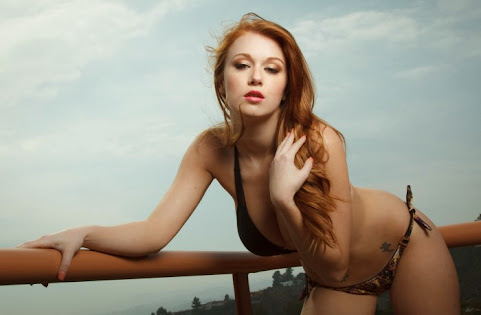 Hottie Leanna is one of the most important online bikini influences and her social media winning inspires a glimpse into the swimsuit fashion game now played by corporations. Checkit:

Closer to home, here are more than a few news items that have captured our attention:

KANSAS CITY, Mo. - The city of Kansas City, Missouri, is planning to hop on the scooter craze. The city's pilot project would feature a scooter and e-bike program. A formal announcement is planned for Thursday afternoon, but details started to trickle out Wednesday.

Local Designs To Save Paris???

Beyond its status as the biggest in Kansas City, the impact of Dimensional Innovations' new $2.2 million 3-D printer could reach globally - as the homegrown company considers ways it could help rebuild the historic spire atop the Notre Dame Cathedral, said Nate Borozinski.

On Wednesday, Sports Illustrated MMQB columnist Andrew Brandt hosted sports agent Erik Burkhardt on his The Business of Sports podcast. They spent most of the hour-long program talking about Burkhardt's client Kyler Murray, who was selected by the Arizona Cardinals with the first overall pick of the NFL draft two weeks ago.

KANSAS CITY, Mo. - About one in 10 of us deal with some sort of substance abuse. For those who have asked for help, the path to recovery is full of roadblocks, setbacks and heartbreak. Despite the hurdles, a human with hope remains.

Former Chiefs great Derrick Johnson has signed a one-day contract to retire in red and gold.Johnson, who spent 13 years as a linebacker with the Kansas City Chiefs, will now officially retire as a Chief. Johnson left Kansas City as the franchise's all-time leading tackler, compiling 1,262 career stops (993 solo) in his 13 seasons with the Chiefs (2005-17).


How will the Sinclair purchase of Fox Sports Kansas City affect the Royals?

Fox Sports Kansas City (FSKC) was created in 2008 to replace the ill-fated Royals Sports Television Network. For the last decade they have broadcast Royals games, showing both 100-loss seasons and the championship season of 2015.

"Mentoring should be transformational," says Henry Wash, "like a metamorphosis." It certainly has been for Wash, who runs the nonprofit High Aspirations, a mentorship program that focuses on African American males between 8 and 18 years of age. Wash has benefitted from two of Kansas City's most generous mentors, who passed down lessons he still uses in his work.

KCMO is on the way to becoming a mini Seattle. One foot in the grave.

Homeless people staggering around everywhere, a frustrated police force quitting in droves because they have their hands tied... a total embarrassment to visitors and tourists...

Only area where we already got them beat is in the homicide rate.

The KCMO scooter endeavor will end up the same way as the failed KCMO bicycle endeavor.

@3:06PM Have you EVEN been to Seattle bruh?!? Bitch please. Wrong on every count. Judging from your post, you've never left Frogville. Loser.

The city of Kansas City MO needs to stick to dealing with running the city which so far they are greatly failing at doing so. There are some real entrepreneurs out there that really know what they are doing, so leave the starting and running of businesses to them.