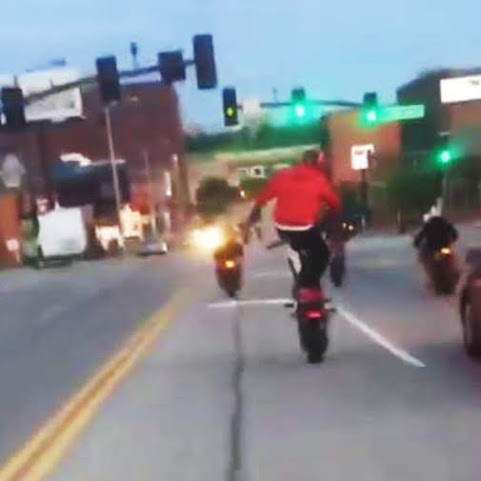 Over the weekend we noticed a quick break in the weather affording local bikers a chance to show their illicit skills on the streets of Kansas City, Missouri.

The clip is a bit of a mishmash of stunts up and down Broadway in the light of day but still offers an appropriate sneak peek as the season of lawless local roads approaches:

Looks like fun, as long as they're filling out organ donor cards then they're probably doing the world more of a favor.

While watching this clip, keep in mind that, according to NTSB stats, motorcycles comprise only 3% of registered motor vehicles in the US, yet are involved in 55% of all fatal accidents, 92% of which are single vehicle.

Pot holes will kill them. Other than that, there are a hell of a lot worse things to worry about in this shithole. They're not shooting folks.


Do that in fromt of me and I will knock you off of your little bicycle. Stay out of my way.

Saw some out on Shawnee Mission Pkwy Sat. The urge just to run over these moron idiots is soooooooo tempting.

Hopefully they will all get killed in accidents this summer.

As the temps go up so does motorcycle crashes. I'd say natural selection at its finest. Bye bye.

I’m with 4:40 on this one. The potholes....I mean just knowing how bad the potholes in kcmo are why would you ride a bike like that? Then the duct tape ambulance (the meat wagon) will
Come pick you up.


I’m with some of you on here as well. When I see them “stuntin” like that I have this huge desire to slam my foot on the gas and ram them.

BOYS WILL BE BOYS.

7:21 please check your aggression. Such a tough guy. Raging out and running someone over in your car... WTF. Seriously? You need help man.

Just another display of people breaking the law and police doing absolutley nothing about it! For the rest of us, we need to follow all traffic laws because we will be pulled over and cited for it, for example late to work and driving 10 MPH over the limit. Apparently motorcycles and the young morons who ride them are above the law. Funeral directors around the city love to see videos like this, I hope they stay busy because these young pucks ride these shit bike in packs of 25-50 so that no one can hold them accountable for their law breaking actions.