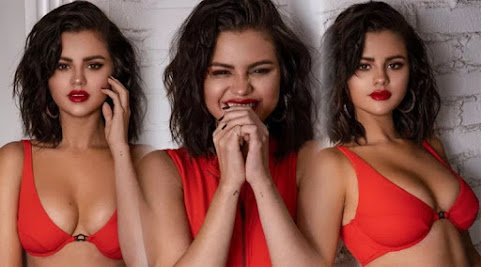 Hottie Selena might be one of the more thoughtful pop icons as of late, here's a glimpse at a recent media blitz in her honor . . .

Peeps: Why Selena Gomez Is a 'Believer' in Therapy — and Thinks Social Media Breaks Are 'Really Important'

Closer to home these news links offer a good place to start this KC FIRST FRIDAY . . .

Green space is planned for a strip mall near 103rd Street and Wornall Road, which was flooded by Indian Creek two years ago.

KANSAS CITY, Mo. -- Roger Ideker remembers a calmer, friendlier river that lured his dad into buying and farming land in Holt County. He even joined him in the family operation. "He had a vision that farm someday would be of value," Ideker recalls about his dad. "Why?

Tribute To Grad After Gunfire Tragedy

KANSAS CITY, Mo. - A group of Kansas City area women has discovered strength in numbers, banding together as 100+ Women Who Care KC to maximize their collective charitable impact in the community.

We can't all afford an island vacation, but you can have a moment when you feel like you're gazing out at the ocean with an umbrella drink in your hand. TikiCat, the tiki cocktail lounge in the basement of HopCat, celebrates its second anniversary from 2 p.m. to 1 a.m.

7:14 I don't think your penis is big enough to handle someone like her.

So the poor, poor Farmers who bought land in a Flood Plain are complaining about floods, right?

And these "promises" that were made to them are recorded where?

The Women Who Care article was of interest because it's kind of a micro United Way. Much more direct. I bet the original United Way felt like that--find a need, and fill it. It's just gotten so corporate and soshie, so many "suits" running the show, and then browbeating corporations to guilt trip their employees into pledging, so that their boss wins a stupid award. And then those big bosses marketeer their companies to the public as if they are somehow better.

The Women Who Care business model is a return to doing good without so much preening. Yes, there is screening. The 3 applicant orgs must have their act together enough to do a prezi. I like it.

So are they going to get to strip 45% of every dollar donated off the top for "Administrative Costs" like United Way gets to?

Wow, 10:45--has United Way gotten that inefficient and greedy? I had no idea.
I guess it is reviewable on one of the two big charity ripoff review orgs,
but thanks for sharing it here.

Looking things up takes alot of time.
tony saved me much time today with this story as well as one about a mental health conference, for an artist who has a perfect work of art that would look good at their offices. I never would have found that list or that conference otherwise.

the Star's website is impossible to navigate.
We are very fortunate to have TKC in this town.

If it's not shared on this site, well, just how important is it, after all?

Green Space in a flood zone, novel concept. When is some TKC dipshit poster going to comment about EPA regulations out of Washington DC and how environmentalists are ruining everything?