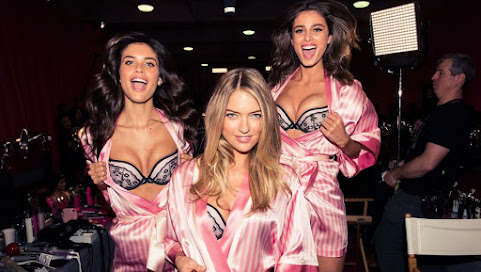 Right now we talk "renaissance" for a global brand and international influence . . .

Adweek: Is Taking the Victoria’s Secret Fashion Show Off Network TV a Step Toward a New Dawn for the Brand?

Closer to home, here are the news links worth a peek right now:

Shares of Kansas City Southern KSU have rallied 26.6% so far this year, outperforming the industry's 23.3% increase. Reasons Behind the Price Surge Impressive growth in carload volumes has been bolstering the company's performance. Although volumes dipped during the first quarter of 2019 due to service disruption, the 2019 outlook for the same is encouraging.

Hide Transcript Show Transcript FOR LICENSING AND DISCIPLINING MEDICAL PROFESSIONALS. KMBC 9'S WILLIAM JOY SHOWS HOW YOU MAY HAVE A DOCTOR BARRED FROM PRACTICING IN ANOTHER STATE AND NOT EVEN KNOW IT. WILLIAM: EVERY DAY, TENS OF THOUSANDS OF PEOPLE CROSS BACK AND FORTH BETWEEN KANSAS AND MISSOURI BUT FOR MEDICAL , PROFESSIONALS, DISCIPLINE SOMETIMES STOPS AT THE STATE LINE.


Flood fatigue sets in for businesses, residents along I-29

HOLT COUNTY, Mo. - People who live and work along Interstate 29 in northwest Missouri have seen "road closed" signs off and on since March, and it continues to take a toll on businesses that rely on highway traffic. "It's like a ghost town," said Mendy Lewis, who manages the Garden Inn Truck Plaza just off the highway in Forest City.

Tales From The Pole


After 30 Years Atop Telephone Poles, These Kansas Line Workers Have Tales To Tell

Shelley Staib held the "best job ever" for 30 years. In 1975, the Shawnee writer was one of the first women to become a lineman for Bell Systems. The position gave her a great deal of independence, allowed her to work outside, and every day was different. She's now retired.


More water being released upstream into Missouri and Kansas rivers

With the Missouri River at moderate flooding and the Kansas River at minor flooding in Wyandotte County, water releases are increasing from reservoirs upstream. The levees have overtopped again within the past few days at the Wolcott area of Kansas City, Kansas, on the Missouri River, near I-435.

Saturday's storms will be low on the severity scale.

It would be different if the ford plant was actually in kc, it’s in claycomo, the truth of the matter is most ford workers don’t live in killa shitty. Smart move on their part to avoid being murdered and paying those ridiculous taxes, think I’m lying? Ask a ford worker for yourself.

^^and yet most of the workers do live in KC. Weird.

Immediately following the fashion show, officers got their hands on 3 who were concealing 38's and 44's!!!

Some Ford/Claycomo current personnel and retirees are here in our Dotte burbs near KS Speedway, and rural surrounds. Same for GM/Fairfax. Those UAW wages afforded them decent homes situated in the good public school districts of Piper, Basehor,Bonner Springs, and Tonganoxie.

Bring ALL those vehicle components manufacturing jobs to our nation. Asia and Mexico have plenty of the electronics production for phones, TVs, appliances, lawn equipment, watercrafts, and too much more.

It's MAGA that KCK has immigrants who are buying the new and near-new cars and trucks. I'm seeing real nice rides with WY tags throughout the older hoods, at the Spanish masses, Sporting soccer, T-bones, and many shopping spots. Gracias!

Doesn't anyone remember that "releasing water to keep upstream dams from collapsing" was the cause of the 1993 floods we experienced?

Deja Vu all over again!