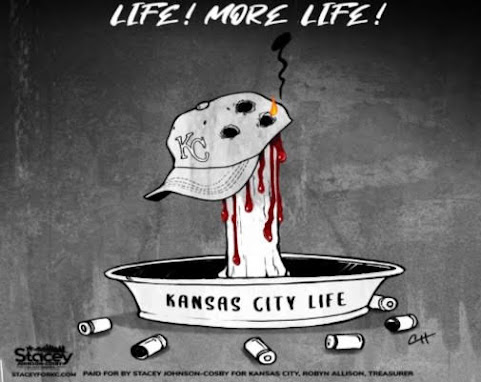 Apropos for Sunday and one of the standout council statements about the plague of rising violence in Kansas City proper.

We Must End the Violence

“I believe in the power of art to raise awareness about important issues, and through this heightened level of sensitivity, transformation can take place” Johnson-Cosby said. “Kansas City is the 5th most violent city in America. We had 134 murders last year and are on pace to match that obscene number this year. Something must be done, but before change can happen, change must start in the hearts and minds of those responsible for this devastation. “

According to a report released by the Federal Bureau of Investigation, Kansas City has more homicides per 100,000 residents than almost every other city in America, even outpacing cities like Chicago and Detroit, which receive the majority of violent crime headlines.

Cool. But would also like to see more info about legislation and a crime reduction plan along with her position on more police.

^^^^Did you call her and ask her position instead of posting about it here where nobody cares???? Moron.

^^^^Did anybody call you and ask your position instead of posting about it here where nobody cares???? Moron.

I thought the great Justus was going to fix the crime. After all it was the great Sly James that appointed her to lead the task force.

I thought you would have something better to do. We were both wrong.

$50.00 says that no one in the fuckin room, will assign agency to the actual group of people, defined by skin color, that creates this havoc.

In fact, by the end of the "summit", there will be an emphasis on "White Privilege" and the effects of "Racism" that the attendees will blame for the deaths.

The solution, will be to form more organizations, funded by YOUR money to fight the problem.

The problem, is that Democrats need the Black Block Vote to achieve purchase of position and your money, so..., there will NEVAR be any attempt to actually place more cops on the streets to "Stop And Frisk", or, any attempt to do ANYTHING that would potentially offend a large percentage of the Democrat/Socialist/Fascist voters who control City Hall and the "Narrative".

^^^So why don’t you move then? Too lazy or too broke? If you hate it do Much, split loser! Go! You’re fucking boring and repetitive.

^^^So? Big fucking deal. Leave! Go! Spare us your deranged rants! You do nothing but rant and rave. Leave the city to those who do rather than those who talk, and dude you. Talk. Too. Fucking much.

10:03 So? Big fucking deal. Leave! Go! Spare us your deranged rants! You do nothing but rant and rave. Leave the city to those who do rather than those who talk, and dude you. Talk. Too. Fucking much.

Stacey Johnson-Cosby is the best candidate running for city council. She has done more for the citizens in her Kansas City neighborhoods than any other candidate including a holding job fair for $15.00 per hour plus jobs. She is running for 6th district at large, so the whole City can vote for her. Visit her web page StaceyforKC.com to see her plan for the City. Her opponent probably hasn't been East of Troost.


Lock and Load! Everyone knows nothing will get done!

Step one - Declare Martial Law. quarantine (nobody in or out) the "Inner City", using the Missouri National Guard.

Step two - KCMOPD initiates a stop-and-search plus a house-to-house search for illegally possessed weapons, confiscating any found and detaining anyone (underage, felons, mentally incompetent, etc.) for prosecution under Federal Firearms Laws, and also arresting anyone with outstanding warrants or charges. Also file City charges for any Residential Code violations discovered.

^^^ nuke the quarantined area, there, fixed it for you

Talk, Talk, Talk, and more talk. I swear this issue has been talked to death and the root of the issue exposed each and every time and nobody with power to do something about it will step forward and do the right thing.

Keep voting the same idiots into office and keep having more talks it's the democratic way now it appears. Talk about for so long everyone gets sick of hearing about and no longer mentions it so the leaders can move on to other things like wasteful street cars and unnecessary complete new airports.

Build all the shiny stuff in the world you want it isn't going to make the issue of killing go away.

^^^^And you just bitch and bitch because he points out what is the truth. While he may not live here, he has some vested interests unlike you in the city. You do know most of those who run and force what happens in our city don't live here either? Least Dave speaks out for the good of us all.

1:29 yes, you just got your dumb ass handed to you, it was a really good smack down of your punk ass! Time for you to give up, you’ve been here all day and continually get smacked around, stay in your trailer in frogsknob and dress those nasty bleeding wounds you sick s.o.b.

Oh snap! Stupid Dave got knocked the fuck out!!!!!

Politicians will do nothing to stop violence. They can appoint all the people they want. People in the neighborhoods will have to run all the bad guys out. Oh wait. most violence is between known individuals who normally do not commit crime.

Andrea Bough is the better candidate for the 6th district at large.

Andrea Bough is a terrible candidate, she's just a puppet of her obama-appointed judge husband