On this stormy gathering there weren't many lines worthy of thunderous applause but we noticed something just a bit shocking.

Her victory wasn't decisive but she proved she was able to counter punch as Quinton Lucas seems a bit petulant as the aggressor in a faux cross-examination. 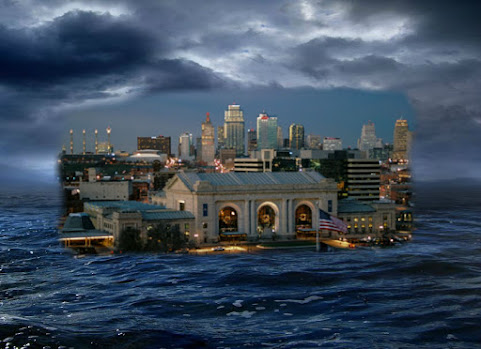 This town continues to sink underwater as infrastructure and flood control have been long neglected whilst politicos worry about developer handouts and social justice.

Here's the debate livecast for those who didn't spend their time on this one already.

The basement blogger worries about basements. That is comedy my friend.

Maybe Jolie Justus won or maybe Quinton Lucas is just getting bored and tired of cleaning the floor with her every time they meet at these forums. Tonight it was obvious that somebody lit a fire under her. She was very anxious, very quick to answer and she took up a lot of time. I think she went over her alloted time with nearly every answer.

^^^^^^Cocaine has also been known to cause that sort of reaction.

I'm going to write in The General!

Noticed more people watched this one, it was probably the bad weather. Some of the questions were obviously geared toward quinton, I think the media prefers him because they're scared of being wrong.

Both candidates were equally worthless.

Common sense is now an endangered species. Stupidity has taken over the world and unfortunately there is no known cure.

Somehow there will be a group of resist weirdos in KCMO who will seriously blame trump for flooding flooding.

Vote for either one, Quinton Justus or Jolie Lucas, the MOMENTUM is just going to keep rolling along!

I bet an LGBTQ parade will fix the flooding and potholes.

They've all been 10-9 or 10-8 Lucas. At the very best, this was 10-10. Jolie may have a puncher's chance, but nobody is knocking down Lucas. She's too slow and awkward, while he's too quick and creative.

Anybody seeing this different is either bored, desperate for a storyline, or hopelessly clueless. Even with Jolie's best effort yet, she remains a Vegas longshot.

Flooding problems, affordable housing, homicides, debt, and all the rest of these "issues" being discussed at these forums will completely disappear from the priority list regardless of which of these politico insiders becomes mayor.
Neither of them have said or done much of anything about them and other basic service problems during their tenures and that's not going to change one bit.
Identity politics, social justice posturing, empty statements about national and international issues, and all the rest of the usual distractions will continue to be the bright shiny objects in the playpen of KCMO government.
And it all costs KCMO taxpayers only $1.5 billion every year.
Pretty expensive day care.

Because of the potential flooding both candidates should have said that they would have postponed the debate in the best interest of the taxpayers. But no hey brother have their ego brushed showing that they're completely out of touch with reality and the needs of the taxpayers.that's why we need a write-in candidate to combat these two, cat that's become more like a Shakespeare comedy and tragedy and a farces

Don't most here, the 80% that don't or no longer vote in Killer Shitty basically think the political elite of this city are corrupt scum?

Show these losers the door. Vote for Clay

Quinton Lucas was raised by a "single-mother" and experienced "homelessness" as a child! Why does he mention this at every opportunity? Quinton holds up the line at the coffee counter because he insists on telling the staff about his troubled childhood.

If these two losers are the best the city can offer up for Mayor... there is trouble ahead.

I suffered through most of the debate. I was underwhelmed with both of them. I saw nothing that would make them qualified to lead a city... or anything else. I'm not sure they could lead a parade.

So, your choice is simple: Vote for the Black Socialist, or the White one. Either way, you get a Socialist. Their answer to every single question was more money and more government. In their world, government is the solution to every problem.

I don't live in KC thank God, but I do have income property there. I heard a lot of noise about rent controls and affordable housing. Those are Socialist's favorite topics. Rent control is a disaster and has failed everywhere it has been implemented. Section 8 is supposed to help the poor find housing. Do we need another program?

It's sad one of these two will be mayor and it will most likely be lucas. This city is retarded.