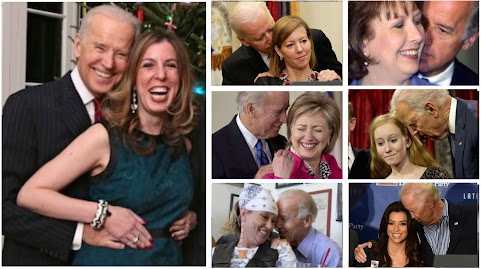 He's already got a handle on the national media, now we wonder if this Obama-era comeback candidacy will play in Kansas City.

CNN: Joe Biden announces he is running for president in 2020

UST: Joe Biden uses Charlottesville as motivation for 2020 run: 'We are in the battle for the soul of this nation"

Morning Consult: Joe Biden Is the Front-Runner — Over Democrats, and Donald Trump

So I guess this year is not the year of the woman?

327 Million people live in the United States and the best we can do is the cast of usual characters for each election.

Will third time be a charm? One can only hope and pray the answer is no.

^^or, more likely, the answer is yes as the current occupant of the White House is a dementia-addled, dummy whose looking at jail time when he loses the election.

9:43 AM You seem to know quite a bit about dementia.

Hope you get better soon.

Creepy Uncle Joe is basically the best the Dems can do right now. Meaning that this feel-up champion with his ties to the Obama disaster can maybe scrape a few votes back from centrist liberals who have been leaving the party due to the silly far-left wokeness.

Time will tell. Maybe the Dems will actually have a convention and not rig it like last time. So deeply concerned about election tampering and all. ;)

Trump in a walk, because the Dems wasted years in Russia fantasies rather than developing a platform or strategy that works.

Voting for Biden would be the same as saying your brother is Byron.

On The Slyway To Hell said...

Welcome To The Race, Sleepy Joe

She The People said...

Joe Biden is an old and very sick man. He may not live through the primary season, much less into November of next year.

He can barely whisper without losing his breath and his skin is a thin and papery as velum. He is better than the rest of the complete lunatics that seek the Oval Office, but the boxes he needs to check, in order to motivate the splintered, squalid, "identity politics" driven Progressives to the ballot box (Gay, Black, Female, Tranny, etc. etc.) does not exist.

He is an old white guy on his last legs and all of the apologies for the color of his skin just don't cut it anymore. He is the personification of what the Democrat/Progressive/Fascist party hates, an old white male.

The grind will kill him before the Convention.

Baltimore Mayor (Soon to be ex) Catherine Pugh another Democrat who wanted Trump charged while running her own crooked shady deals.

Those Democrats working everyday to see that Trump has an easy road to reelection.

My bet is Sly, Justus, and Lucas will vote for Trump.

Biden is the jeb bush of candidates. Dems are fucked

Pennsylvania's unemployment rate dropped in March, becoming the lowest on record as the state noted its highest level of employed citizens in recorded history.

A favorite phrase of the Democrats: "We can do better".

chuck would certainly know about old white guys on their last legs as he is currently one.

I don't know who I'm voting for, yet, but I know it won't be an old white man.

Trump may not be the Republican Candidate. Even without the Mueller report, the things he's done this week alone are impeachable offenses.

I'll be voting for a woman in the Primary & a Democrat in the General.

Quite a conundrum Byron. Mao Tse Tung, after a sex change operation might be "woke" enough for you, but he is as dead as Joe Biden soon will be.

She hates whitey, is female (Maybe) and has oatmeal for brains.

There ya go pal.

Biden’s slogan: everyone else just rubs us the wrong way.

Even better, I hear Maxine's James Brown weave has it's own twitter account, just vote for Maxine's Weave!!!

Now THAT is fuckin WOKE!!!!

Carlin quotes: Think of how stupid the average person is, then realize half of them are stupider than that.

The main reason Santa is so jolly is because he knows where all the bad girls live.


If everyone drove around with the stupid bumper sticker that said feel the bern they will embrace a old groper.

BTW where is geezer hater on this I'm sure creepy uncle Joe wears cream proof depends. Oh forgot, must be his Byron day today.

This will be Fun to watch Sit back and INJOY the Show .Kansas City Missouri. Will Go With TRUMP. The Northland and Eastern Kansas CITY TRUMP SUPPORT. AND many minorities. They will vote with there pocket books .And Missouri is a Red State with a Good Economy. The Socialist loose again .

Just wait for the wpomen who joe Biden grabbed by the pussy! They should be coming out of the wood work any day now!

Will Biden get all handsy with Buttfuckigieg? Unlike the women Buttski may like it.

At least he doesn't grab pussy and brag about it.

^^^He never said he did that. He only suggested an influential male could get away with doing that to an ambitious woman. Willie Brown and Kamala Harris have proved him right.

Calling out Biden for being 'touchy feely' by Trumptards is super rich.

Chuck calling Biden very old and sick is kinda neat too. He looks like a male model next to that fat fuck in office currently.