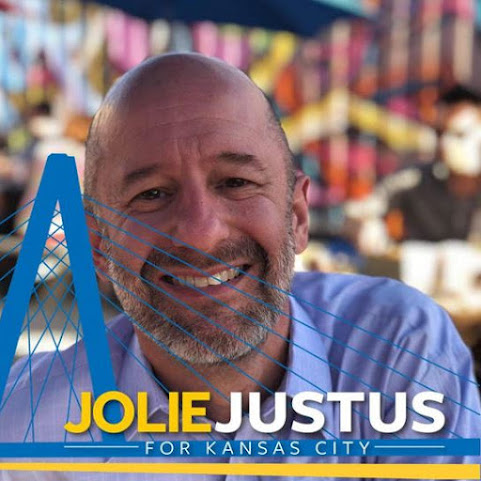 We've noticed quite a few Jolie Justus supporters using social media filters and frames to show their endorsement of the lady who might be Kansas City's first openly lesbian mayor.

Jim Giles currently works as Director of Council & Community Relations, in the Office of Mayor Sly James. And his recent profile photo filter reveals a great deal of support for Jolie Justus for the next Kansas City Mayor.

We've talked about power player Mr. Giles recently and his tutelage under Steve Glorioso along with his leadership among the local LGBT community. Behind the scenes, it looks like he will play a major role in the next administration should Jolie Justus prove victorious.

Jolie has more support locally and among people who work in city government, in a close election that will likely make the difference.

The mayor and his staff are all in. Unfortunately, he's not as popular as the media think and his endorsement won't have much impact.

Absolutely will vote for Jolie, she has been a great council member and she will be a great mayor. Everyone who knows her, loves her and she has been a force for KC much longer than most on the council. Can't wait to vote for her!

Jolie will not win. KC must have some kind of decency!


People act like the first openly gay person is something to be proud of. It's not, it's a mental illness! It's not normal in any way! But if enough people say it is, it must be true, right?........NO!

BTW Sly is the most hated man in the metro area!

I'm nice to everyone to their face just like all KC Scumbags said...

Quinton will lose to her and her minions if he doesn't get busy.

Sure the existing city hall workers are backing Justus who went to the school of Sly James on how to ruin a city in two terms.

These employees like Giles know if a really good person were to be elected Mayor they would shortly all be out of jobs due to their past performance of doing a whole lot of nothing.

Putting LGBT's in to office based on the fact they are LGBT's makes as much sense as hiring that Socialist Nazi Byron as your head school bus driver.

If the LBGTQ?? community is backing her because she is one of their own,. that is pathetic. What ever happened to voting for the candidate with the best experience and qualifications. Jolie has never been in a tough situation. Her claim to fame is pushing through some legislation in Jefferson City to make abortions easier to get. She thinks it's OK to terminate a baby in the mothers womb at nine months. This is nothing but infanticide. Do you want someone like that for your mayor?

LGBT for jolie! she wins.

Go Tony GO! Keep deleting as fast as you can. Any alternative viewpoints must be deleted as soon as they're posted to give thee impression everybody agrees on here! Hurry up!

^^^^ Nobody gives a shit about your alternative viewpoint. If only they did maybe you wouldn't be on a blog. I see that TKC kept your comment here, if he censored as much as you say then maybe he would have deleted that too. Filthy liar. It's all in your head DUMBASS.

Jim is a great guy. He will get Chief of staff when jolie WINS!

I'm probably going to catch hell for this but this in part is from a ongoing conversation I had last fall with a friend before the last general elections around here. We had been discussing how candidates are being chosen in elections now. I think that many of us are thinking in our minds but as a rule or due to positions we hold can't come out and say it. Well I just recently retired so I no longer give a damn. As they say the truth will set you free and honesty is always the best medicine. But isn't it time we started looking at where this country is going and what appears to be the major contributor to it's spiraling out of control.

How can you trust people to run your city or country who can't even behave in a normal hetrosexual manner.

How do you trust someone with millions of tax dollars who can't deal with the reality of who they really are?

How can you trust someone to look out for your best interests as an elected official when they themselves believe they are exempt from the laws you the voter have to follow.

America was built on the foundation of families where the family has a father/male and a mother/female and nobody who can't or won't follow that style of living or life has no business being in a public office leading our nation on any level. Family morals has to be returned to this country if we are expected to survive.

What my friend and I talked about to me is important because it's the truth and if you deny it's the truth then far as I am concerned you are a part of the problem. Allowing elections to take place where you see candidates such as Jutus and Lucas ever being elected to any office or much less allowing to even seek office is contributing to the downfall of our country. Being LGBT isn't a right, it's an abomination that is ripping our country apart while being offensive and opposing to the things of God.

The LGBTQ-BLT-BBG-ROTFLMAO-LOL-OMG will dive right into the elections/campaigns and perform whatever deeds necessary to lick their opponent.

Sodom and Gomorrah of the Great Plains

^^^ that might be true but I don't think quinton would be much better.

Maybe if you were interesting said...

Jolie will lick the competition.

Be funny don't be a bitch.

Next we'll have a chain of Buttfuckers all over the place just like in the movie Idiocracy.

I like Jim. He's a good guy, does great work and is more professional and nicer than most of the commenters on this blog.

Are you the same Mark Mitchell I met on Grindr? If so, thanks again.

I know her and don’t like her at all. She is gross and a liar and incompetent.

Quinton is going to get a considerable amount of gay votes. They know a sister when they see one.

Quniton is on board for the kctenants housing platform. He gives real answers when asked questions when asked anything. Justus has taken a lot of devolper dollars only ever gives vague answers and will just be a sly 2.0

Good for Jim Giles.
I wish him success. He is a smart and great guy.

^^^ Right and so are millions of other people. Most of whom don't need to run or lobby on "sexual orientation".

Reading all these hate-filled(and often just stupid) comments makes me sick. TKC's commenters have to be the least educated, least intelligent/informed people in town. I hope they stay home on election day.

Looking forward to hoisting the Rainbow Flag over City Hall

I am a very generous person, so I believe everyone else needs to pay their fair share... Everyone that isn't me, I mean.

More than 300 asylum seekers surrender to armed militia made up of New Mexico residents, made up of veterans and ex-cops, after crossing the US border.

Should bus and drop them off in Mr.Giles front yard

"Under the tutelage under Steve Glorioso"

Oh great just what KCMO needs. The son of Glorioso

It's hard to believe that anyone in KCMO can imagine they're living in a serious US city in 2019.
Much less continually hype and brag about its "vitality, vibrancy, excitement, and it being a leader in much of anything.
This mayoral election resembles little more than an elementary school popularity contest or picking your favorite to star in some high school play.
When, in fact, residents will be stuck with these clowns making believe they're governing a town of 470K+ and managing a budget of $1.5 billion.
It's a laughing stock of the entire region.

I am on the board of KC white guys who like sistas,we give good answers and eat da booty so c'mon ma ebony sistas Holla at me