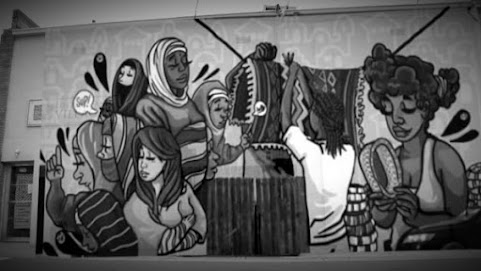 Johnson County Internets tough guys make the news but shy away from fame when the time comes to stand up for their statements.

Not everyone thinks the mural is a welcoming sign. A conservative Facebook group has an issue with the women represented in the mural.

The group, the Kansas Republican Assembly, said “showcasing Muslim women does not reflect the history, culture or values of Overland Park.”

And they want residents to, “object to this twisting of our community values and history.” No one from the group would go on camera.

In a Facebook message to KCTV5 news, The Kansas Republican Assembly defined themselves as, “Republicans with traditional values and a strong belief in the wisdom of the founders original intent of the constitution.”

They did not however say who was in the group despite repeated questions about the demographics of membership.

Given the fact that this one isn't really "news" and just documentation of Facebook intolerance and the culture of Internets chatter in general . . . We pose the question to the night owls amongst our blog community.

IS THE OVERLAND PARK MURAL CRITICISM COWARDLY BECAUSE IT'S SECRETIVE OR ARE THEY MAKING A VALID POINT?!?!

I support their right to be stupid!

Fact is, it's just not a very good mural. Looks a lot like a cartoon and doesn't seem like something I'd want near my farmer's market. I don't care about the people depicted. Native Americans and people of color do have a history in Overland Park but they deserve better than this.

Even the Crossroads batches sign on to their criticism and art interpretation. This is just more Republican cowardice from Kansas.

No wonder the GOP got their asses handed to them in March. They're too afraid and racist to stand up for what they believe in and they don't bring may people to the ballot box with their hatred. Sorry guys. YOU LOSE!

I agree with 10:24. Seems like the mural just really isn't that good.

Its watever, let put it like this, would an artist in tehran or sudan paint a mural of euro pilgrams?

Now I guess we have to act "surprised" when it's vandalized.

The bright side here is that we're having a debate out art in Johnson County. THAT is a great sign for the future!

Is common sense completely gone? Having a mural in OP depict Native American women makes sense. Muslim women? Not so much. Gratuitous diversity is a far reach and trying too hard. Why would Key West have murals of Igloos and polar bears? Or why would the jazz district have murals of Caucasians at the symphony? Love it or hate it, OP is an overwhelmingly white bread community that sits upon former Native American land. Incorporating every other race and culture into the mural is silly and just trying to make the city something it’s not.

Slow clap for 11:24!!! Nice go see some reason in online arguments for a change.

Don't like the way this was done. There should have been more public criticism allowed before it was commissioned. Now all we're left with is hard feelings in our community. Such a shame, the farmer's market is where people go to relax.

I think the balloon quote with the muslim saying "sup" is a really nice touch and represents high art at its finest.

F__k the Muzzies. They will not assimulate and they are arsonists.

It's typical Repubturd SOP. Hate everyone who doesn't look like you, get called on it, and run for cover. Like so many on here(I'm looking at you chuck, stupid dave) they lack the courage of their convictions. Phonies one and all.

The left gets their way because they act like spoiled children if they don,t.

This is bad art, and will backfire on Nicole Emanuel who did such great work converting the post office to the InterUrbanArtHouse.

It's a cartoon. Nobody would buy this as a postcard.

It shows women taunting. (the thought bubbles.) Haven't we learned by
now that men do not want to be taunted by women??

It's not even a respectful depiction of Muslim women. I can assure you, John Peterson from Polsinelli who is promoting the new Mosque in southern OP, would never suggest painting this joke on the wall out there.

I was the first Expansion Arts intern for the National Endowment for the Arts. Founding president of the 1000 member Kansas City Artists Coalition. I own a huge ethnic arts collection.

And I am a conservative Republican. Not affiliated in any way with the anonymous FB group. Everyone knows, I sign my name and own my words.

But I will say this:
1. TV5 claims no OP tax dollars will go to painting this mural.
2. They fail to mention the $15000 FEDERAL tax dollars that will. And those include tax-paying citizens in OP and across the metro.
3. Nicole Emanuel needs to rethink her choice of art for THIS wall, and substitute with something more appropriate.
4. Connect the dots. This is why Republicans in Congress feel emboldened to slash the budget of the National Endowment for the Arts. As well as the Humanities. You may win the war of this wall, but lose the funding for all your future arts endeavors, Nicole.
5. I feel sorry for the shop owner, caught in the middle. She's dancing a wire--the back of her shop will likely be vandalized. She did not SELECT this image, Nicole did. This will end up hurting her shop.
6. True, 10,000 Villages, a lovely store, like the one I loved in Westport before it became Waste-Port, will receive lots of publicity.
Not all positive. Farmers market folk will think SHE put it on her back wall. Or that most of her products are from middle Eastern Muslim countries, when they are mostly South American and African. So it is bad branding from a marketing perspective.
7. This shop owner would not sell many postcards of this street-art image. Before or after it gets vandalized by taggers.

This does not represent any part of america. GEEZ

This is as un-American as all that medieval and renaissance art from the 1200-1500s that portray the Virgin Mary as a Muslim, with her hair covered in exactly the same way - OUTRAGEOUS!

The manager of the Ten Thousand Villages shop is reported in the KCTV5 story as saying the mural is indicative of the community and the artisans in her shop. I agree that the mural reflects some of the artisans whose work is sold in her shop. I recall seeing products from India and southeast Asia in the shop, but artists from those areas don't seem to be represented in the mural, and it would be nice to see them included as well. The mural does indeed reflect that the Ten Thousand Villages store is part of the Overland Park downtown business community.

I do not agree that the mural reflects accurately our community of Overland Park in general. If that was the purpose stated to justify federal grant money for this piece, then it misses the mark. Overland Park is teeming with American White, Black, Hispanic and Indian women, and they are underrepresented in the mural. I don't really care for the artist's style, preferring the artwork of the other murals. However, if Ten Thousand Villages is happy with it, and it reflects their products, and that's within the scope of the grant description, then I shrug my shoulders.

Good points, 7:36. Tho I don't believe Ten thousand Villages IS happy with it. Just being politic and polite. She's in an awkward situation. The general public doesn't read the extinct KCStar, or TKC, and likely missed the one story on TV5. Shoppers en route to the city market the next decade will simply criticize the store for this poor choice of art. Bad for business.

I did reread the story, and they claimed the $15,000 grant came from the state. I find that questionable.

And I don't think that 10,000 Villages, which is a renter, one would assume, had any choice over the art that Nicole Emanuel assigned to the back wall of the landlord's building.

I agree with you--the style of the artwork is especially offputting. It's street art/graffiti/airbrush style. It's likely to invite graffiti desecration. And the grant won't pay for that repair.

I also looked again at the images, and the two black gals are on the right--they are not Muslim devotees, clearly, no head covering, sporting some major cleavage. Which Muslims would clearly view as disrespectful--and not want to be associated with them.

I think the store owners need to meet privately with Nicole, and see if there is some other piece of artwork she could substitute. I know for a fact that there are over 20 fine artists, women, who rent studios at InterUrban Art House, including Marcia Streepy, who has won dozens of awards. And has the distinction of once selling 83 paintings in one day to a corporate patron!

I'd hate for Nicole Emanuel to poison the grant-giving well for all her future endeavors, by digging in to defend a bad cartoon. Is it really worth "going to the wall" for this image?
She well knows, when you do a commissioned work, you offer CHOICES.