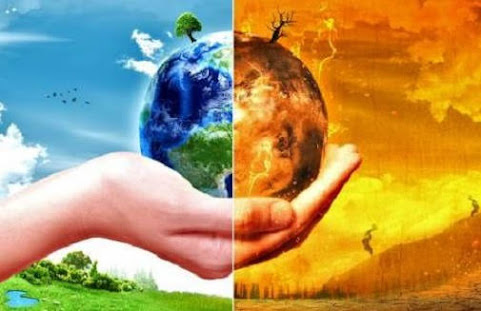 Admittedly, the talk about FOREVER tax breaks for Kansas City corporate parasites might be a bigger deal to the locals locked in to 12th & Oak politics . . . But this morning, in a brief moment of optimism, we want to consider City Hall attempting to save the world.

CHECK KANSAS CITY COMMITTING TO RENEWABLE ENERGY THIS WEEK AND OUR OWN GREEN NEW DEAL!!!

- Kansas City has been a leader in acknowledging the effects of climate change on the City, region, State and Nation.

- Mayor Sly James reaffirmed the City’s commitment to abide by the targets set out in the Paris Climate Agreement by joining other mayors from cities across the country in pledging to “adopt, honor, and uphold the commitments to the goals enshrined in the Paris Agreement.”

- KCMO is making progress to ensure that buildings are more energy efficient, wind and solar are increasingly a greater part of the City’s electricity mix, and electric vehicles are being used in significantly greater numbers/

- Council in Resolution directed the City Manager to, among other things, enter into negotiations to obtain all its electricity used for municipal operations from carbon-free sources.

Council wants to authorize the City Manager to direct local funds toward purchasing electric energy from a renewable energy resource.

And so, KCMO is ready to take a page right from the Green New Deal and anybody who disagrees is to be pitied. 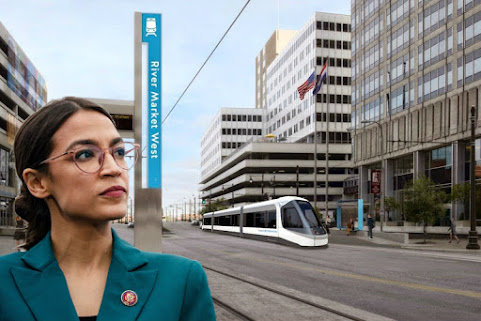 Whilst flyover country conservatives might not get it, progressives still go wild for the Green New Deal despite it's lukewarm legislative reception.

And so, not even the Prez making fun of cow farts and calling out a member of Congress as a bartender is killing the fight to save the planet in Kansas City. 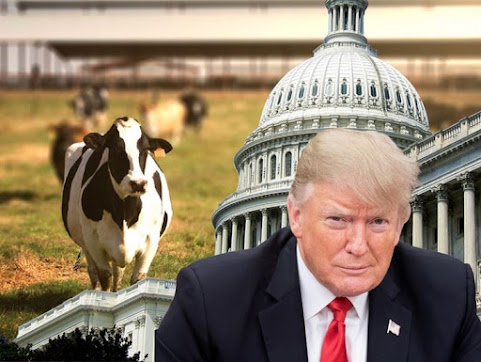 Once again, let's see how our incumbents vote on this one so that voters can be a little bit better informed.

So, they're basically agreeing to a rate increase. Thanks Sly & Council.

When the weather stays warm it's global warming when the weather turns rainy or and cooler its climate change. Which is it? Progressives go wild for crap like the green new deal are the biggest violaters of pollution and the most stupid to not see what this is really all about. Fools

Is there renewable energy for flights to Spain to look at streetcars?

This is glamorous stuff; potholes are just boring.

Sly seems to drift farther and farther off into la la land as his term slithers toward its end.
Who in the world cares what the mayor of KCMO thinks about the Paris Accords?
Wouldn't Sly and the gang be better advised to address issues like homicides, street maintenance, fiscal prudence, utility rates, and all the other things they actually have some control over and responsibility for?
What a bunch of incompetent, self-important, out-of-touch clowns!
It never changes.

^^nah they're not. They're terrible. Just a butch of dumb geezers shitting themselves. Not one was witty or worth a fuck. Do better!

WHEREAS, Kansas City has been a leader in acknowledging the effects of climate change.....yeah, yeah, yeah, just keep telling yourself that you're special.

WHEREAS, the City, in partnership with local energy providers, the business community and the general public, is making progress to ensure that buildings are more energy efficient.....while thousands of abandoned buildings collapse due to neglect, and the homicide rate is among the nation's worst.

WHEREAS, one hundred ninety-five (195) countries, including the United States, committed to address climate change by signing the Paris Climate Agreement in December 2015.....but President Trump indicated the U.S. will withdraw from Obama's boondoggle at the earliest option (November 2020).

WHEREAS, Mayor Sly James reaffirmed the City’s commitment to abide by the targets set out in the Paris Climate Agreement....Sylvester James is an asshole, pontificating on issues he has ZERO control over.

WHEREAS, Kansas City was recognized as a national and international leader in sustainable urban development initiatives....this is obviously a bad joke.

WHEREAS, Council in Resolution 181000, adopted on March 7, 2019, directed the City Manager to, among other things, enter into negotiations to obtain all its electricity used for municipal operations from carbon-free sources....this is the KCMO Democrat Way. Schulte signed agreements locking in a higher price for the city's energy needs.

China and India are the world's worst polluters. Thank goodness KC will be able to offset their combined climate damage. So thankful to Slie for his efforts. Should be Time Magazine's (yes they still publish) Man of the Year.
Sorry, "person" of the year.

100 years of fairly accurate temperature and weather tracking and the hairless ape thinks he knows what's going to happen next on a 4 billion year old planet. Sly being one the dumbest hairless apes in town knows best. LOL

Why do they waste their time with these meaningless resolutions?

A single city cannot save the planet, especially when it isn't safe to walk down the streets of said city.

Der Fuhrer doesn't understand that there's nothing wrong with being a bartender.

Has he ever had a real job?

Pathetic. While the city has serious problems with sewer lines leaking waste into groundwater all over the place, and unknown amounts of waste product going into the Missouri River....the city wants to grandstand about this looking for a pat on the back.


The people suffer financially for this crap. Progressives are such leeches.

Have you? Lazy, welfare abusing rat-fuck piece of shit.

One-and-done AOC, notoriously out of touch with her constituents and a personal treasure house of unintentional comedy, is already being marginalized by the dinosaur faction of the party. Along with the disastrous Ilhan Omar, the neo progressive new kids on the block are already obsolete.

No, Byron, Trump never had a real job.
He is rich and was born into money.
What in the fuck difference does that make to you?

You are just jealous.

This clears up the question how much more damage can this asshole do before he leaves office.

Not going to be anywhere near the damage done by BathHouse and his husband, Moochie.

^^says a goon who shits himself. Rich. Real rich.

Anything residents of the US do to the environment is useless because China and India are responsible for 85 percent of all pollution and are still going on a never ending industrial revolution. They have over 10 times the population that the US. Anyone blaming the US or thinking we can have an influence lacks proper perspective to make any sort of decision

The only non fossil fuel energy that will power an area the size of Kansas City metro an affordable price is nuclear power. Council, resolve that the City should work toward building nuclear power plants and petition the federal and state governments to remove legal barriers to doing so.

These liberals would rather see a city with blackouts from non reliable sources than have affordable energy.

Kansas City should dig a trench in Berkley Riverfront Park, install a conduit and four vaults, then backfill and restore the Park.

After this, install four water turbines (3 in use, 1 idle for maintenance/service) and an intake system to keep out wildlife and debris, allowing a intake flow equal to the lowest river flow level. Let KCPL have the generated power in exchange for maintaining the system and providing free electricity to all KCMO residences and Businesses, with KCPL free to sell any excess.

Environmental problems can be avoided by the use of a computer controlled intake system, and no water depletion would occur, since all water returns to the River.

The River flows 24/7, so no (sane) Politician could point to such a system as "loony".

^^says the gayzer who jizzes himself at the mention of the down-lows---Obamas. Ick! Real ick!

Does any member of the City's council have the guts to present a resolution to ban plastic grocery bags, straws, & plastic utensils?

Look no further than Georgetown Texas; population of mostly retirees is around 75000, to see what happens when a city goes to renewable energy.

The mayor of Georgetown in 2014 guaranteed the city’s move to 100 percent renewable electricity in 2016, signing 20- and 25-year agreements with wind and solar developers to provide all the city’s electric power.

Georgetown residents’ power bills have risen by $1,219 per household per YEAR on average above what they paid in 2014. Not a typo but yearly increase.

In total, Georgetown’s energy costs were $29.8 million higher than the city budgeted for between 2015 and 2018, leaving the city scrambling to bridge a budget gap.

Why does elitist Trump hate regular working folks like bartenders?

The senile anti-Semitic racist-in-chief thinks wind power noises cause cancer and that a solar energy grid would crash when it's cloudy and his TV would shut off. What's the oranges of that? Too many hamberders?

We see who the real idiot is.

So this is how our two idiot mayor wannabe’s are going to further sink us into bankruptcy, they both have sLIE disease, give give give all the money to developers and screw the taxpayers. Neither one of these two losers has the guts to stand up and say no..... WE’RE DOOMED TO GLOBAL BANKRUPTCY.

The only thing citizen above censored might have been a decimal.

Bills on average were up $4.80 per month in January. A new 6 month temporary increase of $12.82 per month is related to non-renewable issues.

The shortfalls in budgeted guaranteed energy costs in the long term renewable contracts are not passed to customers in their bills with thousand dollar increases. That's not how the utility budgeting works.

Double check your math work in the future.

One of three scam artists behind a $54 million ponzi scheme was sentenced to prison for her role in the biggest 'green energy' scams in US history, according to NBC New York.

35-year-old Amanda Knorr of Hellertown, Pennsylvania received just 30 months in federal prison for a ponzi scheme involving her 2005 startup, Mantria, in which "many people lost their life savings," according to assistant US Attorney Robert Livermore following Knorr's sentencing.

Can we put Sly in with them as a room mate?

Attempt English sometime. Then move on to rational thinking. Who knows? Then down the road you can dump your silly Trump hate and...

Aww, who am I kidding? You're funnier this way anyway.

@3:56
Below is the source of my information. I also see articles stating your figures. Makes one wonder which is correct.

I support the president in his mockery of cow farts. AOC is a fad.

Good on @5:02 for backing up arguments with FACTs and not pointless insults!

Another Chamber swell getting a contract in perpetuity