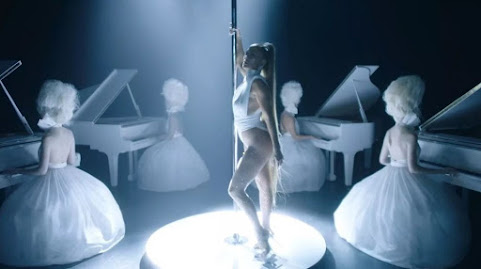 At 49-years-young J-Lo is still working the pole and inspires this quick look at pop culture news . . .

The Cut: Here’s How A-Rod Proposed to Jennifer Lopez in Case You Wanted to Know About All That

Closer to home we play a bit of catch-up and share this bevy of local news that's still worth a peek . . .

A new self-style space in Midtown is expected to offer hair, beauty and wellness entrepreneurs an opportunity to cowork under one roof without the burden of securing financing or paying for utilities, said Lauren Euston.

Eva Reynolds recently visited the 13th century basilica, calling the experience once in a lifetime. "I remember going there and I couldn't leave, it was just su...

INDEPENDENCE, Mo. - Zach Walker became the Independence city manager in 2016, and he says he's been watching the decline of retail stores since. "CNBC forecast that through April of this year, over 6,000 stores nationwide had already closed. That's in excess of the total number that closed in all of 2018," Walker said.


Could be several months before flood-damaged Lakeside Speedway opens

KANSAS CITY, KS (KCTV) -- The track is still flooded at Lakeside Speedway, but it's certainly come a long way from where it was three weeks ago. Pete Howey just bought the track in 2013 and is keeping very positive about the mess the flooding left behind.

RAYTOWN, Mo. -- Firefighters with the Raytown Fire Protection District are winning hearts all over for a recent kind deed they did. A video posted to their Facebook page shows that a group of firefighters stepped in and helped push someone home when their electric wheelchair stopped working.

The report from Maplight found independent groups spent $15 million to influence the 2018 state elections in Missouri. It also found that more than 10% of independent spending in candidate races, and more than 35% of spending in campaigns for ballot measures came from groups that are not required by law to disclose their sources of funding.

The Rockies are coming, and I'm worried. Driving my $500 Postal Jeep-a vehicle that I found with a weak pulse and then nursed back to life-on flat roads is one thing, but trying to ascend and descend steep, long grades will challenge this 1976 postal Jeep in ways it's likely never been challenged, on roads for which it was not designed.

GLENWOOD, Iowa (AP) - The federal agency that manages dams along the Missouri River received stern criticism from several U.S. senators Wednesday during a hearing held in Iowa to examine the massive spring flooding this year that caused more than $3 billion in damage in the Midwest.

Good Deed From The Kansas Guv

Gov. Laura Kelly has signed a bill that protects the identities of Kansas National Guard members who undergo counseling. The legislation signed by the governor on Wednesday is designed to encourage service members to seek help if needed. It will exempt counseling-related notes and records from open records requests and court proceedings.


Study: Some land along Hyperloop route is private property

KANSAS CITY, Mo. - Reality is setting in as new details surface about the proposed Missouri Hyperloop between Kansas City and Saint Louis. Many are praising the project for its potential to transform high-speed travel. However, some property owners along the proposed route could be concerned about information in a newly released study.

KANSAS CITY, KS (KCTV) -- Queer Eye has completely changed Jones BAR-B-Q. Crowds are normal now with fans and regulars waiting for the chance to get their hands on this now world-famous BBQ. "It's always been busy, but nothing like this," Deborah Jones, who is one of the owners at Jones BAR-B-Q, said.


Breezy, cooler temperatures ahead for Thursday

If you have tree pollen allergies - today is not going to be a good day.