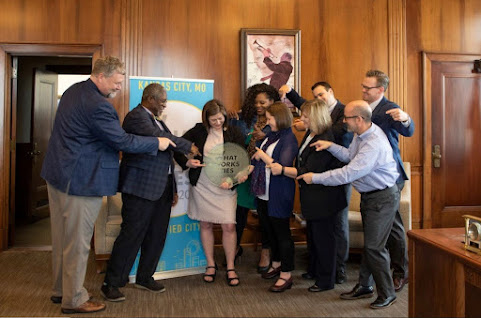 Cringe-worthy celebration from the mayor's office after his recent East Coast junket. Take a look:

Kansas City achieved Certification at the gold level, moving up from the silver award in 2018. The accomplishments that Kansas City was recognized for include passing a law requiring the local government use data in decision-making. This ensures that data-driven progress will continue, even as Kansas City prepares for a mayoral transition . . .

“Data helps city leaders understand problems and measure success, and it helps citizens hold government accountable for meeting public needs on all the big challenges we face – from promoting health and safety to fighting climate change,” said Michael R. Bloomberg, founder of Bloomberg Philanthropies and three-term Mayor of New York City. “Congratulations to all the cities that earned certification this year. Their efforts are improving lives locally and setting an example that can spread nationally.”

“This year’s gold certification reflects years of hard work from many dedicated and skilled city employees,” said Mayor Sly James. “I’m proud of what we’ve accomplished with DataKC, and I know they will continue to innovate while helping to drive policies and initiatives that move Kansas City forward.”
#######

Schulte, James, and staff beg each other to "PULL MY FINGER!!!"

Oh no! We have a narrative here!! This goes against what we complain about! How dare anything good happen to KC!! This cannot stand!!! Oh no!

OMG.. Think I'll rush out right now, put in my earbuds, grab my phone, and read data on it while casually strolling down the freeway.

DataKC sure did not fix the potholes, plow the streets this winter, prevent terrible drinking water, fix any failing infrastructure but it did allow KCMO to reach top 5 in most dangerous town and top 10 in most in debt town in national listings.

I see some obese hogs pointing at another obese hog.

Or is that the fat cats who are ruining Kansas City?

Or did Jolie rip off one of her famous farts and all are pointing at the guilty party?

Employees of the city are pointing at who not to vote for as Mayor.

Troy Schulte is so big (tall + wide) that he makes everyone else in the photo look like Hobbits.

Yup, but he'll look a lot better after June, when he moves "up" to Keokuk as their new City Mis-Manager!

Talk about a Biggie Bow-Tie twin. Only a slight difference is that billionaire Baddie Bloomjerk has had 3 mayoral terms to FUBAR his city. Oh, and his corporate welfare pig troughs for his cronies are WAY bigger than the KcOWTOWN'S. So a result is a much bigger scale of gentrification and tax-burdens on too many in NYC. He's credited with policies that created 83% more homeless there. Plenty more bad news about Bloomjerk in that article!

Who's the Fat Broad trying to steal the Plaque?

The clown car in a rare group photo. There's another, not widely circulated or available, of all these swine playfully feeding themselves at the public trough. The one where they're serving the developers is best not mentioned. Corruption and incompetence is so cute and funny!

What’s the data say about all those fat people in that picture! Hahahahaha!

So, does this mean you'll stop killing each other now?

based on the data presented, someone needs to wear closed toe shoes to work.

PRETTY FEET ARE SWEET! But, please keep neglected pedicures out of view, AT WORK AND PLAY! said...

Agreed, 1:20. General dress code for office attire at respectable firms prohibits "sandals", or open-toed shoes. Some firms allow specified casual footwear (but still prohibiting open-toed) on designated dates, such as casual days at the workplace during business hours, and for sports related outings during business hours. Codes can direct personnel to not wear tattered, dirty, unlaced and untied, offensively embellished, or unmatched footwear. Unmatched shoes, or boots, are allowed for certified medical accommodation.

This is a super sized self parody. How this passes for achievement is in the realm of high comedy.

This is a refresh on what is wrong with KCMO everything