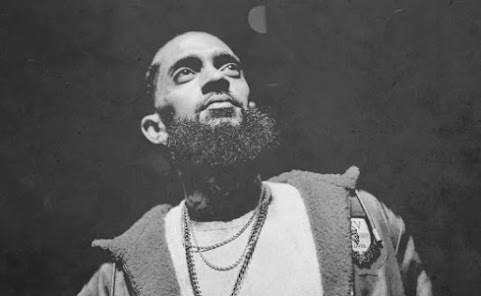 Recently, a hip-hop icon met an untimely and violent demise. Here's the background:

Atlantic: It Hurts to See Nipsey Hussle’s Life Not Mattering

Local news did't cover a gathering in midtown but there were at least a few hundred people there and the street was blocked for at least an hour. Special thanks to TKC readers to sending this quick clip . . .

No shooting, a peaceful gathering. Hope that his death won't be in vain.

Black folks were able to get together and release some baloons into the sky without shooting one another.

What a tremendous accomplishment for the KC black community.

the commitment to non violence has to go beyond vigils. I think working in the community and helping carry out the man's goals would be time better spent.

7:10 That's about the same thing as figuring out that pesky cold fusion thing for whitey.

The man accomplished far more than @7:38 ever will in his miserable life.

I don't mean any disrespect but I had never heard of Nipsey Hussle prior to him being killed by another black man I might add. If what he was doing was so great how come so few even had heard of him. Ermias Joseph Asghedom sounds like some Muslem to me. I did check out a video of him mumbling something while grabbing his dick all the time Just another Wack Lame Fake Rapper who thought is was okay to say nigger and niggas but hated whitey if he said them.

Who cares? Another thug bites the dust.

^^^^ Again and again. He did more and more people loved him than will ever love you.

Completely untrue, and not much of a response anyway. His fleeting fame was based on thug/rape culture and he died a thug's death. He couldn't even come up with an original name.

I'll take ten of the real Nipsey Russell, who was a hilarious comedian with actual talent, over this immediately replaceable shoe salesman any day.

Heard of him for the first time yesterday. Now he's gone. Go rap about it I guess.

Before his death, I had never heard of this guy.

Another black person using a fake name, living a fake life as a hip-hop gang-banger, fathering illegitimate children....stop me if you've heard this before.

And of course, he was killed by a fellow black man after an argument. Not a white person, not a Latino, not a police officer, not a woman.

Letting balloons loose is pollution. Like when they throw McDonald's bags out of their Chrysler products. Stop it.