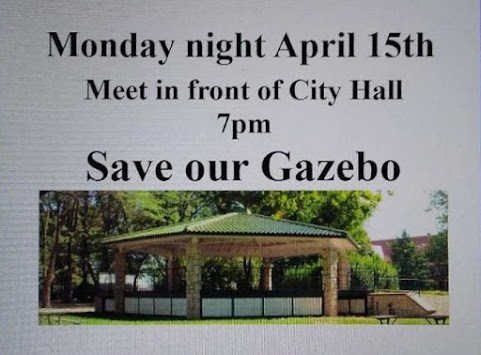 A debate over the management of public resources and a community call to action from these Johnson County denizens looking to rescue part of their community from demolition.

Please show up at the next city council meeting to help "Save" and "Preserve" the Gazebo in the park, before the City destroys it and it becomes nothing but a memory for us to be writing and talking about after it is destroyed and no longer exists.

Need a huge crowd there to show support for saving and preserving the Gazebo. The City Council will be voting on the 3.6 plus million dollar bid to renovate the park "which includes tearing down the Gazebo and the stone restrooms" too.

In some eyes it may not be Historic but over the last 35 years it has become an "Icon" to the park and to the city as well.

If the City would just fix it up and take care of it, it could last forever. An engineer looked at it recently and said with it's solid steel beam construction it could last another 1 or 2 centuries.

For some reason the City has gone to great lengths to try to convince the public, and themselves, that it needs to be torn down, some city staff members have even resorted to a rehearsed speech saying it is full of wood rot and electrical issues that has not been fixed and one staff person is even going around saying possums and snakes are living in it and that it is structurally falling down, even after we told them we had an engineer look at it and he said it is good for another century or two, amazing.

The only thing that will be left is the Carriage House which now has broken roof tiles that the city has not yet fixed either.

This is the typical ploy cities operate. They let streets fall into disrepair and then put a street repair program tax on the ballot but use the funds for other things. They let buildings get dirty and minor things break and are not fixed so that they can put new and fancy community centers on a ballot to get a sales or property tax increase. Then they tell you that you voted in favor of these things when your taxes skyrocket. It is called TAX AND SPEND GOVERNMENT.

^^Wow. Remarkable. What are you prepared to do to change it?

^^We will petition Tony to ban your troll ass is what we will do about it.

Never knew the Golden Ghetto was where paper airplanes originated?

@11:18AM You'll do nothing of the sort fat-ass. I dictate terms on here, and I declare myself your God and father. As such, I say shut your dick hole. Copy that?

You would think that the city of OP would take care of this. With as many people coming to old downtown to shop.
I am sure that on a good month they take in enough tax money to fix it.

Hey, I liked those orange street lights that used to be everywhere.....but the city got rid of them for something "better." I'll survive. So will you.