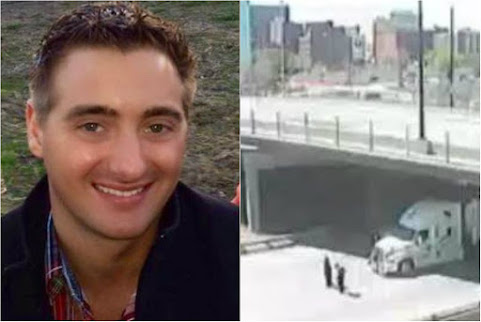 For the record, nobody walks through the downtown Kansas City loop along the route Jared Miller took leading up to his untimely demise. There's no pedestrian crossing, it does not serve as a shortcut nor is this an easily accessible path. Even the hobos who sleep under the bridge know that walking across this part of the loop means certain death - These are facts important to any discussion of KCMO pedestrian public safety.

On a brighter note, after the death of a celebrated downtown Kansas City advocate, his friends have contributed greatly to a crowdfunding effort that hopes to support Mr. Miller's wife who was obviously distraught after the tragedy.

In two days they've raised more than 5 grand among more than 100 contributors.

Again, news notes have been vague and mostly serve to tout hype for the Downtown Renaissance whist callously using this tragic demise as another opportunity to push talking points :

Meanwhile, the deets remain mostly a mystery and a few notes to our blog community call some of the speculation in the comments "clueless" whilst they fail to offer any more info.

Nevertheless, we respect that viewpoint and note the victims of this tragedy shouldn't feel compelled to explain anything during their time of loss & grief. BY THAT SAME TOKEN, using this horrific tragedy to bolster a controversial downtown-development-focused agenda reveals an abhorrent, ruthless and cynical stratagem deployed by proponents of endless downtown taxpayer subsidy. These ghoulish sponsored content pros will stop at nothing to attain their political goals as they utilize this terrible loss for their own benefit.

Why didn't he just walk over the freeway on the overpass on the sidewalk provided I am just not getting the logic of this debacle.

I would think that someone that is supposed to be a traffic engineer or expert would know better than to walk across an interstate highway. I feel sorry for his family and friends but what was he thinking?

No surprise they are using this tragedy to push and promote the tax and spend for ridiculous and stupid projects agenda.

Not shocked or surprised at all the bastards would stoop that low.


Good question. Was the scooter gang chasing him down or something?

Being a traffic engineer he did prove one last thing---trying to cross a busy interstate is dangerous.

Maybe he was trying to get out of the way of a rolling gun battle.

That would make sense.

^^^^ No it wouldn't, if so he would have just run under the bridge.

Let me guess. Your combat experience amounts to playing with rubber soldiers when you were 4.

Welp. Guess it's as good a time as anyto shut down the loop and build pedestrian friendly mixed use apartment buildings all over it.

Cover the loop. No more pedestrian access. That is the only solution.

Ah that sleazy lyin slime bag David Johnson is in the article. And Rick Usher isn't wasting any time proceeding to further feather his own nest.

Hey idiot. My five year old kid is smart enough to know you don't try to cross the freeway.

People do stupid things. I suppose that stretch of road should be named Jared R. Miller Freeway.

The blame unfortunately rests on him. You do not "run" onto a multi-lane highway. He also still had his airbuds in his ears?

The situation is unfortunate, but was preventable.

I do not even jaywalk Downtown because of the caliber of people driving. I have seen way too much working down there.

As a licensed professional engineer who has worked with HNTB there are only two answers. Stupid or suicidal. I’m not betting on one.

A 34 year old man was “doing exactly what you aren't supposed to do - crossing the highway,” Sgt. Deb Randol said.

Randol said the Medical Examiner noted the man still had his earbuds in his ears, and his phone was found on the interstate.

Dodging idiots crossing the street staring at the phone with earbuds is pretty common.

Lots of questions that will likely never be answered. One article said he moved to Brookside after getting married. Why go downtown to run around the highway if you live in Brookside. And the earphones may have been somewhat of a distraction, but even with them in, I can’t imagine accidentally running into a busy highway. If it was suicide, that’s an awfully brutal way to take your life.

If only bicycle lanes were there for him to get into salfely.

“Every man is put on earth condemned to die. Time and method of execution unknown.”

Suicide is not painless.

In the Northland Miles of fences were put up on the Jersey Walls due to morons thinking they could cross a intersate ( I-29), and all paid for by : You guessed it - THE TAX PAYERS!! WTF?

Clearly he decided to end his life. Sadly he traumatized a truck driver in the process. The city should bill his estate for the cost of investigation and clean-up.

Suicide. This person lived in my building for years downtown. he was clearly a confused alcoholic who avoided conversation and simple hellos in the hallway. This portrait of a shining downtown advocate could only be spun in such a way by the coked up, queer urbanists that attempt to dictate the entire downtown population.