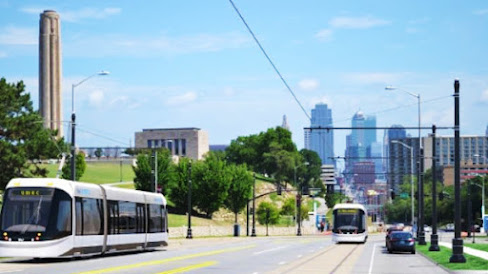 Right now there's just a bit of justice in the world and proof that undermining Kansas City voters will not be rewarded this year.

This sets back so many rigged elections that VIOLATED A CITYWIDE VOTE FOR TOTAL KANSAS CITY PARTICIPATION.

Even better, TDDs are now falling out of favor and locals are asking Missouri politicos in Jeff City to step in against so much local subversion of Democracy in the name of questionable development schemes.

The KC Streetcar project team sought $151 million in federal funding to be combined with $164 million in local funding from the voter-approved Transportation Development District for an expansion to the University of Missouri-Kansas City.

"We are in the midst of trying to figure out what this means to the KC Streetcar Main Street Extension to UMKC, but we do plan to continue working this year to get the project into the engineering phase," said Donna Mandelbaum, KC Streetcar communications director.

Not to worry, TKC reveals what this means . . .

OLD SCHOOL TRANSIT IS OUT OF FAVOR WITH THE FEDS & LOCAL HYPE COULD NOT QUIET KANSAS CITY DISCONTENT WITH THE SCHEME THAT RAN ROUGHSHOD ON VOTER & PROPERTY RIGHTS!!!

Of course streetcar advocates ignore this rebuke from D.C. but they have denied community push back and consistent rejection via open votes.

The fact is, the money is running out and when it does . . . Don't be surprised to see a lot less enthusiasm about this touristy frou-frou outdated mode of transit.

But I thought they were going to "see us at the groundbreaking."

This was a miserable attempt that violated so many election laws. Glad that at least D.C. wasn't willing to sign on.

Don't be so glad. All this means is that they'll try to impose the taxes locally.

Really shameful that so many people who claim to love this city now "celebrate" at a major disappointment for a lot of people who worked really hard on this. This is a another decision from the Trump administration but the people who want to continue our momentum will work to move this project forward. We will persist! KC voter want the streetcar and that is what guides us.

GoFUCK your self^^^^^ You know that KC voted this down. Lying ass licker.

I ask voters to look at these comments. Look at the intellectual level of people who seem to brazenly want the worst for our city. It's disgraceful and should be opposed.

The voters did want more streetcar and those long the line in Missouri approved transit development district votes gave their overwhelming approval. Now that we have a TEMPORARY setback, I see nothing but trolling from the readers of this blog and that is unfortunate and not representative of real KC voters and residents.

Shut up. Just divert a few hundred million from the illegal airport, homo.

Damn! I need to go out and get a case of bottled water to celebrate this!

Sorry, Chris, morons aside you know damn well this whole thing has been a transparent, undemocratic fraud from the word go. Deal with it.

Also, the real disgrace is your boss and how many lies you fit into one post.

Our local congressman (Emanuel Cleaver) is supposed to help us get that money. If we didn't get it you can put the blame on him.

Go4KC you continually come to this blog lying and trying to cover up the fraudulent goings on at City Hall. How do you sleep at night? Or are you one of those people who takes pills to wake up and pills to sleep at night.

The largest good I could see from Clay getting elected would be you being out of a job shortly there after.

Go fuck yourself, Go4KC. We need the god-damned streets fixed WELL BEFORE this toy train expansion.

FYI... it seems that it's too early in the process for KC to get the funding anyway, under the FTA guidelines. The streetcar expansion project isn't far enuf along yet to be allocated the funds.

6:05 PM Well then why did these idiots even bother to submit the request?

No funding? No problem!

Call Jolie Justus; she'll find $100 million to siphon off from schools, cops, and roads to pay for it.

I often think that Go4KC is just a troll that likes to see how much reaction he can get with the drivel he posts. No one can really be that dense or think that KC is operating even remotely responsibly when it comes to things like transportation and infrastructure. I think refusing to grant $150 million to the fifth most dangerous city in the nation for an antiquated mode of transportation speaks to the good sense of some people in DC.


Sly James certainly has a big mouth. No money for you KC thanks to the big mouth Sly and I think that's just funny as heck!

""We are in the midst of trying to figure out what this means to the KC Streetcar Main Street Extension to UMKC, but we do plan to continue working this year to get the project into the engineering phase," said Donna Mandelbaum, KC Streetcar communications director."

Shouldn't be too hard to figure out what this means. It means take the MAX, which already exists and can navigate in weather the toot toot can't.

Gopher-was your statement "KC voter want the streetcar" a Freudian slip? Because that's about true--just a few hundred voters inflicted this mess on everyone. Maybe now we've been prevented from making a big mistake.

THE streetcar was the local result of a fad that swept across the country peddled by self-serving clowns like Richard Florida, an "urban futurist", ho makes a living selling books and giving paid lectures featuring the very latest "must have" for airhead electeds like the clowns in KCMO.
The fad has passed.
The big big new story is now affordable housing, the "need" for which has been created by implementing the last fad, which was downtown "redevelopment".
A perpetual motion machine not unlike building more hotels and then expanding Bartle Hall to meet a non-existent need for the convention business.
THE streetcar is the day before yesterday's news.
This way to the egress!

Gokc I barely known as Chris Hernandez you are so stupid that's why you have that silly job at City Hall shining the mayor's shoes and call yourself a media person one of the voters didn't really vote for the expansion on the trolley car it was rigged election the only people who voted where the people live downtown.

Go4KC is drunk? Gotta be. Or just plain dishonest.

I have no idea why anybody would think American taxpayers should have to contribute to a streetcar in Kansas City. If area residents want the streetcar extension, they would find a way to pay for it themselves. They don't want it if somebody else isn't paying.

OMG what are the tourists going to do they will have to drive, take the bus, walk, bicycle.. and the poor students? And OMG how are lawyers going to get to lunch?

Could I have sidewalks? Sidewalks would be great.

He also licks the mayors asshole. No small job there, but he is glad to do it.

Only in KCMO said...

The KC streetcar only benifits people who pay to live down town to ride the welfare train, obviously its expensive to live down town and most people who understand the value of a dollar DON"T, the toy train is more of a fasade for our visitors who hotel downtown when they visit, its a hip cool looking thing if you dont live here and dont have to pay for a 2 mile circle jerk. What ever happened to the Light rail that the voters passed?? I guess if you are a KC tax payer your vote is wanted but once you do you can just go fuck yourself!

And by the way, The "Bird Scooters: laying around all over this town look like trash, That company should be required for its users to pick that junk up at a stand and park it at a stand, if you parked your ass randomley around this city you would be charged with loitering, and if your car broke down on the curb of the plaza, your car would be towed and you would pay hundreads of dollars to get it back. The new hip shit in this town is cool for the millenial full bearded folk, but us old fuckers built this town, and we need our local policicos to stop sucking so much dick with the tech companies to make a buck!

Sly and his group of Thugs who dominate the Council just got figured out by the Feds. This City needs to focus on responding to the will of the people with policy and direction. I am a life long Democrat who is horrified of the way this City is governed.

Kcpl kant care about people less and the chamber chumps

Check out the imploding posers of pretend tech. MAJOR UNWINDING IN PROCESS BUT THEY CALL THAT MOMENTUM

Drive a stake through it please.

Haha if it had been approved there would be confetti cannons going off and a parade foe Sly and every single local media would have it as the top headline story and the rest of the week would all be carpet bombed with streetcar bullshit.

We simply MUST keep our momentous momentum momenting!

A request for federal money to extend the Kansas City streetcar line was left in the station.

The U.S. Department of Transportation announced $1.36 billion in funding for new and existing transit projects on Monday.

$151 million to extend Kansas City’s streetcar to the University of Missouri-Kansas City was not on the list.

Local officials estimate the cost of the planned extension at $316 million.

A spokeswoman for the Kansas City Streetcar Authority told KMBC that authority officials “are in the midst of trying to figure out what this means” to the extension plan.

Yo! Obama and his Free Money Buddy Tony Foxx are no longer in the house!

Hopefully the Feds will start digging into all the fraud and order some orange jumpsuits with Streetcar Neighbors printed on the back.

KC doesn't want this, it should go before a citywide vote again. The voters have spoken.

One of the biggest scams in history.

Maybe Amazon can pay for the toy train when they build their next headquarters in Kansas City.