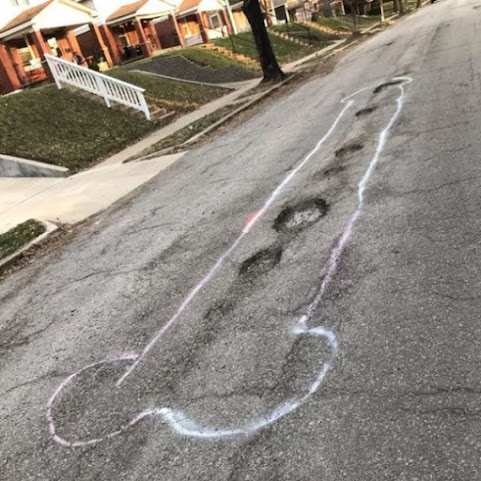 A man known across the world as "Wanksy" is an international hero for his lewd graffiti civic pothole activism and locals have adopted his methods in order to, literally, draw more attention to the shameful condition of Kansas City roads.

Before the rain, this "generous" sketch was seen on 40th & Oak where the potholes have created a bevy of opportunities for nasty sketching.

A bit more history on the method to this madness . . .

Wanksy's moniker is a tribute to Banksy, a renowned street artist whose work has sold for millions and emboldened a generation of artists to become more engaged in public, politically charged criticism.

CityLab: An Interview With Wanksy, Penis Doodler and Pothole Avenger

WILL THIS NAUGHTY TACTIC WORK TO GET POTHOLES FIXED OR DO KCMO POLITICOS HAVE NO SHAME?!?!

Kansas City, obviously, doesn't share the same uptight manners as Great Britain. This is a cowtown built for drunken losers that only earned it's national influence by way of overt political corruption, prostitution and organized crime. Some guy drawing dicks on the street isn't likely to make the locals blush or spark any change from a town that's willing to ignore murder, the collapse of Democracy, the popularity of Taylor Swift's music and a bevy of other indecency if there is a chance to make, save or scam a buck.