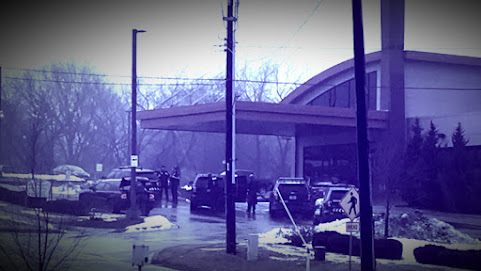 In this update Kansas City's top cop once again asks for community cooperation and justifies anti-crime programs along with social media snooping.

Sadly, the public isn't allowed offer any direct response, criticism or alternative perceptive and that's part of the reason why it's important to repost . . .

KCPD Chief: How we're working to interrupt the cycle of violence

"As a police department, we can’t make people have better conflict resolution skills. We can’t be there every time a disagreement over something trivial escalates into violence. What we can and are doing is working to interrupt the cycle of violence, like the aforementioned Risk for Retaliation work we did. It’s why our officers were conducting surveillance outside that funeral. It’s why we seek out and take seriously reports of threats of violence on social media. It’s why we’ve made a concerted effort to work with urban-core teens in programs like the Youth Police Initiative, Youth Citizens Academy and Police Athletic League. Through these and other outreach efforts, we’ve shared anger management tools and built a bridge of trust, so young people don’t try to take matters into their own hands.

"But we’re only a small part of the solution. A young person who thinks a gun is the best way to resolve a dispute reached that point long before police became involved. We are doing all we can to interrupt the cycle of violence in Kansas City, but we need your help."

The Chief is doing his job. The department is running a lot better since he took over. It was left in a disaster after the over time king.

As for teen violence, all we've tried so far is pizza parties and obviously that didn't work.

Don't forget all the late night B-Ball games for "Utes" in the 12-25 year range.

Actually, the Chief is right on target with his words. But what I'd like to see is the progress on putting more police on the streets. We can talk "community" and prevention all we want but I think it's clear the taxpayers want more cops working the beat. And THAT should be the priority.

The main job of the police is to clean up the mess. They cannot be around to prevent everything. Prevention falls into the hands of the parents and personal integrity, responsibility.

Jail would prevent a lot of murders. Just put them in prison for their crimes prior to picking up a gun. Jean Petersucker Baker should try this.

police do not have good 'conflict resolution skills'

This is why I'm voting for Jolie. She'll solve this crime problem. She is the only candidate who has experience in dealing with this kind of issue.

News Flash: The girls were fighting over a dildo that was taken from a house when the victim moved out from the suspect. (Seriously) Security at the school didn't make sure the suspect left the property and KCPD officers assigned to the school event were goofing off inside the school and didn't realize the suspects had set up outside waiting for the teen to exit.If you look at the video from the school, you will see the KCPD officers hide behind columns when shots were fired and the one officer couldn't get his gun out of the holster. (Seriously) With that said, KCPD really doesn't have room to talk about what they could or should have done. They obviously can't do their jobs to begin with by making sure the people left the property to begin with...

'built a bridge of trust'.

Not that anyone will actually read, but an example of how public budgets get out of control, and what happens after the fact.

The County's previous admin built a huge overpriced county building that they are still paying $55k per month. It's more advanced than what happened in Raymore and Garden City here. What happens if the new aeroporte doesn't manage to pay it's bills? Eventually budgets will start getting cut, and it will adversely effect the inner city denizens who most supported it, first. If that happens, the airport becomes a financial yoke that will outlast the next 8 election cycles. I wish you could teach Democrats to be responsible fiscally and otherwise, and to understand they are stewards of taxpayers dough.

Frances and The Minutemen said...

Police used the "soft, understanding, friendly and kind" approach in the 90's and now we're in the banquet of consequences stage.

^^You're right, we won't read. Pro Tip: Don't post links, nobody reads them.

@2:13, Care to prove me wrong? There is a video! From both inside and outside the school. This shooting was preventable.

God, help us! All the murder momentum and debt burden of Killa Shitty is the Democrimz SOP. They are the party of slavery, KKK, gibsme mo and mo and mo, Hilly's mentor Sen Robt Byrd, and LBJ the racist ("we'll have them niggers voting D for the next 100 yrs"), Barry kissed Muzzie butts with our Billion$ and set felons free...So FUBAR!!!

You bring up some good points.

Yes, Democrat run cities tend to feel they 'owe' constituents of color in some way, so they end up wasting tons of money just as ours does. This is in keeping with the general strategy of the Democratic party since LBJ--which you rightly cited. Namely, that keeping blacks on a plantation of low expectations and free handouts keeps them in the frame as Democratic voters.

And every day is a new revelation about the silliness of the AOC laughingstock. From the corruption in her staff to her utter hypocrisy on carbon footprint to the way the co-founder of Greenpeace called her out on being a total idiot.

Oh wait. You intended irony. Too bad for you that your little outburst is too close to the truth to be funny. ;)

Does it seem like there is more ghetto low-mindedness around today than in times past? Most of these shootings are over the most paltry causes. The urban culture seems very low right now, very coarse. Do they ever read books or just use social media on their smartphones 247? What to do to elevate the culture. To foster a life of the mind in these kids so they can get past the adolescent/teen years of impulsiveness and look forward to more meaningful lives. Access to handguns is relevant because if these were just fistfights they wouldn’t take a life and ruin another.

^^^^ Nobody reads books. Shut up grandpa or no applesauce for you tonight.

That's where you're wrong. It's not a culture really, more like a cargo cult. Utterly materialistic and devoted to greed, murder, and rape. And these are its good points.

Like every other bridge in the area,warped and seriously in need of repair.

“Prevention falls into the hands of the parents and personal integrity, responsibility.” All of which are missing in the negro culture.

I don’t think those shooter girls were into real penis, just the battery operated and strap on variety.

When ignorance is spouted, ignorance must be addressed. ANONYMOUS (03/05/2019 @ 2:07 PM), grab a strawberry pop, and a bag of Cheetos, and listen so very carefully:

I’m assuming that when you briefly take a break from doing the knuckle shuffle on your piss pump, while smelling your moms underwear, you have plenty of time to provide keen analysis on the doctrine of urban street warfare? I further assume you believe such a doctrine exists and dictates that officers under fire should stand in place, without cover, to provide easy targets for these fine examples of natural selection that perpetrated this violence?

Better yet, would you prefer to lose another one of these extremely brave, underpayed, heros that keep your mothers basement nice and safe for you? Or are you the type that sits back while these folks along with other taxpayers subsidize your stellar existence so that you may bestow such insightful observations, street knowledge, and tactical prowess on the rest of us??

I suggest you sign yourself up for one of the many KCPD academy classes taking place this year (If you even remotely come close to having the education and fortitude) then you can show the honorable 1350+ officers working in this fine city how it’s really done? I won’t be holding my breath, as those fine men and women possess more courage, wisdom, and passion on a daily basis than you will in a lifetime.

Suggestion Magnum.......When it comes to adult matters and those involving life and death, it is best to leave that to the professionals. How about using that borderline IQ to review some video games or online chat rooms?