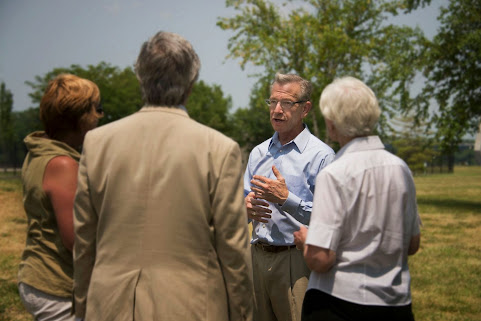 Kansas City 2nd District Councilman Dan Fowler has earned a solid reputation as a nice guy lawyer who keeps things pleasant at City Hall. However, as the upcoming election approaches he's in jeopardy of losing his 12th & Oak job whilst questions about a sketchy land deal abound.

UNDER THE RADAR, COUNCIL DUDE DAN FOWLER SUFFERED EPIC BLOW BACK OVER A LOSING KCMO LAND DEAL THAT FIZZLED AMID QUESTIONS ABOUT CONFLICTS!!!

Normally these land buy backs are the most boring aspect of council biz but the purchase merited some investigation and a surprising amount of chatter from the Council this week. Check ordinance #190203 that shows KCMO taking a $300K hit to start with more payback required moving forward.

Not so fun fact . . . This cash is spilling out of the beleaguered Water Department.

"We've got people who work 60 hours a week coming to public meetings literally crying because they can't pay their water bill but we're throwing away money right and left without any examination. If we want to try and bring water bills under control and make sure there's more accountability for this department -- It starts with closely watching the terms of this kind of deal."

And then it got worse for Council Dude Dan . . .

He seemed to be want to quickly pass the motion.

But then his council friends noted that the pricey City Hall purchase deal is with Port KC . . . Well, Council Dude Dan Fowler is also a commissioner with Port KC as well.

Now, ethics at City Hall is always good for a laugh . . . However, even insiders suggested that it would have been prudent for Councilman Fowler to sit this one out and recuse himself from the discussion given his connections to both sides of this equation.

SHOCKINGLY, THE ROUTINE LAND DEAL WAS SHUT DOWN WITH COLLEAGUES RAISING THEIR EYEBROWS IN COUNCIL DUDE DAN'S GENERAL DIRECTION!!!

We won't jump to any conclusions and we assume that Council Dude Dan's heart is pure.

Council sent this deal back to the Finance Committee for further investigation  and probably one closed meeting screaming session. Councilman Fowler has another chance to opt out or keep pressing forward . . . Water bills are likely to continue to skyrocket either way.

More importantly . . . It should be noted that Councilman Dan Fowler is the most vulnerable guy on the 26th floor as Kevin McEvoy is running a hardline RIGHT WING NORTHLAND CAMPAIGN that wants to bring Trump-Style politics to the Council chambers. As the primary looms, it'll be interesting to see if the "conflicted" image of nice guy Dan Fowler holds up against his much meaner opponent.

He's another airport dude. His replacement might not be ready for prime time but it's worth a look.

2nd district is the armpit of Kansas City but I'm surprised Dan didn't have a more established challenger. He should make it past this guy but not by much. He better get on his bicycle and go to those meetings. Maybe ask Deb Herman to give him an equally mean nickname.

He's a sly guy all the way. But his opponent doesn't have any money to get his message out. Almost too late, this is his chance if he takes it but without any cash for mailers or Internet ads. It won't do him much good.

Deb Herman will decide this one. I hope Dan is ready to kiss her ring and whatever else she has in mind.

Dan is a good guy, he will win easily!

Why all the make-believe concern about underhanded unsuccessful business deals and ethics concerning politicos in KCMO?
This is actually how all of these folks regularly act and have been conducting the public's business their entire terms.
The list of "projects" involving incompetence, insider dealing, self-promotion, and looking out for campaign contributors, and all with terrible results for the public is as long as your arm.
Election time just gives everyone a chance to take a little brief peek behind the curtain.
You'll all be in the dark again soon enough.
It never changes.

Captain Taco was a fictional creation of Teresa Loar and Rick Moore.
Sad no one ran against her for council.

Our outrageous water bills should be a top focus of candidates, the council and the mayor but none of them give a damn.

quit using so much water. ever heard of conservation?

gee that was easy