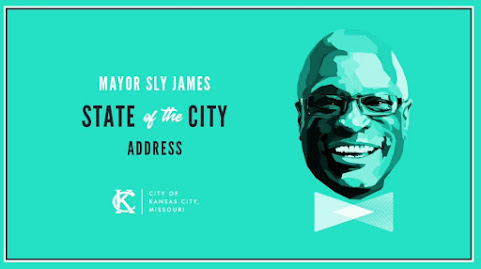 Throughout his tenure the local media has been complicit in helping to push his agenda whilst promoting a phony image of this town's mayor as an affable, fun-loving politico rather than accurately revealing the often angry, conflicted and menacing side of the City Hall honcho.

Even worse, national media seems to be promoting this narrative as well.

However, all of the king's horses and all of his men can't put Mayor Sly's broken local reputation back together again. 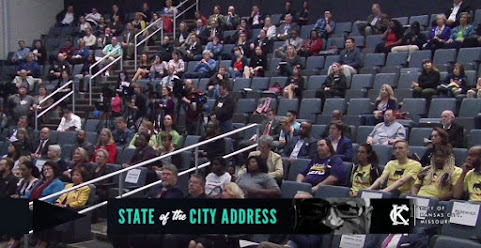 Look around and remember that half of these people were PAID to attend.

NOTICE MOST OF THE SPACES RESERVED FOR THE CITY COUNCIL ARE EMPTY!!!

The Mayor is concluding his tenure with a whimper and now stands as not only a lame duck but also a deeply unpopular politico who wasted every bit of his political capital in service of a oligarchic agenda that striped away funds from the less fortunate and enriched his corporate and developer buddies.

For as long as they keep it posted, here's the full context of the Mayor's talk with more shots of the tiny crowd that listened to his remarks.

The speech was a dud. Just a bunch of campaigning for Pre-K. Nothing of substance. KC will be better off when he's out of office.

I was glad to see some council members there, at least a few showed respect even if they don't agree with the Mayor. The ones who skipped look petty and jealous.

Sly's supporters are few now. But they do have a lot of money. Think about it.

Our mayor would have done well to remember to be nice to people on the way up as those same people will still be there on the way down. More than one fellow attorney has commented about helping Sly navigate the law during that phase of his career only to find that he "doesn't recognize them" in the hallways of City Hall. Not a good idea!


@9:53 You mean like the what jealous and petty democrats did to Trump including Sly James. Hypocrite.

"Respect" for this buffoon who's wrecked this town? Who in the hell are you?

This town is shittier because he was Mayor.

Fitting end to the reign of our clownish local Nero. While the infrastructure crumbled and the city became a leader in violent crime, Mayor Bullhorn fiddled with his developer cronies and played in his downtown amusement park.

Surely there are ambulances that need chasing, Sly. Adios.

Or was it half full?

The murder mayor is about to leave the building.

Net net, Sly had the potential to be the moderating influence of a Council which was composed of east side thugs who whole purpose was to get a majority who would support east side pet projects at the expense of basic City Services and Safety.
The City needs Police Officers but the number of Police declined over the past 8 years and crime increased. The City needs basic road repair, snow removal, street lamps, etc. Instead, we got deferred maintenance.
What did we get??? 18th and Vine, Jazz Museum, Linwood Grocery, MLK, etc.

Well at least now Sly can stop paying the rent on that unoccupied Apartment in KC and stop the pretense that he doesn't live in OPKS.

Your just a bunch of Icky Poopy Heads who don't recognize the Greatest Human Being that ever lived!

Poop on all of you, you don't deserve Mayor James!

What a horrible post to leave at the top of this negative and cynical blog. I am absolutely convinced that some of the readers here I hate Kansas City and want to see the worst for our future. Thankfully that's not going to happen. Counting crowd size is such a childish and trivial matter to put before the public. Again I wouldn't have even bothered to respond if some people didn't notice this and pointlessly talk about the inane chatter on this blog and the criticism of one of Kansas City's very best elected officials to ever serve.

His critics are Petty and inconsequential and like tkc haven't done much to push this city forward instead only bring divisiveness and contentious criticism two people who are trying to do the most good. It really is a shame that some of the people who read this blog try to get in the way of Kansas City's momentum because it's just not going to work there are too many good people who want to see the city do better and don't feel obligated to oppose every bit of progress.

What I see from this post is nothing but ignorance. The blog ignores that the people in this audience are stakeholders and they are the most engaged and active residents in entire metropolitan area. It doesn't matter how many people are in the audience only that they are committed to keeping the city on the right track. What I see from this blog is nothing but scorm for those who have tirelessly committed themselves to helping everyone and not just one special interest. That's right those so-called tax Fighters really just represent another faction of ultra-rich conservatives who want their tax incentives but refuse to share the wealth and create more jobs and opportunity.

Of course there will be armchair critics who seek to pick everything apart but the fact is that none of you have many accomplishments to your name. What I see in mayor James is that he has built a solid resume of tremendous achievements for the city and set us up to do great things. Jolie Justus is going to continue that momentum and keep us going in the right direction. I expect that a lot of you people will do nothing but complain but I'm only leaving this comment so that those who read this blog will know Kansas City is a great place full of residents who want the best and want to help not just gripe all the time.

Geez I guess this guy is getting paid by the word now.

Sly is not all bad you know he started off wanting to do goodbye the schools but wasn't able to get any kind of support. I see the same thing is happening again. Don't know if Pre-K is the right thing but I can't say that the schools have the complete Trust of Voters either.

I hope it was worth it. If you ever had a shred of dignity or credibility you would hang your head in shame for defending this clueless, corrupt, incompetent clown show.

You're an empty mouthpiece. You are nothing but Mayor Bullhorn's human bullhorn, who pays no attention to valid concerns and can't stand the only place in town where the Downtown Clown's bullshit doesn't fly.

Find your self-respect wherever you left it. Your master is a joke, and you are less than that.

go4kc you can not force folks to worship your celestial bureaucracy of hacks. You are truly the worst kind of communist.
and an intolerable carpetbagging windbag.

Mayor Bullhorn's great achievements in ignoring violent crime, presiding over the distribution of favors to his cronies, jumping into bushes and becoming a human embarrassment while courting Amazon are his signature 'achievements.'

This fool deserves indictment, not credit or praise. If we had a newspaper with any backbone, Sly's buffoonery would have long since delivered him to his deserved destination, which is jail.

It's too bad that being the joke of the city will have to do.

Gopher's triggered and incoherent yet again. Get that man to rehab!

The FBI should be investigating the terminal airport project.

The people remember the Streetcar extension fiasco, the smart city that wasn't, the airport fix that melted down, the set ups for Burns and Mac and Black and Veatch. They remember the kowtow to KCPL and the Chamber, who really just wanted their own pet projects without too much work.

Yes, the people are measuring results now, wondering where the money went, while the rah rah calling itself momentum looks more ponzi than high integrity actions on behalf of all the people.

Final note, what is up with those bad taste bow ties and clash camouflage outfits. Any public figure that wears a bow tie most of the time is pretty much pre-revealing themselves to be no representative of the public or a businesslike manager. I don't think we will have to look at that much longer.

Can you say hollow

"Counting crowd size is such a childish and trivial matter to put before the public."

I agree, but don't blame me I didn't vote for Trump.

he should have tried to accomplish 1001 items while in office and see if one stuck without having a bunch of hair in it.

From City of Fountains (R.I.P.) to Shit Hole of The Great Plains

michael jackson really liked calling ppl ignorant, one of his favorite words, only thing i think of when i hear that word, an image of michael jackson's face tellin folks they are ignorant.

I honestly have to ask why he even gave the speech. He has to be blind and stupid to not be able to see that very few like him? He best hope his law firm can support him now because I think that's where he will finish out life in Kansas City. I really doubt he has any real friends in Washington outside of maybe Cleaver and I doubt Cleaver has any either. Stick a fork in him, he is done and a has been hopefully.

Hey GOKC or better known as Chris Hernandez your days are numbered at City Hall soon the only line you'll be waiting at will Be the unemployment line. Or maybe the welfare office

Any company meeting always begins with Safety.
Did Sly make the city safer?
Complete Colossal Failure.
Murder upon murder upon murder..As the world turns- the murders continue.
It’s time to recognize Safety as Priority One. Go ahead and build the airport... that was his legacy.
Airports and the Murder Rate.
And since he had so much free time- Arbitration.
We’re you able to arbitrate successfully Sly?

Where's the audit of "Open Spaces"? How many $millions did that cost the taxpayers? Where is the KC Star on the Open Spaces fraud?

Slie is a Bully and Egomaniac. Not a scintilla of difference from Trump.

To be fair, many more people were on there way to the speech but they were lost in potholes and never seen again.

Can sLIE be charged with their murders! Hahahahaha!

We hope this is the last time we see a letter like this.🤞🏽If renters suspect #HealthyHomesKC permit fees are the reason for a rent hike, we’ll need to know. We’re working on this on our end. More to come shortly. #Optimistic until otherwise.

Chris Hernandez/Go4KC after Sly is shoved out will go live with Byron where together they will spin tales of nothings to go along with their nothing scamming lives.

You're so proud of your life that you post anonymous comments.

^^ You're a lying thief Byron.